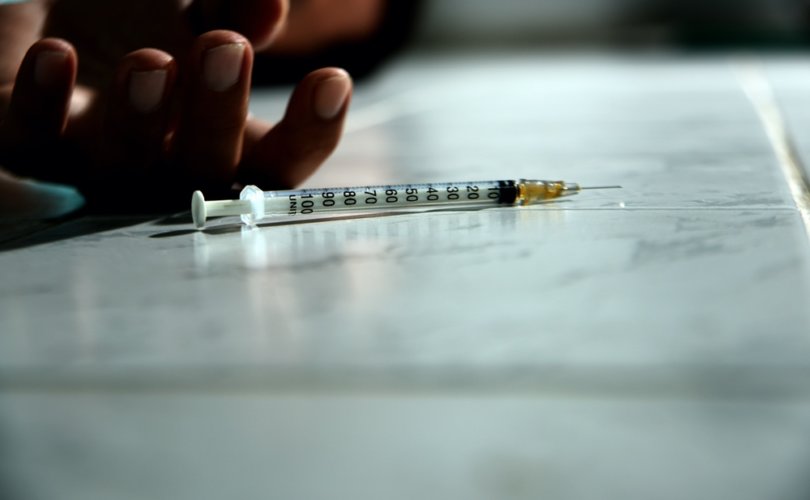 CANADA (LifeSiteNews) – A task force established by Canada’s Minister of Health to investigate the current drug crisis has officially recommended that all illegal drugs be decriminalized and that there be an “end [to] all coercive measures related to simple possession and consumption.”

The 33-page report, the first of two released this past spring by the Health Canada Expert Task Force on Substance Use, lists six recommendations to lead Canada in the “unprecedented and tragic drug toxicity crisis.” The Task Force was commissioned to provide expert advice on “alternatives to criminal penalties … with the goal of reducing the impacts of criminal sanctions on people who use drugs.”

The Expert Task Force gave eight recommendations which included not only decriminalization of the hard drugs, but also increasing the allowable amount for possession and for the possession limits to “be set high enough to account for the purchasing and consumption habits of all people who use drugs.”

Further, the Expert Task Force is recommending that all past drug infractions and criminal records “be fully expunged,” meaning “complete deletion, automatic, and cost-free.”

The drug crisis, the report explained, has “escalated during the COVID-19 pandemic,” but the measures the government is using are not enough to “deal with the systemic issues, stigma and racism that are fueling it.”

The task force identified the underlying conditions fueling the Canadian drug crisis. Specifically, the report explained that labeling someone a criminal for using illegal drugs “devalues and dehumanizes [them] by labelling them as immoral, ‘addicts’, or weak.” Most people who use hard drugs, it explained, do so for “an actual or perceived benefit and may not develop a substance use disorder or experience other drug-related harms.”

Incarceration is another factor that is fueling the drug crisis according to the report, as it is part of “historical and ongoing structural racism,” especially among Indigenous and Black populations. Youth who engage with hard drugs end up with a criminal record and then must “face major struggles to overcome the negative economic, social, and health impacts” of their actions. These youth, along with illegal immigrants, experience “structural racism” because of their illegal use of hard drugs.

“Drug criminalization leads to drug toxicity deaths in Canada,” the report continued. The illegal drug trade “directly and indirectly harms those who use drugs.” The hope of the Expert Task Force is that regulating the hard drugs, like the current regulation of cannabis, will provide less contaminated drugs. This, in turn, will result in less hospitalization costs.

The many folks who have an illegal drug abuse problem, the experts claim, are fearful to seek treatment out of fear of being reported, charged, and hence being labeled a criminal. Making the drugs easier to purchase and possess by legalizing their use will remove the stigma that comes with the label of “criminal,” help stop “structured racism,” and bring more people to accept treatment.

Health Minister Patricia Hajdu commenting on the report that “Parliament should decriminalize heroin … We are exploring all options. It is not a moral issue,” according to Blacklock’s Reporter.

In an interview with the Epoch Times, best-selling author Attorney Heather Mac Donald of the Manhattan Institute for Policy Research responded to Canada’s decriminalization considerations:

The second report from the Expert Task Force was released this past June. The first section entitled “Truth and Reconciliation in Canada’s Drugs and Substances Strategy” argued that “Canada’s colonial policies and systems cause harm” to the Indigenous. This harm, the report continued, is the “systemic racism” that “has perpetuated a legacy of intergenerational trauma and entrenched a public mindset that Indigenous people are incapable of managing themselves.”

This second report also called for “bold actions” from the government, which would include bringing all illegal drugs, alcohol, tobacco and cannabis under the same roof. Further, the experts believed strongly in “Mak[ing] equity a core principle and equity, anti-racism and anti-colonialism a priority area” in order to combat “drug toxicity.”

Recommendations such as “a full continuum of harm reduction,” providing a “safe supply” of hard drugs, and “avoiding language that reinforces stigma,” will all work to cure Canada of its “unprecedented and tragic drug toxicity crisis,” the report claimed.

According to studies done by the Angus Reid Institute, a Canadian “non-profit organization committed to independent research,” 59% of Canadians believe that drugs should be decriminalized.

Bill C-22, which was tabled in the senate on June 11, 2021, would begin implementation of the report’s recommendations.