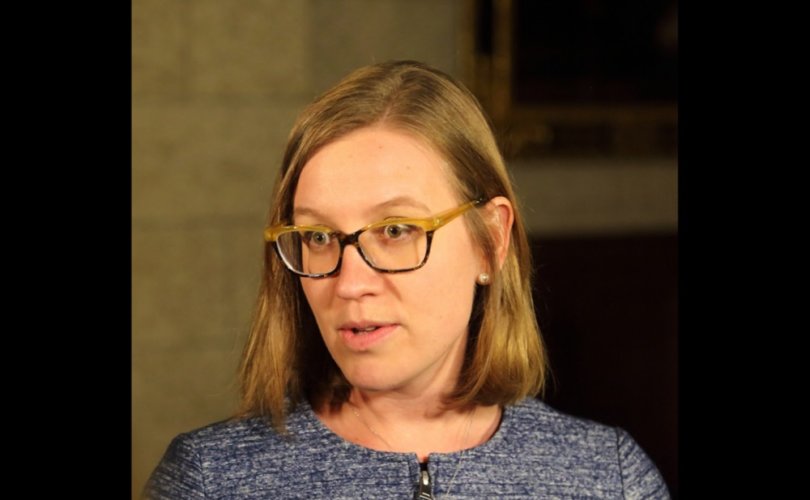 OTTAWA, Ontario (LifeSiteNews) – Canada’s minister responsible for families and children suggested that American women could come to Canada to abort their unborn children, should abortion become illegal in parts of the U.S. if Roe v. Wade is overturned.

Minister of Families, Children and Social development Karina Gould made the comment Tuesday during an interview on the Canadian state broadcaster TV show, Power & Politics.

Gould replied to show host Vassy Kapelos, when asked if American women could come to Canada to get an abortion, “I don’t see why we would not” allow that to happen.

“If they, people, come here and need access, certainly, you know, that’s a service that would be provided, we want to make sure that we’re still able to provide those services as needed to Canadian woman,” added Gould.

Gould’s remarks came a day after Politico published a leaked draft opinion from U.S. Supreme Court Justice Samuel Alito, indicating the court as a majority is poised to overturn Roe v. Wade, the nearly 50-year-old ruling that imposed abortion on demand on all 50 states.

Yesterday, the U.S. Supreme Court confirmed the authenticity of the unprecedented leak but said it does not reflect the court’s final opinion.

Trudeau on Tuesday publicly voiced his support for the killing of the unborn on-demand.

“Every woman in Canada has a right to a safe and legal abortion. We’ll never back down from protecting and promoting women’s rights in Canada and around the world.”

Most leftists’ responses to the leaked majority opinion have used language that suggests women – and not “pregnant people” – are the ones impacted by abortion restrictions, despite frequent claims that “men” can become pregnant.

“What if an unvaccinated American woman wants to come to Canada for an abortion?” tweeted Rebel News founder Ezra Levant.

What if an unvaccinated American woman wants to come to Canada for an abortion? https://t.co/ThO4BAC910

What if they’re not vaccinated? Will Canada still respect “a woman’s right to choose”, or are bodily autonomy rights on a sliding scale?

Currently, Canadians who have opted not get the abortion-tainted COVID jabs are banned from traveling by air, rail, or sea, and are unable to enter the U.S. unless they are American citizens. Canadian entry requirements for unvaccinated non-Canadians are also strict.

To choose what, exactly?

A woman doesn’t abort her own body. It’s not her body that is dismembered, crushed, poisoned, or suctioned to death.

She walks out of the clinic… someone else doesn’t because they were murdered.

Trudeau is ‘a death cultist who really does want to see more and more abortions, at home and abroad’

Campaign Life Coalition (CLC) Director of Political Operations Jack Fonseca told LifeSiteNews that he interprets Trudeau’s pro-abortion tweet as inviting “all the Americans in states where abortion will be criminalized in the future, to come to Canada to get free abortions paid for by us suckers, the taxpayers.”

“And I’m not even joking about that. When President Trump cut America’s foreign funding of abortions, Trudeau announced he was going to ‘make up the gap’ with Canadian tax dollars, and he did,” added Fonseca.

Fonseca told LifeSiteNews that Trudeau’s latest pro-abortion comments show “what an abortion-extremist” he really is.

“He’s a fanatic. He’s a death cultist who really does want to see more and more abortions, at home and abroad,” said Fonseca.

“He’s pure evil and has transformed the Liberal Party into the party of death.”

Fonseca noted that under Trudeau, Liberal MPs are banned from having pro-life views, which was not the case in the past.

“He constantly pushes to expand ‘access’ to abortion so that more unborn children can be murdered in Canada. He’s spending $700-million annually to commit abortions in Africa along with ‘sexual and reproductive health education,’” Fonseca told LifeSiteNews.

Fonseca said that Trudeau needs to be “removed from office as quickly as possible.”

As for Gould, in her Power & Politics interview she said the Trudeau government has already “exercised its muscle” in putting in place rules that in effect force abortion and other “reproductive health” procedures on Canadian provinces.

Indeed, in 2020 the Trudeau government reduced funding to the province of New Brunswick by $140,216 because the province refused to subsidize Clinic 554, its only private abortion facility, and the original site of the Morgentaler abortion center.

Gould also took a shot at Conservative Party of Canada (CPC) MPs who are on CLC’s “green light” list as pro-life supportable, saying that Canadians should be protected against such “forces.”

CPC Interim leader Candice Bergen reportedly told her MPs to stay quiet on the Roe v. Wade draft leak, despite the fact the party is in the middle of a race to elect a new leader, which will happen on September 10.

Abortion persists in Canada due to ‘legal vacuum’

Neither Canada’s Charter of Rights and Freedoms nor the Supreme Court of Canada have ever established a right to abortion on demand.

However, Canada as it stands lacks any legislation prohibiting abortion, even right up until birth.

CLC National President Jeff Gunnarson said in a recent email to his organization’s followers that the potential overturning of Roe v. Wade means “pro-life advocates in Canada are now encouraged to work even harder to bring legal protection to children in the womb from conception onward.”

“Abortion in Canada still persists in a legal vacuum to this day, leaving the preborn with no legal protection.”

Abortion was in effect legalized in Canada in 1969 when then-Prime Minister Pierre Trudeau (the father of current Prime Minister Justin Trudeau) passed a heavily criticized Omnibus Bill which amended the criminal code to allow abortions to be done in hospitals under permissive circumstances, with the approval of the hospital therapeutic abortion committee (TAC).

“In 1990, the Conservative government under Prime Minister Brian Mulroney introduced Bill C-43. It was the government’s attempt to bring in a pro-abortion law in pro-life clothing,” Jim Hughes, President Emeritus of CLC, told LifeSiteNews last year.

“It would not have saved even one single child,” Hughes continued. CLC worked with Senator Stanley Haidasz and others and were successful in having Bill C-43 defeated by a tie vote in the Senate.

Trudeau for years has professed his support for abortion, and since taking office in 2015 his Liberal government has put forward many pro-abortion policies.

Recently, Trudeau promised to strip pregnancy resource centers of their charitable status because they promote life instead of abortion.

Trudeau’s Liberal Party MPs all voted to keep abortion in Canada legal, with Trudeau taking to Twitter to blast the CPC MPs who stood up for life.

The U.S. and Canada are two of only seven countries where late-term abortion more than halfway through pregnancy is legal.