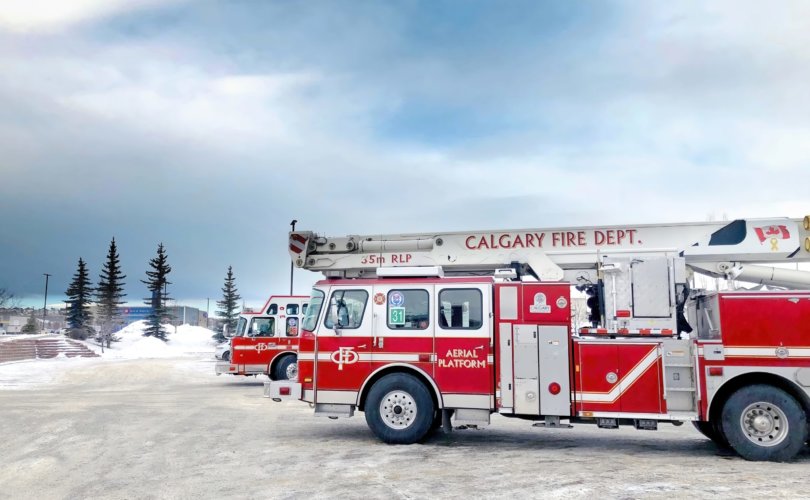 CALGARY, Alberta (LifeSiteNews) – A group of 19 firefighters suing the Calgary Fire Department (CFD) and the city over COVID workplace jab mandates say their lawsuit has had success in terms of causing city officials and those in the fire department to sweat.

“I do think it’s making an effect for sure,” Stephen Dabbagh, the leader of Firefighters 4 Truth lawsuit, told LifeSiteNews.

“From what I’ve heard, it’s the number one talk amongst guys in the fire department right now, I can tell you that.”

Dabbagh is a devout Catholic father of four who worked for 20 years as a firefighter for the CFD, most recently as a fire captain. He resigned under duress on December 8, 2021, over the department’s COVID vaccine policy.

He told LifeSiteNews that the group’s lawsuit is garnering lots of feedback nationwide.

“We’re definitely getting lots of feedback across the country, particularly from firefighters and other municipal workers, to see what we are doing to seek justice,” Dabbagh told LifeSiteNews.

Dabbagh said a few weeks ago to LifeSiteNews that the lawsuit came about because it was time to stand up to the “political and ideology tyranny of these mandates.”

LifeSiteNews first reported that on July 7 the group served the City of Calgary and the CFD with the Statement of Claim in the Court of Queens Bench of Alberta. The firefighters are seeking $2 million in damages each for mental duress, violations of their Charter rights, violations under the Criminal Code, and “Punitive and exemplary damages.”

Dabbagh said that the group has been getting calls from firefighters, municipal workers, and others from all over the country, including, Ontario, PEI, Saskatchewan, and Vancouver asking them for advice on how they can fight back against unjust mandates.

According to Dabbagh, he has noticed in the past few weeks the “political narrative changing in the province” when it comes to COVID mandates.

“I have hope that things will be rectified sooner or later,” Dabbagh told LifeSiteNews.

“Now is the time for people to come together and act.”

The group has launched a website called firefighters4truth.com at which they include a link to their GiveSendGo fundraiser, which will help them pay legal fees.

Dabbagh said that funds raised are “going towards the legal fight,” as they are “dealing with large legal costs,” noting, however, that is a small price to pay for doing the right thing.

“We are encouraging people to do the same thing in their local municipalities to hold the elected officials accountable,” Dabbagh said.

According to the group’s lawyer, Leighton Grey, who is also behind other high-profile lawsuits in Canada concerning employee vaccine mandates, the firefighters’ lawsuit might result in city workers taking legal action.

Grey told LifeSiteNews recently that he has had interest from a large group of City of Calgary workers who are looking to launch a lawsuit against the city’s COVID vaccine mandate.

The City of Calgary in the fall of 2021 mandated jabs for all city employees, with the mandate for firefighters coming into force in early October. All city employees had to show proof of vaccination status, submit to invasive and frequent COVID tests, provide a reason for an exemption, or risk being placed on unpaid leave.

While the COVID vaccine mandate was “suspended” by the city in March 2022, Dabbagh told LifeSiteNews that the lawsuit is needed to prevent these types of dictates from coming back.

Recently, an appeals court nullified contempt charges against Alberta pastor Artur Pawlowski and his brother Dawid for protesting COVID health rules, ruling that a “not sufficiently clear” May 2021 ban on virus protests did not apply to them.

Dabbagh said that it is his and the group’s hope that police take a stand and start to investigate city officials and CFD chiefs who he says were complicit in enacting and enforcing COVID mandates.

“City managers and chiefs, I want to encourage police to stand up and go after the bad guys, those who should have upheld the law and not gone along with it (COVID mandates),” Dabbagh told LifeSiteNews.

“They chose to basically commit criminal assault by forced testing, and such … they put workers in an unnecessarily dangerous situation … there is no way they could give us informed consent.”

Dabbagh and a group of around 100 other Calgary first responders last September drew the ire of the city after holding a silent protest against COVID jab mandates in front of city hall.

He noted that the first protest served as the catalyst for fellow and former co-workers to fight against the city’s COVID vaccine policy.

At the time, Calgary Fire Chief Steve Dongworth called those employees protesting COVID jab mandates a small group of people “in the process of advancing their agenda.”

Alberta Premier Jason Kenney called protesters at hospitals and other areas against mandates last year an “outrageous small minority” and threatened to bring the full extent of the law on them should they block roadways.

Kenney will soon be replaced as premier and leader of the United Conservative Party of Canada (UCP) after announcing he will step down due to lack of support, no doubt due to his going along with COVID mandates.