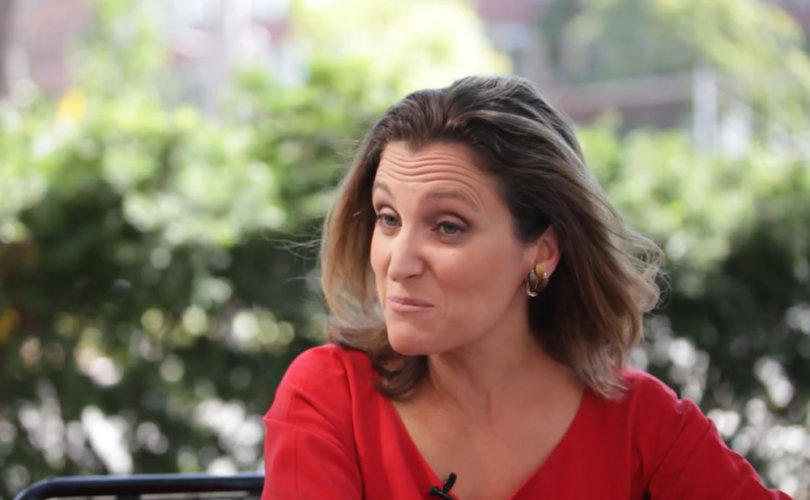 Canadian values include “feminism and the promotion of the rights of women and girls,” Chrystia Freeland said in an address laying out Trudeau’s vision for Canada’s international role.

And when more nations adopt those values, the world will be “safer and more prosperous,” she added.

“It is important, and historic, that we have a Prime Minister and a government who are proud to proclaim themselves feminists. Women’s rights are human rights,” Freeland said.

“That includes the right to safe and accessible abortions,” added Freeland.

“These rights are at the core of our foreign policy.”

And Canada must lead the way in promoting global LGBTQ rights as well, Freeland said.

“Canadian liberalism is a precious idea,” she noted.

“It is our role to set a standard for how states should treat women, gays and lesbians, transgendered people, racial, ethnic, cultural, linguistic, and religious minorities, and of course, indigenous people.”

That’s why the Trudeau Liberals are “energetically pursuing a two-year term on the UN Security Council,” Freeland said.

“We seek this UN seat because we wish to be heard, and we are safer and more prosperous when more of the world shares Canadian values.”

The Liberals are also about to announce Canada’s “first feminist international assistance policy, which will target the rights of women and girls as well as gender equality,” noted Freeland.

“We will put Canada at the forefront of this global effort.”

Abortion access as the “core” of the Liberals foreign policy is no surprise, given Trudeau’s ideological fervor for abortion.

The Liberals announced March 8, which is International Women’s Day, that they were earmarking $650 million over the next three years to promote and provide abortion as part of Canada’s international development aid.

That includes funding campaigns to legalize abortion in countries where it is now banned, or as a Liberal backgrounder noted, “removing judicial and legal barriers to the fulfilment of sexual and reproductive health and rights.”

The Liberals had earlier donated $20 million to the global abortion fund “She decides,” which the Dutch government initiated after U.S. President Donald Trump reinstated the Mexico City Policy.

But Canada’s foreign policy on abortion “is at odds with many developing countries and member states at the United Nations who don’t share Trudeau’s ‘value system,’” says Campaign Life's Matt Wojciechowski.

“There is no such thing as a universal ‘right’ to abortion regardless of how often the Liberal government repeats this lie,” he told LifeSiteNews.

“The Liberals’ arrogance in pushing this culture of death around the world is unbelievable. They are blatantly engaging in ideological colonization, something the leader of Trudeau’s faith, Pope Francis, has denounced many times,” Wojciechowski said.

“Additionally, to claim that exploiting vulnerable and impoverished women by funding organizations who profit from the killing of children before birth is somehow a human right is sickening,” he added.

“I wonder how many Canadians agree with the Liberals that abortion is a cherished Canadian ‘value?’”

Wojciechowski pointed out that the Conservative government under Stephen Harper did not fund abortion as part of its international aid.

Now that the Conservatives are the official opposition, “I urge them to hold this government to account and to call Trudeau’s abortion policies what they are: ideological colonialism,” he said.

Also contact your Member of Parliament, and if you are not sure who that is, check the Campaign Life website here.