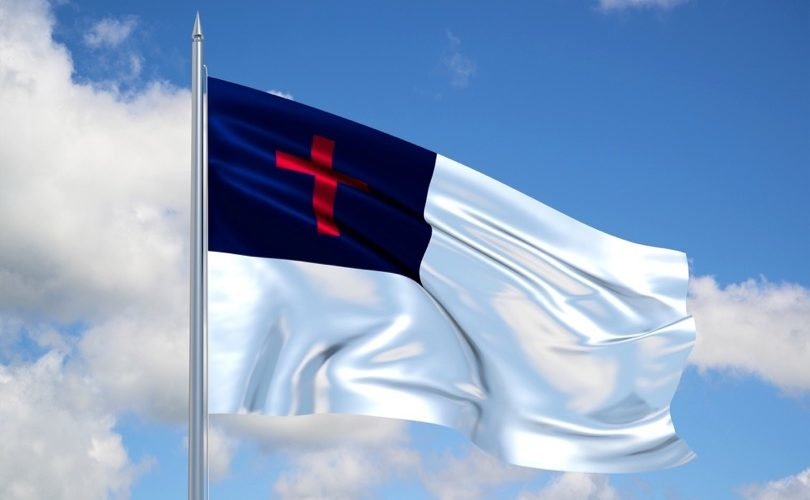 ST. JOHN’S, Newfoundland, March 24, 2016 (LifeSiteNews) — A pro-family critic is saying homosexual activists have displayed their intolerance and bigotry towards Christianity in denouncing the raising of a Christian flag outside Newfoundland’s Confederation Building.

St. Stephen the Martyr Anglican Network Church asked the government to raise the Christian flag to mark Easter week, where Christians commemorate the death and resurrection of Jesus Christ.

The white flag contains a blue box with a red cross inside. The white represents Jesus’ purity, the blue the waters of baptism, and the red the blood that Jesus shed to save sinners.

Premier Dwight Ball, who has participated in pride parades and various pride flag raisings,  told reporters that when the Christian church first asked permission to fly the flag, no one saw it as a problem.

“The request came in asking to fly the Christian flag during Easter Week, during Holy Week. That request was granted,” he said. “This was about being tolerant and open to the views of all people in the province.”

But when the flag appeared on the courtesy flag pole beside Confederation Building, homosexual activists and supporters were outraged.

Gerry Rogers, MHA for St. John's Centre, went as far as saying that the flag “represents a very divisive approach to Christianity, that it's homophobic, that it's against choice for women.”

Homosexual activists and supporters appeared to take special aim at the Anglican church’s website which links to some resources about helping homosexuals overcome same-sex attraction. The church website also has a link to LifeSiteNews.

But Rev. Howard Hynes, pastor at St. Stephen’s, defended the flag, saying that he was shocked that people have reacted so negatively.

“It seems like, as Christians, even in this part of the world, we're facing more and more opposition and hostility,” he told CBC News.

“Frankly I don't understand why, when we raise a flag with a cross on it — or we raise a cross — that it incites such a visceral reaction from people who say all kinds of nasty things about us or about others who raise the flag,” he added.

Hynes said that as Christians, he and his congregation “stand for love and peace.”

“Look, we are a traditional Christian church, there's no doubt about it. We uphold the tenets of scripture, but our church, we welcome everyone,” he said.

Gwen Landolt, National Vice-President of REAL Women of Canada, told LifeSiteNews that the controversy over the flag caused by homosexual activists and supporters is “just a preamble to the persecution of Christians.”

“And that is exactly what homosexual activists want: They want Christians to be pushed out of the public square, and to have no voice at all in society.”

Landolt said that despite being champions of acceptance and tolerance, the outrage over the flag shows that “homosexual activists are the most intolerant and discriminatory group of people in all of Canada.”

“They will not tolerate anybody to have an opinion that is opposed to their own. This is contrary to everything that we know as ‘Canada.’ Who are they to decide that Christians can't put a flag up when they themselves insist upon their own rainbow flags being put up everywhere, from one end of the country to the other?”

“And this just shows that there is no balance, there is no equality when it comes to their demands. There is simply a totalitarian desire to stamp out anybody who has a contrary opinion,” she said.

Meanwhile, the Christian flag was taken down yesterday and replaced with provincial and national flags flown at half mast to honor the victims of the recent Belgium terrorist attack. It is unclear at this point if the Christian flag will be raised again.

Landolt said that Christians need to stand up and demand that the Christian flag be put up again after the period of solidarity with Belgium has been accomplished.

“I would tell Christians, ‘Don't tolerate this intolerance. Stand up and make sure that the legislature knows that it is unspeakable what homosexual activists are doing, namely trying to push Christianity out of the public square.”

“Most Canadians are Christians, according to Stats Canada. They ought to have the same rights to speak out and raise their flags on public property as homosexuals have. Christians cannot let this continue. They have to fight back,” she said.