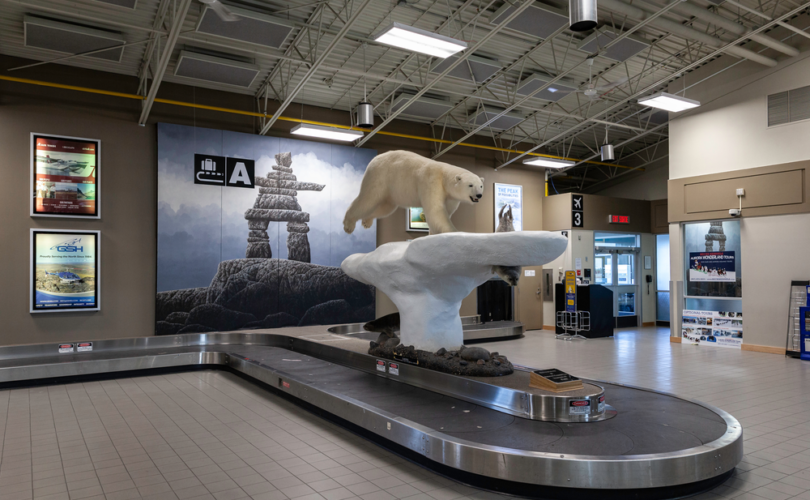 Inside the Yellowknife airport terminal in the Northwest TerritoriesShutterstock

YELLOWKNIFE, Northwest Territories (LifeSiteNews) – The Canadian government detained at least two Russian Federation nationals at a northern Canadian airport based on their nationality.

Canadian Minister of Transport Omar Alghabra made the announcement Thursday via Twitter.

“A charter aircraft that carried Russian foreign nationals has been held at the Yellowknife airport. We will continue to hold Russia accountable for its invasion of Ukraine,” Alghabra wrote.

According to reports, the plane was on its way to Resolute, Nunavut, to drop those on board off for a planned overland arctic expedition.

This past Sunday, Transport Canada banned all Russian aircraft, or any aircraft owned by Russians, from flying in Canadian airspace on account of Russia’s recent invasion of Ukraine.

Transport Canada said that there were no issues with the flight until the government learned there were Russians on board.

Russian President Vladimir Putin’s invasion of Ukraine has been met with worldwide condemnation and heavy economic sanctions against the Russian Federation.

The conflict has also resulted in harsh treatment of people who are simply Russian nationals and have nothing to do with Putin’s regime.

Russian athletes who have lived in the United States for some time are now being targeted due to their ethnicity. Hockey equipment giant CCM announced earlier this week that they were dropping all marketing campaigns for Russian NHL star Alex Ovechkin, along with all other Russian players, because of Ukraine-Russian conflict.

“Trudeau’s minister, Omar Alghabra, has just created a no-fly list based on Russian ethnicity/citizenship — not on any crime,” Levant wrote Thursday.

“This same Omar Alghabra called for the legalization of the Hamas and Hezbollah terrorist groups.”

Russian and Ukrainian officials, while in talks in Belarus, have agreed to develop safe corridors for Ukrainian civilians to evacuate, as well as for aid to enter freely.

A recent LifeSiteNews blog highlights how Ukraine President Volodymyr Zelenskyy said in 2019 that Canadian Prime Minister Justin Trudeau was a reason he got into politics.

Media outlets RT News and Sputnik are owned by the Russian Federation and operate news channels in many countries. Because of the Russian invasion of Ukraine, the companies have now been banned from the airwaves in Canada.

Maxime Bernier, the leader of the People’s Party of Canada (PPC), recently criticized the head of the Conservative Party of Canada (CPC) for demanding the federal government ban Russian news channels.

During World War II, Canada, like the U.S., forced many German and Japanese nationals, many of whom were also citizens of their new nations, into internment camps on the pretext of being at war with Nazi Germany and the Japanese Empire despite the fact most of the prisoners had nothing to do with the evil regimes of their homelands.