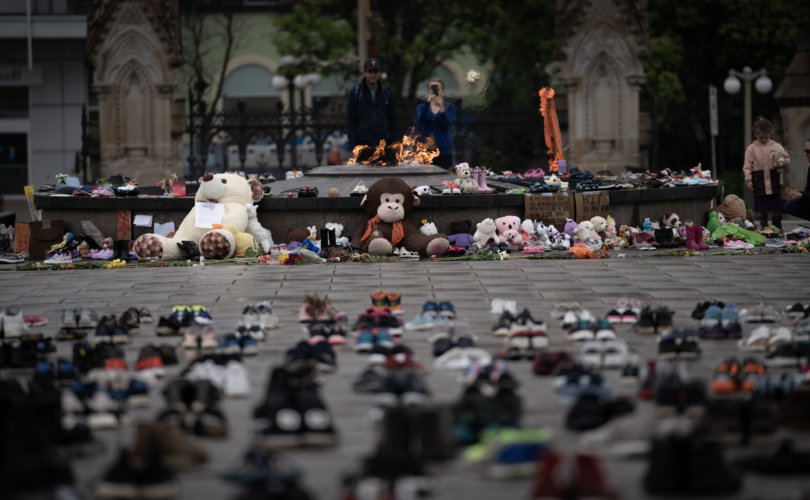 KAMLOOPS, British Columbia, June 15, 2021 (LifeSiteNews) – In the light of the recently discovered unmarked graves of 215 children at the Kamloops Residential School once run by the Catholic Church, dark accusations have been directed at the Church, yet a report from the early 1900s by the medical inspector at the time reveals excessively high rates of tuberculosis among Indigenous children and a substantial lack of proper financial support from the state.

The Canadian Medical Inspector in place shortly after the beginning of the 20th century penned an explosive report that the government refused to publish, documenting the shortcomings of the state-funded residential schools and how state failings were allowing tuberculosis infections to spread widely.

Dr. Bryce and the residential schools

In January 1904, after an already distinguished medical career, Dr. Peter H. Bryce was made the Medical Inspector to Canada’s Department of Interior and Indian Affairs and specifically entrusted with the health records of the Indigenous peoples of Canada.

As part of his role, Dr. Bryce studied and reported on health issues in the Indigenous bands, drawing up an annual report. In 1907, he conducted a special inspection of 35 Indigenous residential schools and wrote a detailed, damning report on the conditions.

However, his recommendations from the report were not published by the government, which found the content too embarrassing because it contained a detailed summary of the schools’ “sanitary condition.” Bryce uncovered some shocking revelations and later published his findings in a 1922 short book entitled “The Story of a National Crime.” The report and recommendations were also leaked to the press after the state cover-up.

The schools were described as being in a “defective sanitary condition” that included irregular exercise, insufficient ventilation – which was often closed during the winter for budget savings – and the admittance of students “already infected with contagious diseases.” Bryce did not hold back from his condemnation of the government funded schools.

It was “almost as if the prime conditions of the outbreak of epidemics had been deliberately created,” he wrote.

Indeed, this description proved itself in the mortality figures he came across, with particular reference to tuberculosis. His report noted that “of a total of 1,537 pupils reported upon, nearly 25 percent are dead, of one school with an absolutely accurate statement, 69 percent of ex-pupils are dead, and that everywhere the almost invariable cause of death given is tuberculosis.”

A subsequent study of residential schools in Calgary, completed two years later, found that “tuberculosis was present equally in children at every age,” and “in no instance was a child awaiting admission to school found free from tuberculosis.” Bryce referenced an “excessive mortality” in children ages 5-10, noting that infection was primarily contracted in their family homes and then spread in the schools.

Canada was already experiencing high child mortality rate, with rates for children under five being 296.75 deaths per 1,000 births in 1900. The First Nations people themselves have historically been noted to be less resilient against infectious diseases, such as influenza epidemics, measles, and smallpox.

Bryce recommended larger school facilities, moving the location to be closer to the pupil’s families, and having nurses trained to deal with TB.

Significantly, though, he asked that the government take on the “complete maintenance and control of the schools, since it had promised by treaty to insure such.” Such a desired change is significant, since as LifeSiteNews noted in a recent article on the Kamloops case, while current attacks are being made against the Catholic Church, it was actually at lack of proper funding from the state that led to poor nutrition, poor building quality, and high infection rates.

Bryce’s investigations into the effects of the school conditions were hampered on a number of levels. First, teachers and school officials were reluctant to work with him or provide details on the condition of former school pupils. However, his chief opposition was from the people who had tasked him with reporting on the schools, namely those in the department who showed Bryce “active opposition.”

His superiors not only refused to publish Bryce’s recommendations but to act upon them, meaning the conditions that Bryce was so shocked at seeing simply continued. Government officials were “cognizant of the potential cost, both in federal dollars and in parliamentary and possibly public criticisms and headaches.”

The political inaction, in the face of Bryce’s evidence of high death rates and warnings about future deaths, simply evidenced what he described as “the indifference of politicians to the needs of the native populations.”

In fact, the focus on cost savings was something mentioned by the National Post, which noted how the government’s “Department of Indian Affairs refused to ship home the bodies of children for cost reasons.”

Speaking to CTV News, historian and Trent University professor John Milloy described Bryce as a whistleblower and one who “made the mistake” of so accurately documenting the failures of the state. Milloy noted how Bryce was “hounded” by his superiors for the “rest of his career” after his whistleblowing.

Cindy Blackstock, executive director of the First Nations Child and Family Caring Society of Canada, also highlighted the importance of Bryce’s work and the devastating result of the government rejection of it, telling CTV, “Had he been listened to, I think it’s fair to say thousands of children’s lives could have been saved.”

Bryce’s demands for change in the system were not financially unreasonable by any means. In fact, health care funding allowed to Ottawa citizens alone was around three times higher than that given to all the First Nations people in Canada.

“Dr. Bryce spoke out to try to save the children’s lives. It would have cost 15,000 out of a national budget of over 100 million,” Blackstock wrote. “Canada said no.”

The recent resurgence of Dr. Bryce’s century-old warning about the state’s poor management of the residential schools adds some insight into the situation surrounding the 215 graves recently discovered at Kamloops residential school, serving to shed light on the conditions. The school was open from 1890 to 1969, and at its height, Kamloops had more than 500 children enrolled during the 1950s and was once the largest school in the residential system.

Despite the size of the schools and the high child mortality rate at the time, the National Center for Truth and Reconciliation has documented records for only 51 children who died at Kamloops, between 1900 and 1971, although the number is far short of the 215 recently discovered bodies.

Bryce’s reporting should prompt current reports about Kamloops to re-examine the issue and address the poor school conditions promoted by the state before attacking the Catholic Church. As yet, the 215 bodies have yet to be properly examined, and no details are known about the children buried there. But with additional information about the historical situation, the circumstances of their deaths might begin to be understood more.