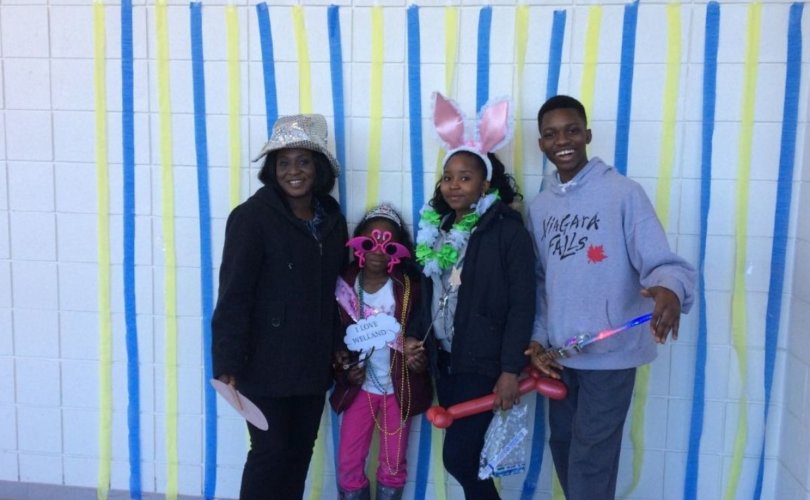 WELLAND, Ontario, September 18, 2019 (LifeSiteNews) ― A Christian family, who converted from Islam and are now illegal refugees in Canada, is in danger of being deported back to their native country of Nigeria where they say they face certain death for abandoning Islam for faith in Jesus Christ.

“They face a ‘fatwa’ (a pronouncement of death) against them for converting to Christianity from Islam,” Randy Lorenz of Canadian Aid to Persecuted Christians told LifeSiteNews. “They believe they face certain death if they are returned to Nigeria. They are quite fearful.”

Morufat Ogunkoga and her children Viktor, 16, Hephzibah, 14, and Rejoice, 10, are due in immigration court in Mississauga, Ontario, tomorrow afternoon. LifeSiteNews has been credibly informed that they might be taken into custody during the hearing.

Ironically, both Hephzibah and Rejoice were featured in a CBC News photograph with Canada’s Prime Minister Trudeau, with an accompanying caption saying they were his supporters. In reality, they and a spokesperson for the family had delivered a plea to Trudeau in person when he appeared in Niagara-on-the-Lake last month.

The Ogunkoga family has lived in Ontario’s city of Welland, near Niagara Falls, since 2018. The family members are converts to Christianity from Islam and allegedly fled Nigeria after a warning that Morufat’s father, a leader in an Islamist extremist group, wanted to harm them.

A spokeswoman for the Ogunkoga family told LifeSiteNews that the warning had come from Morufat’s own mother.

“They ran because her mother wrote her a letter saying that she is very disappointed that (Morufat) is a Christian, but she must run because her father wants to kill (her) to become higher in the organization,” Sonya Wierenga told LifeSiteNews.

She added that Morufat’s mother has since died.

Wierenga is the executive director of Rose City Kids, a charity for which Viktor Ogunkoga is a volunteer. Wierenga explained that she acts as a go-between, facilitating communications between the Ogunkoga family and their immigration lawyer, Peter Solano.

Wierenga alleged that Morufat’s father had harmed both Morufat and her son Victor before leaving Nigeria. The mother of three was burned with an iron, and Victor was cut with a knife. She also alleged that someone in the extended family had arranged a Muslim marriage for Hephzibah before their flight.

Christian groups and activists have called for other Christians to support the Ogunkoga family in their bid to stay in the country. Lorenz told LifeSiteNews that he believes the government is not taking the appropriate time to establish the family’s humanitarian status or to do a proper risk assessment.

“They’re trying to boot (Morufat) out of the country before then,” he said.

CitizenGO Canada held a rally in support of the family in Toronto on September 12. Approximately 50 people stood outside the office of Immigration Minister Ahmen Hussen, himself an African refugee, to indicate that they want the Ogunkogas to stay.

A benefit concert on their behalf will be held by the Rose City Kids charity in Welland on September 20.

Media in the Niagara region have reported sympathetically on the Ogunkoga family’s bid to stay in Ontario. In July, the Welland Tribune reported that the local community was “rallying behind” them after the Immigration and Refugee Board of Canada denied them permission to stay. The family is very well-liked in Welland. Morufat has a full-time job with a hotel in Niagara Falls and Viktor is an award-winning high school student who both volunteers and has a part-time job with a church.

The path that eventually led the family to Canada was unusual. According to the Welland Tribune, the Ogunkogas’ first port of call was the United States. In 2016, Morufat Ogunkoya got a visa for travel to the USA. After a short stay, she returned to Nigeria. Then in late 2017, her children also obtained visas to enter the USA. In January 2018, mother and children illegally crossed the Canadian border at Lacolle, Quebec, the site of most illegal entries into Canada.

The Ogunkogas lived briefly in both Toronto and Hamilton before finding a home in Welland with the help of the Welland Heritage Council and Multicultural Centre. They applied for refugee status, but their application was denied because, the Immigration and Refugee Board said, they “failed to provide any objective evidence to corroborate the father's alleged leadership role” in an Islamist group in Nigeria.

The Board has offered to help resettle the family in a Christian-majority district in the south of Nigeria, far from their native Lagos, but Wierenga told LifeSiteNews that the Ogunkoga family is frightened that Port Harcourt is not far enough from Morufat’s father and his group.

Morufat is not only a convert to Christianity, but since 2015 she and her husband, who is still in Nigeria, have been ministers in the Redeemed Christian Church of God.