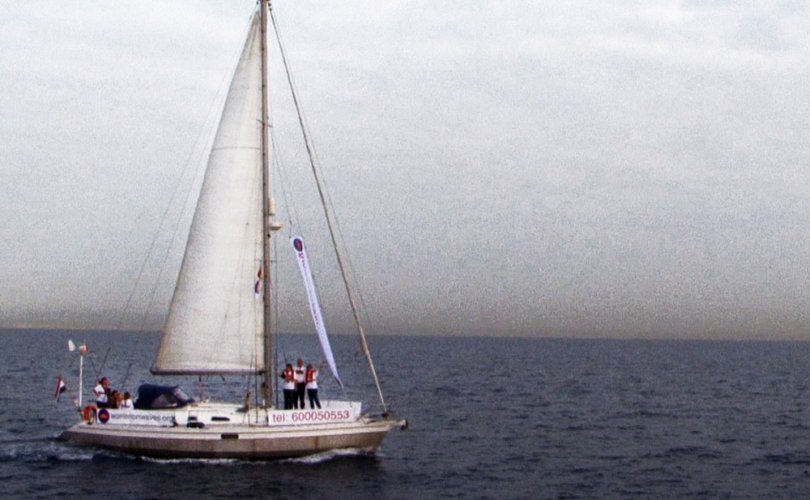 Dr. Rebecca Gomperts and her floating abortion clinic (pictured above) was the focus of the documentary "Vessel." Women on Waves

OTTAWA, November 29, 2017 (LifeSiteNews) — A Catholic university in Canada has been criticized by the Liberal government and mainstream media after it canceled screening a pro-abortion film that champions and facilitates killing pre-born children in countries where abortion is illegal.

St. Paul University in Ottawa told non-student organizers of a film festival last week that they would not be permitted to screen the pro-abortion film “Vessel” on the weekend in the school’s amphitheater.

Organizers of the “Choice” festival were told by the Catholic university to either pick a different film or find a different venue.

The Informed Choice Coalition of Ottawa organized the film festival to “present families with the range of choices available to them in the childbearing years and beyond.” The organization, according to its website, “advocates for and supports the right to bodily autonomy in all healthcare-related decisions.”

“Vessel” is a documentary about the Dutch abortion organization Women on Waves. It tracks Dr. Rebecca Gomperts’ efforts to make use of a ship to travel to countries where abortion is illegal. Gomperts then provides chemical abortions to women onboard the vessel in unregulated international waters. Thousands of pre-born children have allegedly met their doom onboard Gomperts’ floating abortion facility.

Organizers of the event decided to screen the film at the Ottawa Birth and Wellness Centre.

The Catholic Church teaches that abortion is the direct killing of an innocent human life and is always gravely immoral. Parents send their children to Catholic universities with the expectation that Catholic moral teaching will be upheld and honored.

Dr. Michel MacDonald, executive director of the Catholic Organization for Life and Family —a group co-founded by the Canadian Conference of Catholic Bishops and the Supreme Council of the Knights of Columbus — told LifeSiteNews that a Catholic university is well within its rights to stop a public screening of a pro-abortion film being organized by an outside group.

“It is within the purview of a Pontifical Catholic university to decide what films can and cannot be shown to students by an outside group,” he said.

“This decision has nothing to do with censoring free speech, but has everything to do with what St. John Paul II said about a Catholic university’s ‘responsibility … to consecrate itself without reserve to the cause of truth’ (Ex Corde Ecclesiae) which includes upholding the sanctity of life,” he added.

“They are acting on their Catholic principles and they are taking a stand for the truth of the right to life of every unborn child by saying, ‘a pro-abortion film goes against what we stand for as Catholics.’”

It remains unclear who ultimately was behind the decision to cancel the film. Wendy Jolliffe, a volunteer with the Choice film festival, told Global News that school administration gave her the impression during a conversation she had with them that university leaders did not support the move.

“From what I understood it was completely out of their hands,” she said. “It’s way up in the Catholic Church. Exactly what level it was, you’d have to check with them but I get the impression it was very high. It was not something they could control at the university.”

A Saint Paul University spokesperson said that the decision was made to cancel the film because of the university’s policy to not hold polarizing events on campus that could bring protesters, according to Global news.

Saint Paul University did not return LifeSiteNews' request for comment.

Liberal science Minister Kirsty Duncan criticized the Catholic university in sweeping terms for failing to allow the expression of a variety of views on campus.

“Our government is committed to creating open spaces for Canadians to debate and express their views,” she said in a statement to reporters when asked about the university’s decision.

“We also firmly support a women’s (sic) right to choose. In a free society, we may disagree with a person’s views, but we must defend their right to hold them-unless those views promote hate,” she added.

Duncan then challenged the Conservative party led by Andrew Scheer to criticize the university’s decision.

“We will continue to fight to ensure the Charter rights of Canadians are upheld, and I only hope the Opposition will be consistent in their support for free speech on campus and across the country,” she said.

Scheer was in the news last week after he called it “egregious” that Wilfrid Laurier University administration grilled a student and compared her actions to supporting Hitler after she showed students a clip that featured transgender critic Dr. Jordan Peterson.

Mainstream media pressured Scheer to condemn the university’s decision, pointing to his party leadership campaign pledge to withdraw federal funding from university’s that do not protect free speech.

Scheer through spokesman Jake Enwright said he “encourages all universities and colleges to promote free speech as well as the exchange of ideas and thoughts in an academic setting.”

“Conservatives recognize the rights of university administrations to decide which outside organizations are given permission to be on campus,” he said.

Scheer’s point reflects what he said in a similar case in August, where he said, “I respect the right for universities to determine which outside groups they give a platform to. And so that’s within their purview.”

MacDonald wondered why, if people are truly concerned about free speech, they are not “up in arms” about pro-life clubs being banned by the student union at the University of Ottawa.

“Banning students on campus from having a pro-life club is actually censoring free speech,” he said.

For respectful communications thanking St. Paul University for not showing the pro-abortion film: