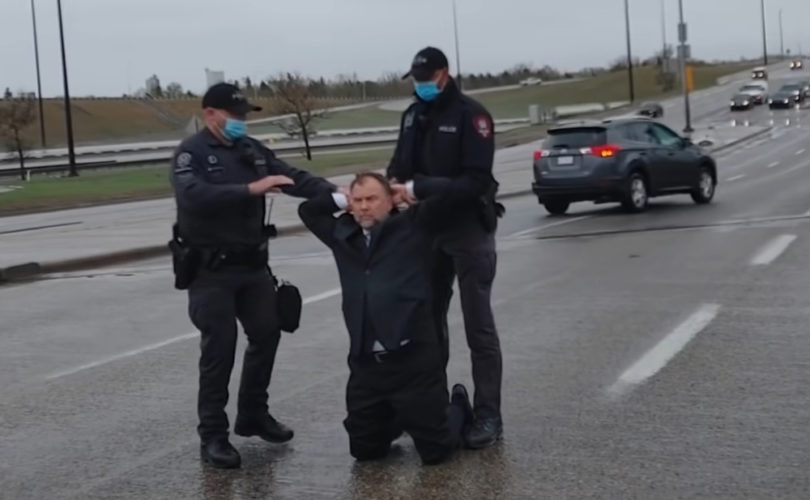 CALGARY, Alberta, July 29, 2021 (LifeSiteNews) — Canadian Pastor Artur Pawlowski, who made international headlines after being arrested in a highway takedown in May for holding worship services amid lockdowns, could be facing 21 days in jail if government health authorities get their way.

Pawlowski’s lawyers, whom he has retained with the help of Rebel News, were in court earlier this week to request an adjournment after Alberta Health Services (AHS) filed a contempt of court charge against Pawlowski and his brother Dawid.

AHS asked the court that the pair serve a 21-day jail sentence for “openly” flaunting COVID rules after holding worship services at their Cave of Adullam church located in Calgary, Alberta, in the spring of 2021.

According to a Global News report, Alberta Justice Adam Germain agreed to allow the Pawlowski’s lawyer Sarah Miller time to prepare her arguments for her clients, saying he was going “to give her every opportunity to vigorously defend her clients,” due to the nature of the charges.

According to the Global News report, Germain said that he does not want the “21-day jail sentences that you’ve (AHS) asked for” if COVID-19 is running “wild” in jails.

The judge also added that he would take into consideration arguments from Miller why the Pawlowskis’ have not had the COVID-19 jab.

“Maybe there’s an outbreak in the prison system. All of those things may influence the decision,” said Germain.

The judge agreed to an adjournment, and the court will readjourn in September for the Pawlowski brothers.

In June, Germain ruled that AHS had proven that the brothers were guilty “beyond a reasonable doubt of contempt” of court. This came after the brothers earlier breached an injunction order against them which said they would go to jail if they held church services.

Pawlowski and his brother Dawid Pawlowski were arrested by members of the Calgary Police Service (CPS) in May in a high profile, dangerous highway takedown, and charged with “organizing an illegal in-person gathering.”

At the time of their arrests, Alberta had severely limited church service attendance size.

The possible jail sentence for the brothers comes despite the fact Alberta has been fully open since July 1, with virtually no COVID health restrictions in place since then.

Pawlowski had earlier made headlines for calling police and health inspectors coming to his church on two unannounced health visits “Gestapo Nazis.”

Section 176 of the Criminal Code of Canada makes it a crime to interrupt a church service, and also to arrest an “an officiant” when they are returning home from service.

Pawlowski is currently traveling through America on his Courageous Faith tour, telling the crowds about his ordeals with police and health officials who targeted him for not following local COVID rules.

His legal team recently provided a breakdown of his case in an interview with Rebel News founder Ezra Levant.