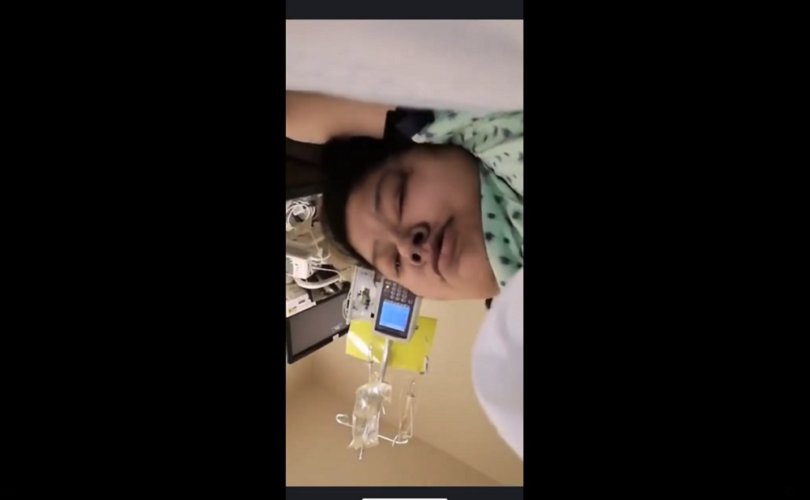 MONTREAL, Quebec, October 2, 2020 (LifeSiteNews) — The death of a 37-year-old indigenous woman and mother of seven in a Quebec hospital where staff mocked her with what many say were racially motivated insults has sparked public outrage over systemic racism in Canada and calls for a criminal investigation.

Joyce Echaquan of the Atikamekw community of Manawan live-streamed on Facebook a September 28 video that records her panting, groaning, and screaming while a nurse and an orderly can be heard speaking to her in French, reported the Toronto Globe and Mail.

One calls her “stupid as hell,” and another says: “She’s good at screwing, more than anything else. And we’re paying for this,” it reported.

“You made some bad choices, my dear,” the first employee is heard saying in the seven-minute video, which was published by Journal Métro and circulated widely on the internet. “What are your children going to think, seeing you like this, eh?”

On Tuesday, Quebec premier François Legault announced that one of the nurses who treated Echaquan had been fired. Quebec’s coroner’s office said it will investigate her death, and the local health board, CISSS de Lanaudièr, is launching an internal probe into the tragedy, the Globe reported.

On Thursday, CISSS confirmed that an orderly from the hospital had also been fired, CTV News reported.

Echaquan went to Joliette Hospital on Saturday complaining of stomach pains and on Monday was allegedly given morphine, even though she allegedly told staff she had a heart condition and a pacemaker and could not handle the drug, her cousin Mirella Dubé told the Globe.

Her husband, Carol Dubé, told CBC that it was clear that the hospital staff were humiliating his wife.

She went into the hospital Saturday and “two days later, she died,” said a shaken Dubé. “I have seven children who find themselves without a mother,” he added.

Legault said Tuesday that the nurse’s conduct was “unacceptable,” but he did not characterize the tragedy as an example of systemic racism in the province.

“I really don’t think we have this kind of way of dealing with First Nations people in our hospitals in Quebec. Yes there is some racism in Quebec. We’re working on that,” said Legault, referring to a committee on anti-racism he set up in the summer, according to CBC.

Echaquan’s death comes a year after the release of the Viens summary of a public inquiry that concluded it was “impossible to deny” that indigenous people in Quebec face “systemic discrimination” when accessing public services.

The Council of the Atikamekw Nation said such discrimination remains pervasive and that Echaquan’s video “reveals disturbing condescension and racist remarks” from staff, Canadian press reported.

“It is unfortunate that in 2020 such behaviours can still occur,” Grand Chief Constant Awashish said in a statement. “It is everyone’s responsibility to denounce them, especially in the context of health services and whose ethics should protect us from the discomfort of racism.”

Federal Indigenous Services Minister Marc Miller said in response to Echaquan’s death that it is “not an isolated incident” and that he welcomed the decision for an inquest. Prime Minister Justin Trudeau called for “a rapid investigation to establish if it was more than just simple racist words,” according to the Toronto Star.

Police need to investigate whether the actions of the nurse and orderly were criminally negligent and motivated by hate, legal experts told CBC.

The possibility of criminal negligence is based on Echaquan’s alleged complaints that she was being over-medicated and her family’s assertions that she was allergic to morphine and had heart problems, said Amir Attaran, a lawyer and University of Ottawa law professor.

Moreover, the remarks of the hospital staff are clearly racist and open the possibility of Echaquan’s death being a hate crime, he said.

Quebec’s provincial police, the Sûreté du Québec, told CBC it hasn’t yet opened a criminal investigation but is working with the coroner’s office, and the results of the autopsy will be a factor in its decision, CBC reported.

“This tragic case that has come to national attention today … reminds us that this is a national issue,” said Turpel-Lafond, head of an independent investigation into allegations of racism in B.C.'s health care system.

“It is shocking because of the recording and the distress and so it is a deeply troubling example of not just a lack of care, but some deeply racist views that caused someone to be treated as less than human.”

A GoFundMe campaign to raise money for Echaquan’s family had reached almost $229,000 by Friday afternoon.