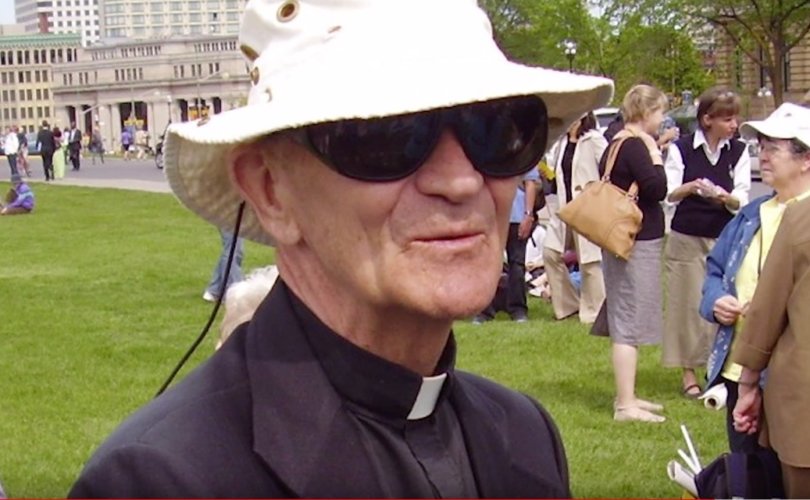 OTTAWA, July 11, 2018 (LifeSiteNews) — A Canadian Jesuit who has fasted and prayed on Parliament Hill for nearly 30 years to end abortion has blasted his order for being silent on “the worldwide genocide of the preborn” for the same length of time.

Fr. Tony Van Hee, who will be 83 in September, also issued a heartfelt plea in a February letter to Jesuit superior general Fr. Arturo Sosa Abascal that the Jesuits make ending abortion a top priority.

It was his personal response to Abascal’s request for proposals by January 2019 for new “universal apostolic preferences” to direct Jesuit missionary efforts worldwide for the next decade.

“Is there a need of the universal Church more pressing than ending the greatest destroyer of peace in the world today, and in my and others’ opinion, the single greatest evil in all human history, apart from the death of Christ?” wrote Van Hee.

“Not once — and I stand to be corrected on this — not once did either of them ever mention abortion by written or spoken word to the whole Society,” Van Hee wrote.

The Society of Jesus has been regarded as an elite force in the Church since Basque soldier St. Ignatius of Loyola founded it in France in 1534 in the shattering aftermath of the Protestant Reformation.

Jesuits undergo an intellectually rigorous formation that is the longest of any religious order, and take a special vow of obedience to the Holy Father for direction in their work, which is mainly in education.

They also seem to have a penchant for arousing enmity against them.

The Society’s explosive growth, and apparent power and influence in New World colonies — including rumours it had there amassed piles of gold — aroused such envy, fear and suspicion in the courts of Spain, France, Portugal and Austria that Jesuits were persecuted and expelled from those countries in the 18th century.

Pope Clement XIV bowed to the will of the monarchs by issuing a bull in 1773 declaring the “name of the company shall be forever extinguished and suppressed” — an edict ignored by Cathering the Great in Russia allowing the Jesuits to survive until Pope Pius VII restored the order in 1814.

Following Vatican II, the Society of Jesus — with some significant exceptions — became synonymous with liberal views within the Church.

Moreover, its membership declined sharply, falling from 36,038 in 1965 to about half that in 2011, according to data from the Center for Applied Research in the Apostolate at Georgetown University. The total membership in 2016 was 16,378.

Still and all, the Society of Jesus remains the single largest religious congregation of priests and brothers in the Catholic Church, working in 122 countries on six continents, and arguably retains much of its almost uncanny mystique and prestige, as well as an ability to provoke censure, justified or not.

Notably, Pope Francis is a Jesuit, and the order’s superior general is traditionally dubbed the “Black Pope” because of his sway in the Church.

Moreover, the influential Rome-based Jesuit magazine La Civiltà Cattolica, reviewed by the Vatican’s secretary of state before publication, is seen as reflecting the official views of the Holy See, and current editor is papal confidante and “mouthpiece,” Jesuit Antonio Spadaro.

Have Jesuits succumbed to “human respect”?

Van Hee has received no answer from Abascal, nor, at this point, does he expect one, he told LifeSiteNews.

A Venezuelan, Abascal stirred controversy since his 2017 election by opining Satan is a “symbolic figure” who doesn’t really exist, and Jesus’ words against divorce are “relative” and to be interpreted according to individual conscience.

As for Van Hee, he was arrested three times in the late 80s with Operation Rescue, a non-violent intervention to save mothers and children from the violence of abortion, the Catholic Register reported recently.

Since 1989, he has endured cold, wrath, vandalism, and more recently, pettifogging rules as he witnesses on Parliament Hill to Canada’s abortion victims when the House of Commons is sitting.

Van Hee fears the Jesuits have succumbed to the “sin of human respect.”

He pointed to a warning by Dr. Jeff Mirus in Catholic Culture against the temptation to be “respecters of persons” and influenced by “the prejudices of the dominant culture.”

Indeed, the “Modernist makes God Himself a victim of human culture,” Mirus writes, “denying even to Him the ability to transcend what those He has created have wrought.”

Despite this, Van Hee pleaded with Abascal in his letter to emulate the Society’s superiors who rallied Jesuits to enter Elizabethan England to minister to recusant Catholics, knowing their capture would mean a gruesome death.

He quoted former Anglican deacon St. Edmund Campion, who before he was captured, imprisoned in the Tower of London, racked at least twice before being hanged, drawn and quartered at Tyburn, penned his apologia — disparagingly referred to as “Campion’s Brag”:

…be it known to you that we have made a league — all the Jesuits in the world, whose succession and multitude must overreach all the practice of England — cheerfully to carry the cross you shall lay upon us, and never to despair your recovery, while we have a man left to enjoy your Tyburn, or be racked with your torments, or consumed with your prisons.

At the voice of our General, which is to me a warrant from heaven and oracle of Christ, I took my voyage from Prague to Rome…and from Rome to England, as I might and would have done joyously into any part of Christendom or heathenness, had I been thereto assigned.

“It seems to me that’s the way we should have handled” abortion, Van Hee said. “We should have been that concerned about it,” and had “that confidence, that with God’s help,” the Jesuits could play a major role in stopping the “worldwide genocide of the preborn.”

May the Peace of Christ be with you always!

Under the title, “Reconciliation, Justice, and Peace”, on page 2, the letter says, “In order to enter into this discernment of preferences with great spirit and generosity, we will lay out the framework within which we propose to work.”

It was not clear to me exactly what that framework was so I chose three short statements which seemed to be prominent, namely, “Reconciliation is today the most heartrending cry of humanity”, secondly, “Our Faith proclaims that Reconciliation and Justice lead to Peace” p 2), and thirdly, “Peace is the defining gift of God” (p 3).

Ending abortion would then be part of Justice and part of Peace. Justice for the Unborn would be to give them their fundamental right, the right to life.

And according to St Teresa of Calcutta: “I have said often, and I am sure of it, that the greatest destroyer of peace in the world today is abortion. If a mother can kill her own child, what is there to stop you and me from killing each other?” (Cairo International Conference on Population and Development, September 9, 1994).

So I place the mission of ending abortion under the overall framework of “Reconciliation, Justice, and Peace”, taking to heart the following words of the letter, especially in the light of the harsh criticism I am about to make of the Society’s present discernment process:

“Justice is possible when human beings are made just by God’s action. Justice becomes reality when human beings, responding to the action of the Holy Spirit, follow the path of reconciliation by a conversion of heart that leads us to recognize our errors and ask for and receive forgiveness for them” (p 3).

In support of my recommendation to make ending abortion a new universal apostolic preference, I ask:

“Is there not something dreadfully, dreadfully, dreadfully wrong with a discernment process that has not said a word about abortion for at least the past 34 years, that is, since September 13, 1983, in the face of almost universal acceptance and promotion of abortion by those in power in the Western World; in the United Kingdom since October 27, 1967, in Canada since May 14, 1969, in the U.S. since January 22, 1973?”

“Father General … will discern the greater needs of the universal Church and will establish global and regional priorities”.

Is there a need of the universal Church more pressing than ending the greatest destroyer of peace in the world today, and in my and others’ opinion, the single greatest evil in all of human history, apart from the death of Christ?

Please, Father General, rally the members of the Society as did Fathers General Everard Mercurian and Claudius Aquaviva in regard to a much lesser evil, the Faith in Elizabethan England, which led to Campion’s Brag:

“And touching our Society, be it known to you that we have made a league—all the Jesuits in the world, whose succession and multitude must overreach all the practice of England—cheerfully to carry the cross you shall lay upon us, and never to despair your recovery, while we have a man left to enjoy your Tyburn, or to be racked with your torments, or consumed with your prisons. The expense is reckoned, the enterprise is begun; it is of God; it cannot be withstood. So the faith was planted: So it must be restored.”

“At the voice of our General”, Campion says, “which is to me a warrant from heaven and oracle of Christ, I took my voyage from Prague to Rome (where our General Father is always resident) and from Rome to England, as I might and would have done joyously into any part of Christendom or Heatheness, had I been thereto assigned.”

With all due respect, and with much gratitude for the Society of Jesus, and with prayers and God’s Blessing+,

Jesuit chief claims Satan is only a ‘symbol’ created by man

Jesuit chief must be ‘corrected’ for casting doubt on Jesus’ words against divorce: Cardinal Burke