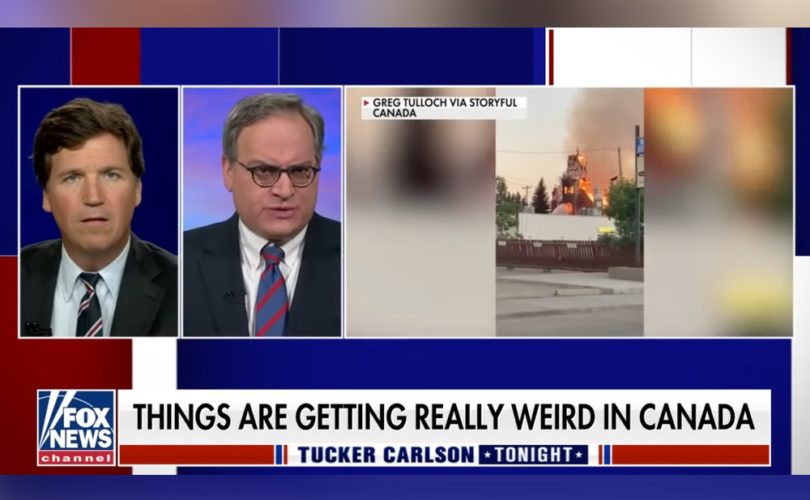 CANADA, July 15, 2021 (LifeSiteNews) – The head of Rebel News, Ezra Levant, told FOX News host Tucker Carlson that the multitude of arson attacks on churches in Canada are the nation’s “Black Lives Matter” moment, and called out the near silence regarding the burnings from the nation’s top leaders.

“It's the Canadian equivalent of when Black Lives Matter burns down black owned businesses in black neighborhoods – that does not help black people,” Levant told Carlson last week.

There has been heavy media coverage of the discovery of unmarked graves at now-closed residential schools once run by the Church in parts of Canada and now nearly 40 churches, most of them Catholic, have either been burned or vandalized.

An online map posted by True North News shows the locations of these churches.

“All of a sudden Canada looks a lot like the Soviet Union,” Carlson began.

Levant told Carlson that most of the churches being burned are “Aboriginal-focused.”

“And you often have, in one case, white Antifa-style vandals…filming themselves desecrating a church. And the trouble is from the very top, it's either silence or tacit support,” said Levant.

Levant added he is “reluctant to use the word Kristallnacht because we're not there yet,” in regard to the church burnings in Canada.

“It was a precursor to the Holocaust. Obviously, we are not that far gone yet, but what do you call it when literally dozens of churches are being systematically vandalized, torched?”

Kristallnacht was the burning of Jewish synagogues, homes, businesses, schools, and hospitals at the hands of the Nazis in Germany in 1938, which resulted in many deaths and thousands of Jewish people taken to concentration camps; ultimately six million Jews died in the Holocaust.

Canada’s Prime Minister Justin Trudeau waited weeks before acknowledging the church vandalism, and when he did speak, he said it is “understandable” that churches have been burned, also saying it is “unacceptable and wrong.”

In early July, Gerald Butts, a former adviser and close friend to Trudeau was called out for saying the recent rash of arson and vandalism attacks on mostly Catholic churches are “understandable.”

Carlson called out both Butts as well as Harsha Walia, executive director of the British Columbia (B.C.) Civil Liberties Association (BCCLA). Walia recently sparked online fury after openly calling for violence against Catholic parishes, writing on Twitter, “Burn it all down.”

Said Carlson of Walia, “the head of the B.C. Civil Rights Commission says burn it all down. I mean, that person sounds like a dangerous lunatic. Is that who is that? What is going on?”

Levant responded to Carlson by noting that Walia “hasn't been sacked” yet because of her comments, noting that a lot the churches being burned have been ones with Aboriginal Indigenous congregants, who have asked for their churches to not be burned down.

Catholic author Michael O’Brien who attended residential schools and gave testimony to the Truth and Reconciliation Commission, previously told LifeSiteNews that the chief underlying issue in the residential school saga was the institutional abuse of children by removing them from their families by the state authorities, and then taken to the schools, noting the “long-term psychological and social effects of this.”

Canadian lawyer calls for churches to ‘burn,’ says she will help defend ‘anyone’ charged with arson