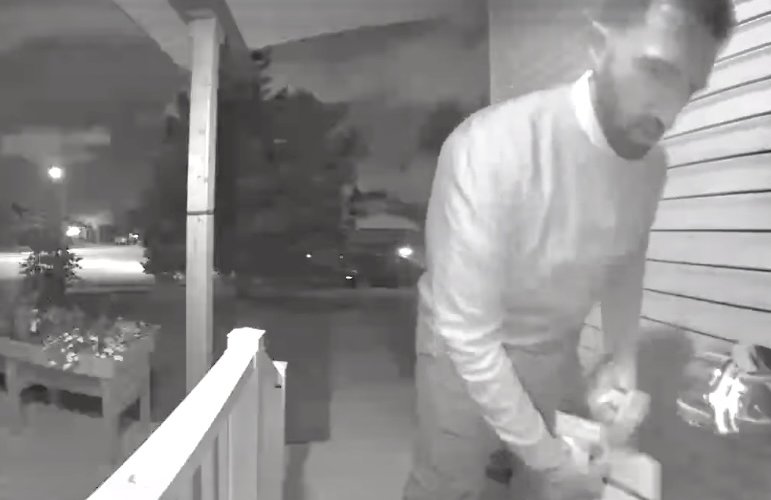 Liberal Calgary-Skyview candidate George Chahal appears to remove incumbent Jag Sahota’s flyer and leave his own on a home's step.Facebook

CALGARY, Alberta (LifeSiteNews) – A newly elected Canadian Liberal Party MP caught red-handed in September pilfering his conservative opponent’s flyers from someone’s porch during the fall election campaign might only get a slap on the wrist for his unethical actions.

According to a Western Standard report, Liberal MP George Chahal  for Calgary-Skyview may only face a $5,000 fine or a possible jail term of up to six months for his misdeeds.

Chahal is currently under investigation by the Commissioner of Elections Canada after a video showed him swapping out flyers from his main competitor, Conservative Party of Canada (CPC) Jag Sahota, with his own at a person’s house just before Canada’s September 20 federal election.

In the video, Chahal’s face is clearly visible. It appears he made no effort to disguise his actions as he was wearing a sweater with his name on the back with the number 21 and “Vote George” text on the front.

Brassard confirmed last week that the Commissioner of Elections Canada is “continuing” the investigation into Chahal.

During a question period last week, Brassard directly asked Canada’s Prime Minister Justin Trudeau if even with “the low bar on ethics and conduct set by the Liberals and indeed the prime minister over the last six years,” if he thought Chahal’s actions are the norm for his MPs.

“Does the prime minister think this type of action from a member of his caucus is acceptable,” Brassard said.

Trudeau replied to only say that Chahal is “fully cooperating with Elections Canada as it goes through its processes.”

In an interview on CBC’s Calgary Eyeopener last Friday, Chahal claimed he was “fully” cooperating with an Elections Canada investigation.

“I’ve acknowledged what I did, and it was a mistake,” Chahal said.

Chahal admitted to Eyeopeners’ David Gray that the commissioner’s election office did conduct a “review of this matter,” and that they are still going through the “process.”

The porch event involving Chahal was made public in September after Facebook user  Glenn  Pennett posted a doorbell camera video showing the incident, which is said to have taken place on September 19.

The video appears to show Chahal leaving his own flyer on Pennett’s step after taking away Sahota’s.

Calgary Police Service (CPS) investigated the incident after receiving a complaint and then referred the investigation to Elections Canada.

Chahal beat out the incumbent Sahota by fewer than 3,000 votes in the hotly contested riding.

According to a Sun-News report, Chahal campaign manager Randall Zalazar admitted that it was Chahal in the video, but that he took the flyer due to it having “incorrect polling information.”

According to Pennett, however, the flyer swapped in by Chahal gave the wrong information on where to vote.

Since becoming Prime Minister in 2015, Trudeau and his Liberal party have been caught in scandal after scandal, such as the WE Charity corruption scandal, the SNC-Lavalin affair, and the sacking of high profile female MPs.

Trudeau has also been heavy-handed when it comes to COVID rules, such as banning democratically elected MPs and staff who have not had COVID jabs from accessing the nation’s center of democracy, the House of Commons.

The house resumed sitting on November 22, with all MPs gathering in attendance in person.

The September 20 federal election saw Trudeau re-elected with a minority government. The Conservative Party of Canada (CPC) under Erin O’Toole won only 119 seats, two less than in 2019.