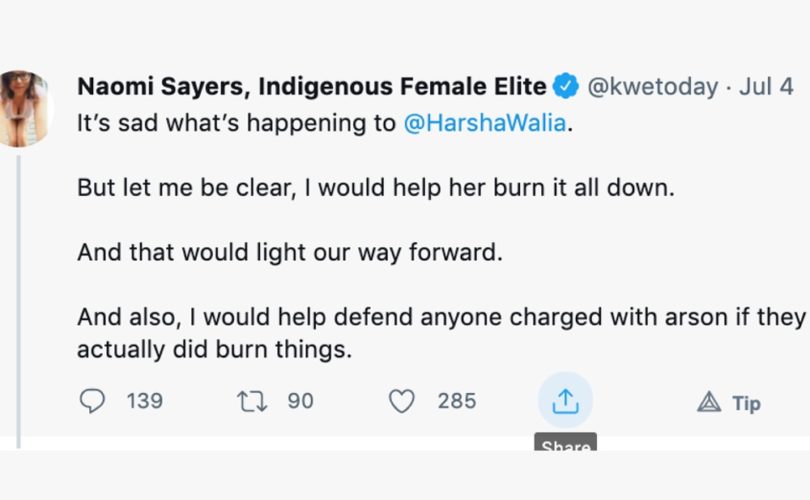 ONTARIO, July 8, 2021 (LifeSiteNews) – A Canadian lawyer has publicly said that she would help “burn” down Catholic churches, as well as offering to help defend anyone caught attempting arson.

“It’s sad what’s happening to @HarshaWalia. But let me be clear, I would help her burn it all down.,” tweeted Naomi Sayers, who is an Indigenous lawyer based out of Sault Ste. Marie, Ontario, and licensed to practice law in Alberta and Ontario.

“And that would light our way forward. And also, I would help defend anyone charged with arson if they actually did burn things.”

Sayers remarks were made on Sunday in support of a social media post by Harsha Walia, executive director of the British Columbia (B.C.) Civil Liberties Association (BCCLA).

Walia’s Twitter post openly called for violence against Catholic parishes, saying to “Burn it all down,” after the discovery of unmarked graves at now-closed indigenous residential schools once run by the Church.

Sayers webpage states that she has “a broad public law practice with a focus on indigenous law, administrative law (regulatory law), environmental, energy and mining law, criminal law and corporate law,” and that she offers “direct and candid legal services to everyday individuals, professionals, governments and other entities.”

Twitter user Dean Skoreyko blasted Sayers remarks, and said that he had filed a complaint with both the Alberta and Ontario law societies, before confirming later The Alberta Law Society  had responded to his complaint.

Sayers responded to Skoreyko’s tweets by posting detailed information on how one can contact both law societies in order to file a complaint about her posts.

In another tweet, Sayers alleged that her earlier messages were not to be taken literally.

“Ps. Burn it all down. Doesn’t literally mean, burn it down. But just in case, I can also defend, both civil and criminal,” she wrote.

“Totally wrong and no way to reconciliation at all […] Have you listened to the Elders saying no to violence or you pick and choose […] I truly hope this was in sarcasm,” tweeted Bar.

LifeSiteNews contacted both the Alberta and Ontario law societies to ask if they would be providing comment regarding Sayers remarks.

Jennifer Wing, Senior Communications Advisor for the Law Society of Ontario replied to LifeSiteNews, saying that any information concerning specific complaints made to them as well as any investigations are confidential, “until or unless they result in regulatory proceedings, which would be public.”

Wing added that if one wants to make a complaint against a lawyer, they are to do so via the official complaints process, the contact information of which is listed at the end of this report.

Colleen Brown, Manager of Communications for the Law Society of Alberta, responded to LifeSiteNews saying that when a complaint about a lawyer is brought forth to the society, “we assess each matter according to a process that is fair and consistent for both the lawyer involved and those providing the information.”

Brown also noted that complaints against lawyers are confidential and that any comments about a complaint are “guided by the Legal Profession Act.”

As for Walia’s comments, according to a Global News report, she claimed on Twitter that it was “totally ridiculous to suggest I am actively calling for arson,” before adding that “yes, I do think deadly genocidal colonialism locally and globally needs to collapse.”

Not only has the federal Senate in Canada not come to the aid of vulnerable people threatened by the passage of Euthanasia Bill C-7, they have actually voted to make matters worse by EXPANDING provision of euthanasia beyond what C-7 had originally intended.

The bill will now go back to Parliament, where the Senate's amendments can be accepted or rejected.

Please READ LifeSiteNews' analysis of the Trudeau Liberals' latest salvo in their all-out push to expand euthanasia in Canada: https://www.lifesitenews.com/news/canada-senate-passes-euthanasia-bill-expanding-categories-of-the-killable

Bill C-7 would expand already existing provisions for assisted suicide. It would "repeal the provision that requires a person’s natural death be reasonably foreseeable."

The Bill is currently in its Third Reading in the House of Commons and will move on to the Senate if it passes.

We are obliged to help people who are suffering, especially the vulnerable, and that’s why we must oppose Bill C-7.

We are obliged to help people who are suffering, not kill them.

And, right now, the Trudeau Liberals are pushing for making death even more accessible to our most vulnerable citizens by tabling Bill C-7 in Parliament.

Please SIGN this petition and call for Canada's Members of Parliament to REJECT more euthanasia in Bill C-7, and, instead, provide for more homecare, palliative care, and mental health support.

Bill C-7 would expand existing provisions for assisted-suicide by removing the requirement that a person's natural death be reasonably foreseeable to qualify for MAiD.

Simply put: under C-7, people who are not terminally ill can be killed by MAiD!

This is outrageous, as it puts people with disabilities, the elderly, the young, and those who cannot consent (if they had already agreed to MAiD) at serious risk.

Please CLICK HERE to learn more about Bill C-7 and how it would put those vulnerable people more at risk, and allow for more death and more killing.

Our elected Members of Parliament should be discussing how to help our disabled, elderly and young people with greater provision for homecare, palliative care, and mental health support, rather than encouraging our most vulnerable to kill themselves with our government's help and endorsement.

Nothing could be more foul and malicious.

And, while it's true that Trudeau's Minister of Justice is sponsoring this atrocious Bill, 40 Conservative Party politicians supported him in the vote on the Bill's Second Reading in late October.

We list these 40 Conservative MPs below, so that, after signing this petition, you can politely and respectfully contact them to let them know you want them to REJECT the expansion of MAiD (which, again, will mean more death and more killing), and to EMBRACE life-affirming provisions, like more funding for homecare, palliative care, and mental health support for our most vulnerable citizens.

List of 40 Conservatives who voted FOR C-7 (Expansion of Euthanasia) on the Bill's Second Reading:

Intense media coverage of the unmarked graves at the now-closed Kamloops Indian Residential School located in British Columbia has resulted in over 23 churches, most of them Catholic, having been either burned or vandalized.

A priest who spoke to LifeSiteNews under condition of anonymity after the first two churches on indigenous land in British Columbia were set ablaze, said that First Nations Catholics will suffer the loss of their churches, but that sadly we can “expect more” burnings to come.

The priest also called out why acts of vandalism against Catholic churches are not called out as hate crimes.

“Why it is when two Catholic churches are torched (as they just were), and it hits the news, the words are ‘police are investigating the cause…’ but [when] a mosque or synagogue is burned, it’s a hate crime?” he asked, before offering an answer, “it’s because there’s an unspoken prejudice that it’s okay that Catholics suffer.”

A report from the early 1900s by a medical inspector ]showed high rates of tuberculosis among Indigenous children as well as a lack of proper funding from the government.

In a recent report published by LifeSiteNews, well-known Canadian Catholic author Michael O’Brien, who himself attended a residential school for three years, cautioned against using the discovery of the graves as a reason to attack the Catholic Church.

O’Brien, who has gave testimony to the Truth and Reconciliation Commission, told LifeSiteNews that the chief underlying issue in the residential school saga was the institutional abuse of children being removed from their families by the state authorities, and then taken to the schools, noting the “long-term psychological and social effects of this.”

Another report published by LifeSiteNews highlights how Cree playwright Tomson Highway, as well as the late Inuvik Dene band chief Cece Hodgson-McCauley, said that attending the schools set them up for success later in their adult life.

“All we hear is the negative stuff; nobody’s interested in the positive, the joy in that school,” Highway said to journalist Joshua Ostroff about the Guy Hill Residential School he attended, which was run by the Missionary Oblates of Mary Immaculate.

As for Trudeau, he has blasted the Catholic Church publicly, saying, “Make it clear that we expect the Church to step up and take responsibility for its role in this and be there to help in the grieving and the healing, including with records, as necessary. It’s something we are all still waiting for the Catholic Church to do.”

However, the Catholic Church in Canada as well as in Rome has already acknowledged that some Catholics were at fault in the government-mandated residential school system.

In April 2009, Pope Benedict XVI met with First Nations representatives and apologized for the abuse children suffered in the schools.

Phil Fontaine, then-national chief of the Assembly of First Nations, emerged from the meeting satisfied, saying, “What we wanted the Pope to say to us was that he was sorry and … that he deeply felt for us.

To launch a complaint against a lawyer with the Law Society of Alberta visit the link:

To launch a complaint against a lawyer with the Law Society of Ontario visit the link: