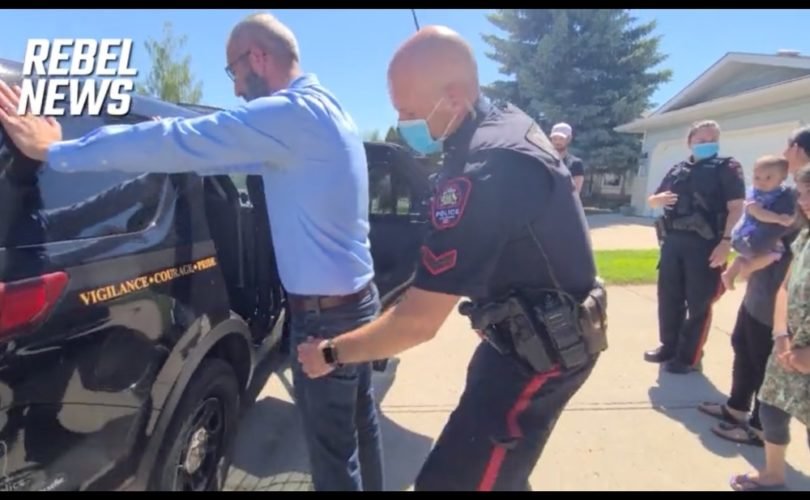 CALGARY, Alberta, June 18, 2021 (LifeSiteNews) – A Canadian lawyer says that health officials “abused” their authority by arresting Christian pastor Tim Stephens, and that a judge’s order used to detain Stephens “does not apply” in his situation.

“It is our position that Alberta Health Services (AHS) is engaged in an intentional act of public deception and abuse of authority in arresting Pastor Stephens and others,”  Jay Cameron, Litigation Director for Justice Centre for Constitutional Freedoms (JCCF ), said in a press release sent out on Tuesday.

“Further, it appears that Premier Kenney’s government is targeting its enemies, those who are speaking out against lockdown restrictions and for Charter freedoms,” Cameron continued.

Stephens is being represented by the legal team at the JCCF. Cameron said that the AHS used a May 13 order from Alberta Associate Chief Justice Rooke to justify the arrest of Stephens, but that it does not “apply to the public broadly.”

The May 13 order was originally issued in relation to a planned protest at an Alberta restaurant, The Whistle Stop Café.

As a result of the planned protest, AHS obtained a court injunction against all “organizers of advertised illegal gatherings and rallies breaching COVID-19 public health orders.”

The café was shuttered by AHS for staying open contrary to COVID-19 health rules. The café’s owner was also arrested then released earlier in the year under the order for defying COVID-19 rules for keeping his restaurant open despite a ban on indoor dining.

The May 13 order, according to Cameron, also “does not apply to Pastor Stephens” and “applies only” to the owners of the Whistle Stop Café.

On Monday, Stephens was arrested and charged a second time by members of the Calgary Police Service (CPS) for allegedly breaking COVID-19 health rules.

He will remain behind bars at the Calgary Remand Centre until his next court appearance which is scheduled for June 28.

A video of his arrest, posted by Rebel News, shows Stephens’ children crying while saying “goodbye daddy,” as he was placed inside a police car.

The new charges follow a service Stephens held on June 6, according to police shown in the video. Stephens had his church doors shut by police on June 5, but continued conducting services nonetheless.

Stephens’ first arrest on May 16 also occurred in front of his family, after he held an indoor church service that contravened the provincial government’s COVID rules.

He was released after a judge agreed to let him out of jail on the condition that he abide by a now-amended May 6 injunction order issued by Alberta Health Services (AHS).

The JCCF says that Stephens’ arrests and charges are “unlawful”  and that they “breached several of his Charter rights.”

Stephens’ second arrest comes at a time when politicians in Alberta have been publicly scrutinized after being allegedly caught breaking the provinces COVID-19 rules.

Kenney and eight others, including Health Minister Tyler Shandro, House Leader and Environment Minister Jason Nixon, and Finance Minister Travis Toews, were photographed dining on the rooftop of a government building on June 2. The photos appear to show that the government officials were violating the current COVID-19 guidelines.

A  “Fact Check”  report from the Western Standard  found that Kenney and the other attendees of the rooftop dinner potentially violated 18 of their “own regulations, and eight counts of violating their own guidelines.”

Kenney publicly apologized for the rooftop dinner after internal party outrage spilled over into the public sphere.  From April 9 until June 9, all indoor dining in Alberta was banned. Restaurants were also closed from early December of 2020 to February 8.

Cameron said that Stephens’ second arrest comes at a time when the “Premier wines and dines his ministers at the Sky Palace with impunity,” but does not allow for church congregants to “peacefully gather to pray together and worship on their own property.”

“In two weeks, literally tens of thousands of people will gather in Calgary for a massive rodeo party, but Tim Stephens cannot lead his congregation in worship because Premier Kenney believes this to be too dangerous,” said Cameron.

Recently, Alberta entered stage 2 of its COVID-19 reopening plan, allowing restaurants and bars to provide indoor, seated service for a maximum of 6 people per table from the same household.  As part of stage two, churches are allowed to operate at one third capacity, however masks and physical distancing rules remain in place.

Kenney is the only Canadian premier to have jailed Christian pastors for breaking  COVID rules,  having also jailed Paster James Coates and Pastor Artur Pawlowski.

Recently, the JCCF released a powerful video titled “The Government War on Worship” that blasts Kenney for allowing Christian pastors to be jailed.