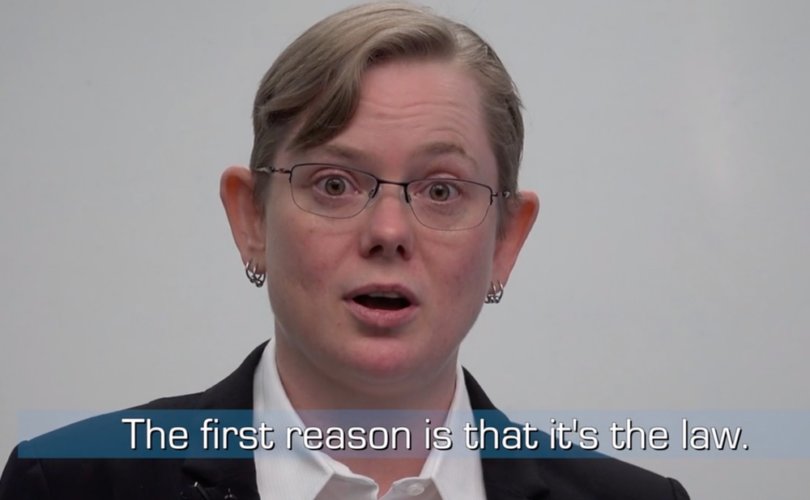 VANCOUVER, British Columbia, December 23, 2019 (LifeSiteNews) — A pro-family group in British Columbia has launched a legal complaint against a pro-LGBT lawyer for claiming that “it’s the law” that people must use the “preferred pronouns” of males who now say they’re “female” and vice versa.

Vancouver lawyer Adrienne Smith “deceives people into thinking the law compels everyone to use the preferred pronouns of trans-identified individuals,” asserts Kari Simpson, executive director of pro-family advocacy group Culture Guard, which filed the complaint with the Law Society of British Columbia earlier this month.

Smith, a biological woman who identifies as “non-binary,” appears in a three-minute 2017 video published in connection with the Canadian Union of Public Employees (CUPE) titled “Why Use Appropriate Pronouns for Transgender People?”

She identifies herself as a lawyer and CUPE member and claims the most important reason to use “appropriate” pronouns is because “it’s the law.”

Why Use Appropriate Pronouns for Transgender People from working TV on Vimeo.

But that statement “promulgates a lie that infringes Canadians’ Charter-protected right to freedom of expression,” said Simpson in a press release.

Contrary to what Smith says “no such law exists, either in BC or Canadian statute law,” said Simpson.

Canadians might think they have to refer to a “gender fluid person” by their “preferred pronouns” because of confusion over federal Bill C-16, Simpson told LifeSiteNews.

But Simpson says Bill C-16 does not mandate the use of “preferred pronouns”.

“Definitely, my complaint to the Law Society is about putting that gauntlet down, because there is so much confusion at this point,” she told LifeSiteNews.

Bill C-16 “gave the right to people to express themselves or to identify a certain way. What it doesn’t do is require me to change how I’m going to do things,” Simpson said.

“The law on the use of pronouns would appear to be unsettled. Consequently, there is not at this time, a legal requirement that designated pronouns be used,” she told LifeSiteNews in an email.

Moreover, provincial rulings on transgender cases so far have not settled the issue, she added.

When the BC Human Rights Tribunal ruled in March 2019 that Bill Whatcott violated trans-activist Ronan “Morgane” Oger’s human rights, “the issue was whether the flier distributed by Mr. Whatcott exposed Oger to hatred and contempt,” Landolt explained.

“The tribunal agreed that it did so. However, it did not make any ruling on Mr. Whatcott’s use of the male term rather than female term when he referred to complainant Oger,” she said.

The panel “directed” Whatcott to “use ‘she’ rather than ‘he’ when referring to Oger,” and Whatcott’s consistent refusal to do so “contributed to the extraordinarily high penalty” against him, but “was not part of the panel’s judgement on the use of designated pronouns,” Landolt said.

The tribunal ordered Whatcott to pay Oger $55,000  — $35,000 in compensation for injury to Oger’s “dignity, feelings and self-respect,” and $20,000 for Whatcott’s “improper” conduct during and before the hearings.

Ontario’s Bill 89, which was enacted to amend and repeal the Ontario Family Services Act in 2017, “did not make any reference to the requirement that preferred pronouns be used,” Landolt told LifeSiteNews.

Nor does the BC Child, Family, and Community Service Act “make any reference to preferred pronouns, but Section 37 refers to what constitutes the ‘best interests of a child’ and Section 38 lists what constitutes ‘family violence’,” she said.

BC judges used that section to rule earlier this year against the father who was fighting to stop his 14-year-old daughter receiving testosterone shots in her transition to a “boy”.

On April 15, 2019, BC Supreme Court Justice Francesca Marzari upheld an earlier ruling in her A.B. vs. C.D. decision that the father’s refusal “to accept the child’s gender change” — including refusing to use her “preferred pronouns” — was “contrary to the child’s ‘best interest’ and constituted an ‘act of violence,” Landolt said.

Marzari’s ruling is under appeal and so is not binding, “at least until the B.C. Court of Appeal hands down its decision,” she said.

The appeals court ruling “may also be subsequently appealed before the Supreme Court of Canada, where it would then become settled law and become binding,” she said.

But until then, the law on pronoun use “would appear to be unsettled,” Landolt said.

Simpson’s complaint to the law society alleges that Smith violated BC’s Legal Professions Act, which requires lawyers to “uphold the rights of all persons,” as well as the law society’s rule that lawyers not allow outside interests to “jeopardize” their “professional integrity, independence or competence.”

And “demanding that her audience conform to a nonexistent law” does “more than jeopardize her personal integrity—it extinguishes it.”

Simpson expects the law society will take the matter “very seriously” and act on it promptly.

If it dismisses the complaint, Simpson says she’ll seek a judicial review in provincial court.

“This is where we must start standing up and pushing back on these issues,” she told LifeSiteNews. “If we don’t want to lose the right to retain logic and biological application to reality, we need to step up right now.”