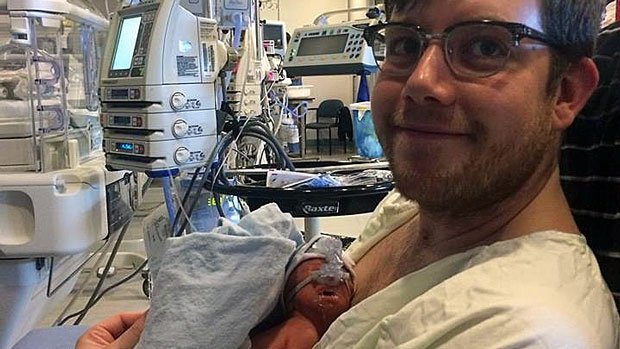 Dylan Benson with his son Iver Cohen Benson, who was born in February

VICTORIA, B.C., February 3, 2014 (LifeSiteNews.com) – A Canadian woman and her unborn child are being kept on life support at the insistence of the husband and father who wants to give his unborn son, now at 27 weeks gestation, what he calls a “chance of survival”.

Doctors declared Robyn Benson, 32, “brain dead” at the end of December, one day after suddenly suffering a massive blood leak to her brain. She was 22 weeks pregnant with the couple’s first child.

“The thought process behind this is that if they can keep her body alive and growing our child until she is 26 weeks pregnant, it will give our unborn son a 60 to 80% chance of surviving a C-section at that time,” Benson wrote on a blog.

The story comes just one week after a Texas father obtained a judge’s order that forced hospital staff to remove life support from his 33-year-old wife who had been pronounced “brain dead.” When her life support was removed she was carrying their 22-week-old baby. Advocates fighting for the baby’s life called the move an “execut[ion] by judicial tyranny.”

While Benson is devastated by the loss of his beloved wife, he believes that he is honoring her by doing everything to protect their child.

“Her family and my friends are all very supportive and all think that my wife would want me to try and give our child the best life possible, so that’s what I’m going to try and do, assuming that all goes well and I actually get to meet him.”

Benson said the “toughest part” is knowing that the day his son is born is also the day he will have to say goodbye to his wife.

“She is my rock. She does everything for us and I can’t believe I won’t get to talk to her again and now if this works, our son will grow up never meeting his wonderful mother,” he writes.

An ultrasound last week showed that the baby is growing and developing well.

“She still looks so beautiful, and for the most part she looks like she’s sleeping. I miss her so much. I’m so proud of her for how strong she is holding up for Iver. I wish so badly that I could talk to her just one more time. I’m trying so hard to stay so strong but when I think about having to live the rest of my life without her, it’s so hard.”

Critics of the “brain dead” criteria for establishing death say the fact that a pregnant woman can continue nourishing a child in her womb explodes the whole theory. In the case of the Texas mother, Operation Rescue President Troy Newman said: “The public has been given the erroneous impression that Marlise is a dead and decaying corpse. Marlise’s heart continues to beat and she continues to nourish her pre-born baby. A rotting corpse cannot do that.”

Benson has taken leave from work to be with his wife and unborn child around the clock.

Family and friends have stepped in with offers of support and encouragement. A fundraising campaign has been launched to cover Benson’s expenses during his absence from work. Over $46,000 have been raised out of a $36,000 goal.

“My days right now consist of a lot of time with family and close friends, and of course time at the hospital visiting Iver and Robyn, and hoping every minute for their health to continue,” wrote Benson in his fundraising appeal.