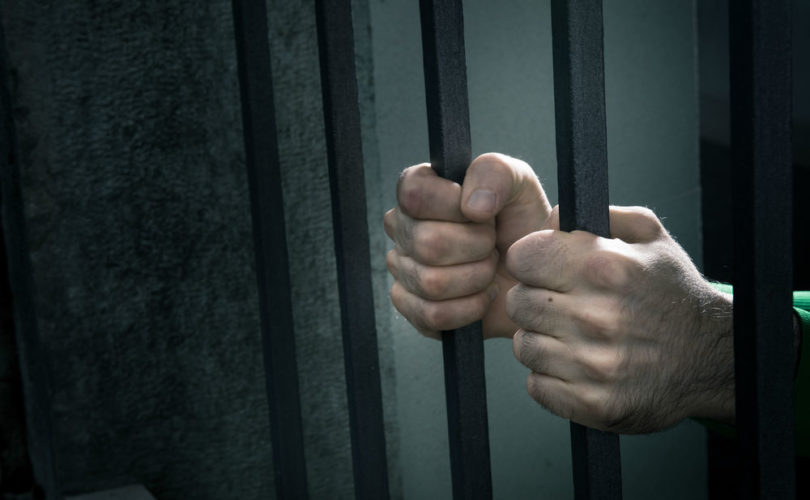 PERTH, Ontario (LifeSiteNews) — A Canadian man is now being represented by a top constitutional law group after he was denied release despite qualifying for parole because he is unvaccinated against COVID-19.

“The Justice Centre [for Constitutional Freedoms] has filed a court action on behalf of an inmate eligible for parole who has been denied his freedom purely on account of his vaccine status,” the JCCF posted in a news release last Friday.

“The Justice Centre has partnered with criminal and constitutional lawyer Fergus J. (Chip) O’Connor to launch legal action in the Ontario Superior Court against the Attorney General of Canada and Saint Leonard’s Society of Hamilton, a halfway house, in regard to Covid vaccine mandates that continue to keep inmates in jail who have been approved for day parole,” added the group.

According to the press release, the man, a 33-year-old identified only as “N.M.,” was supported for release into a halfway house on February 10 by his parole officer and the Correctional Service of Canada, but due to the halfway house’s vaccine mandate, is forced to take the experimental jab or stay in prison.

“The Justice Centre is concerned about people being jailed when they are legally eligible to reside in halfway houses. These people must receive a medical treatment under duress or coercion, or stay in jail. There is no free choice under these circumstances,” stated Sayeh Hassan, staff lawyer with the Justice Centre.

“Inmates are some of the most vulnerable individuals in our society, and already have minimal control over their bodies and their surroundings. They are routinely subjected to strip searches and cell searches, and must follow orders at all times. To coerce these individuals to be injected with a vaccine that has no long-term safety data and that has proven serious side effects, including myocarditis, as a condition of enjoying their freedom goes against principles of natural justice,” Hassan added.

“Being forced to choose between freedom and bodily autonomy is not a choice. This is coercion and has no place in a free and democratic society. This is unfair detainment in prejudice to an individual’s right to make medical decisions for themselves,” Hassan concluded.

The JCCF argues that this coercion is a violation of N.M’s protected Charter rights, particularly in light of the fact that the medical community now admits that the so-called vaccines do not prevent transmission or infection, and that the shots carry risks of serious side effects like blood clots and the potentially fatal heart inflammation condition myocarditis.

Since the onset of the so-called pandemic, the JCCF has been on the forefront of fighting the government over COVID-related policies it deems to be violations of the Canadian Charter of Rights and Freedoms.

Most notably, the group has become the legal counsel for the Freedom Convoy, the litigators for a Saskatchewan farmer who had his bank account frozen for making a minor donation to the Convoy, and one of many groups suing Prime Minister Justin Trudeau’s federal government over the invocation of the Emergencies Act.

Speaking generally about mandatory vaccination, JCCF lawyer Kindle Pejovic previously informed LifeSiteNews that “Health Canada’s ‘Canadian National Report on Immunization, 1996’ states that immunization cannot be mandatory because of Canada’s Constitution. Our Charter of Rights and Freedoms protects all Canadians from laws that would attempt to force medical treatment upon them against their will.”