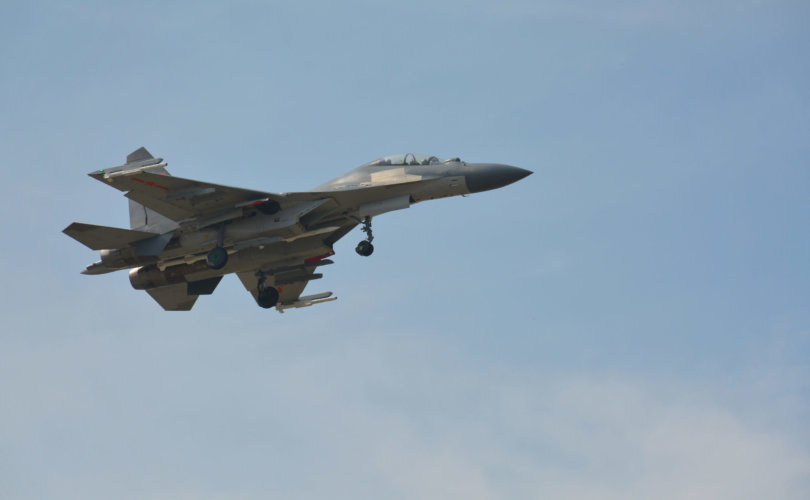 According to a June 1 press release from the CAF, Chinese jets from the People’s Liberation Army Air Force (PLAAF) have been repeatedly “buzzing” Canadian CP-140 Aurora planes, which are taking part in a United Nations mission over international waters.

“In these interactions, PLAAF aircraft did not adhere to international air safety norms. These interactions are unprofessional and/or put the safety of our RCAF personnel at risk,” the CAF noted.

“Such interactions, which occur in international airspace during UN-sanctioned missions, are of concern and of increasing frequency. These occurrences have also been addressed through diplomatic channels.”

According to a Global News report from June 1, various sources from the CAF as well as from some in the federal government revealed that in some instances Canadian pilots were given the “middle finger” midair by Chinese pilots.

The Chinese aircraft are said to have flown as close as 20-100 feet from Canadian planes, which is close enough to make eye contact, according to military officials.

Charles Burton, who serves as a senior fellow at the Macdonald-Laurier Institute in Ottawa, said those distances are “scary close at those high speeds” and could lead to a “disaster in a crash.”

“You do it too much, and eventually, sometime, it’s going to go wrong,” he added.

Burton noted that he is “puzzled as to why China would take the risk of fomenting an international incident that could lead to extremely heightened tensions if the Chinese aircraft leads to loss of Canadian life.”

He added that the government of the Chinese Communist regime is “not responding to Canadian concerns” to “rein in this kind of adventurism” is “very concerning.”

The CP-140 Aurora planes are taking part in drills dubbed “Operation Neon.” According to Canada’s Department of National Defence (DND), there have been at least 60 incidents involving Chinese aircraft hounding Canadian planes.

“In some instances, the (Canadian) aircrew felt sufficiently at risk,” a DND spokesperson noted.

This resulted in the pilots having to “quickly modify their own flight path in order to increase separation and avoid a potential collision with the intercepting aircraft.”

The missions involving the CP-140 Aurora took place from April 26 to May 26 “to support the implementation of United Nations Security Council sanctions imposed against North Korea.”

Tensions between the Chinese Communist regime and Canada have increased over the past few years, most notably after Huawei CFO Meng Wanzhou was detained in Canada on fraud charges.

Michael Kovrig and Michael Spavor, or the “two Canadian Michaels,” for months were detained by the Chinese government in what most regarded as a retaliatory measure for Canada’s arrest of Huawei’s Wanzhou. All three were released last year to their homelands.

Canada recently banned Huawei as well as ZTE from the nation’s telecommunications systems over security concerns.

It should be noted that the Liberal Party under Prime Minister Justin Trudeau voted against the creation of the committee.

Trudeau famously said a few years ago that he has an “admiration” for China’s “basic dictatorship.”

As for China, in recent weeks it has upped its military presence worldwide, notably in the Taiwan area, amid rising global tensions brought on by the Ukraine-Russia war.