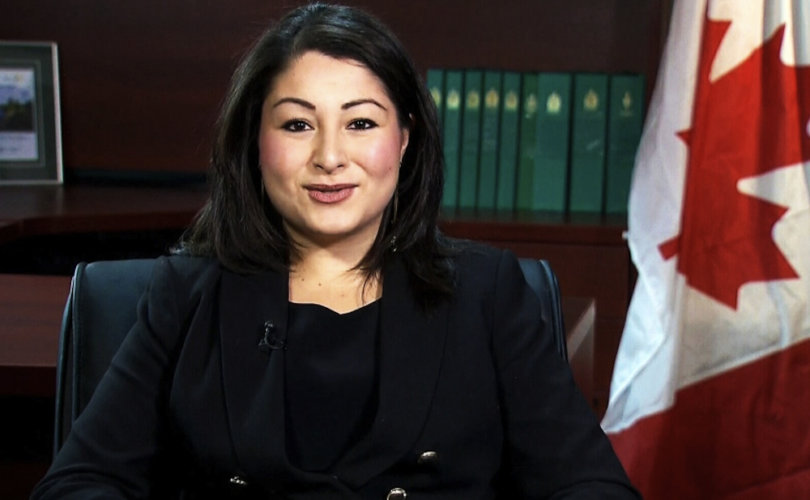 That has one critic saying Trudeau should fire Maryam Monsef if she doesn’t resign for “such an irresponsible and indeed malicious statement.”

But Campaign Life says the neophyte minister is faithfully parroting the abortion rhetoric of Trudeau Liberals and the United Nations.

Monsef made her remarks to the Canadian Press while announcing a $285,000 Status of Women grant to Planned Parenthood Ottawa for a three-year project to make abortion and contraception more accessible.

“Reproductive health rights in Canada and around the world are critical to advancing gender equality and the empowerment of women and girls,” declared the 31-year-old Monsef.

“We’re committed to making sure that women and girls have that choice, because otherwise, this is a form of gender-based violence.”

“So it’s empowering to have an abortion? I don’t know many women – even fervently pro-choice ones – who would want to describe an abortion in those ebullient terms. Tragic, agonizing, brutal – yes. Empowering – no,” wrote Krayden.

To describe denying an abortion as “violence against women” is “an astoundingly breathless and contemptible leap of logic, not to mention a untenable reversal of reality,” he pointed out.

“Abortion is an extremely violent act in itself” against both the mother and her unborn child.

Monsef should resign or be fired, wrote Krayden.

“There are millions of pro-life women in this country: they may be evangelical Christians, Roman Catholics, Mormons or Muslims; they may be blue-collar workers or white-collar professionals; they may participate in the annual March for Life or they may not – but Trudeau’s status of women minister doesn’t represent them.”

Added Krayden: “It is time to put Monsef in the back benches where she can inflict the minimum of embarrassment and damage.”

An Afghan-Canadian with a bachelor of science in biology and psychology from Trent University, Monsef was elected as MP for Peterborough-Kawartha in the 2015 Liberal landslide.

As democratic institutions minister, Monsef made multiple disastrous missteps before Trudeau relieved her of the portfolio in his January 10 cabinet shuffle.

So far, Monsef is proving a reliable mouthpiece for the Trudeau Liberals in her new position.

Her abortion statements represent the Liberal Party “just repeating the absurdity that has been professed at the United Nations for a few years now,” says Matt Wojciechowski, who oversees Campaign Life Coalition’s United Nations portfolio.

“UN agencies and abortion pushers have been trying to declare abortion as a universal human right for decades,” he told LifeSiteNews in an email.

“And because of strong opposition by the majority of the world, the pro-abortion activists have resorted to making this ridiculous claim out of desperation.”

The “main problem here is that when the United Nations says ‘Jump’, the Trudeau government says ‘How high?’” he added. “Trudeau’s obsession with exporting abortion worldwide is proof of that.”

“She’s working to ensure that women around the world have access to reproductive health rights, so we believe in that domestically as well as having that access internationally,” Monsef said.

After President Trump reinstated the Mexico City Policy, which prohibits U.S. funding for groups promoting and providing abortion outside its borders, Bibeau announced that the Liberals supported the Dutch-initiated international abortion fund to make up the resulting $600 million shortfall.

She told the CBC’s As It Happens January 27 that she spoke on the phone to Dutch International Development Minister Lilianne Ploumen about Canada’s involvement.

“It was an easy pitch because we both agree on the importance of women empowerment, and that sexual and reproductive health and rights is so important,” Bibeau said.

Bibeau assured Ploumen “we will increase our funding to sexual and reproductive health and rights,” although it’s not clear if that would be directly through the Dutch fund.

Canadian Prime Minister tweeted a photo of himself and the Planned Parenthood president in October to mark the abortion giant’s 100th anniversary.

My warmest congratulations to @CecileRichards and Planned Parenthood on its hundredth anniversary. Here's to another #100YearsStrong! pic.twitter.com/DKC1IAFrwI

And as Liberal leader, Trudeau attended a Planned Parenthood Ottawa fundraiser in 2014.

“The current Liberal government and Planned Parenthood have very much in common,” noted Wojciechowski.

“The only difference is that our government —  for the time being — isn’t involved in the grisly business of selling dead baby parts.”