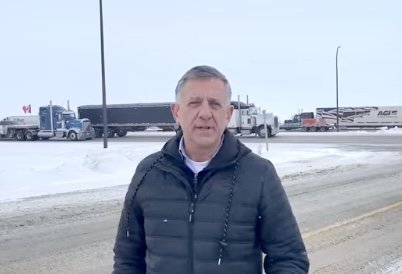 “Trudeau has arbitrarily villainized these brave men and women are a threat,” Falk said in a Facebook post on Monday at a trucker protest against COVID jab mandates at the Canada-U.S. border in Emerson, Manitoba.

The slow-rolling protest by truckers against COVID jab mandates led to major delays in the area.

According to a report in the Winnipeg Sun, Emerson protest organizer Rick Wall, who owns his own trucking company, said it was “100% bravery” on Falk’s part for being part of the protest.

According to Wall, his trucking company will suffer from the COVID jab mandates, as he is aware that most of his employees have not had the jabs.

Wall said that they have been “craving for a politician to see both sides,” as mandates, which came into effect  January 15, “open the door for discrimination.”

He noted that never in Canada have “we segregated people based on medical decisions that they make,” adding that he thinks its “morally wrong on all levels.”

Falk, who serves as MP for Provencher, said in a statement, as reported by the Winnipeg Sun, that truckers are the latest “victims of Justin Trudeau’s vaccine witch hunts.”

He added that he was “proud to stand in solidarity with truckers at the Canada/U.S. border,” to call on “Trudeau to reverse this discriminatory and foolish mandate.”

“His policy of vaccine vendetta against our hard-working truckers is going to drive up the costs for our people, drive people out of work and leave us with empty shelves.”

The mandate came as a surprise to many after only a day earlier, multiple media reports surfaced saying the Canada Border Services Agency (CBSA) said un-jabbed truck drivers would be allowed to enter Canada from the United States.

The jab mandate for truckers was first announced November 19 by the federal government.

According to the Canadian Trucking Alliance (CTA), it is estimated that the mandate will impact up to 30,000, or around 30 percent, of Canadian truck drivers and about 16,000 American truck drivers who enter Canada regularly.

Some Canadian trucking companies are reporting driver shortages as a direct result of the COVID jab mandate for all haulers crossing the border. The new policy has already caused food supply issues as well.

Truckers in Canada are fighting back against the jab mandates, however.

The group to date has raised more than $600,000 in the span of only a few days, which to help go toward the cost of “fuel, food and lodgings to help ease the pressures of this arduous task.”