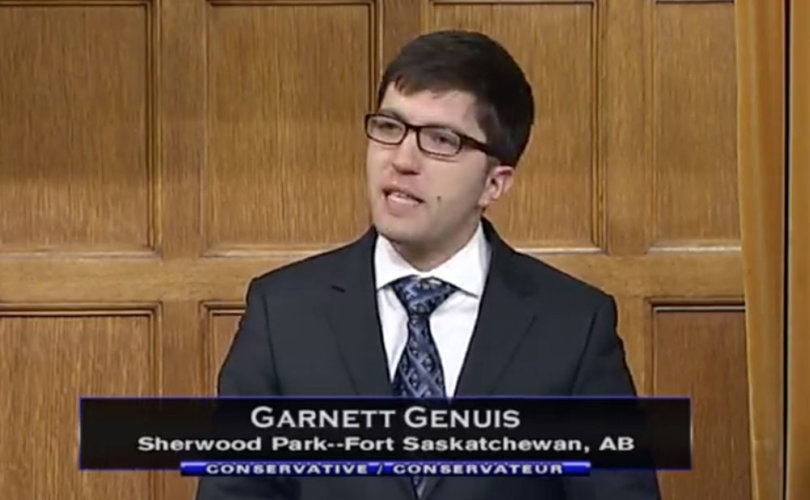 April 14, 2016 (LifeSiteNews) – Garnett Genuis, Member of Parliament for Sherwood Park – Fort Saskatchewan and past member of the Special Joint Committee which studied Euthanasia and Assisted Suicide, issued the following statement today on the Liberal government’s tabling of legislation on the issue:

“I have reviewed the legislation tabled this morning to legalize euthanasia and assisted suicide and am gravely concerned. This legislation does not protect the conscience rights of healthcare practitioners. The trumpeted ‘safeguards’ are highly subjective and do not provide the necessary certainty that the vulnerable will be protected, and there is no mechanism in this legislation for advance legal review.

“The absence of conscience protection will have a significant negative impact on the medical profession. The absence of objective safeguards or advance legal review makes the so-called ‘safeguards’ in this legislation a matter of mere smoke and mirrors.”

With respect to conscience, Genuis advocates a national standard to protect healthcare practitioners, ensuring that concerned physicians aren’t forced to relocate to a different province which does respect their conscience rights. Genuis also noted that conscience rights are protected in Section 2 of the Charter.

With respect to so-called ‘safeguards’, section 241.2 (4) of the legislation says that if a person is incapable of giving written consent, another person is given the ability to do so on their behalf. This almost completely eliminates the effectiveness of the written consent requirement. Further, the legislation references physical or psychological suffering in 241.2 (2), which leaves the door open to mental illness being a criterion. References to ‘foreseeable’ death are clearly too ambiguous, since no parameters are set for what constitutes foreseeable. (Death is, in some sense, foreseeable for all of us).

The intended safeguard of a brief wait time is also undermined by its subjective application, most disturbingly in the event of an imminent loss of ‘capacity to provide informed consent.’ Euthanasia should not be performed simply because it appears the patient may lose the ability to consent to that act.

Constitutional law expert David Baker, who appeared before the Special Joint Committee, made specific recommendations about a process of advance legal review which would be transparent and time sensitive, but would also ensure that legal criteria are met before a person dies. Genuis believes that the government should have taken Baker’s proposals into consideration.

Genuis noted: “The combination of woolly ‘safeguards’ and no system of advance legal review means that doctors will be expected to make complex legal decisions in an unclear legal environment, and patients will be able to ‘doctor shop’ for those with the most permissive approaches. This set-up is not fair to patients, is not fair to doctors, and does not protect the most vulnerable. I urge the government to make urgent and necessary amendments to this legislation that address these problems.”