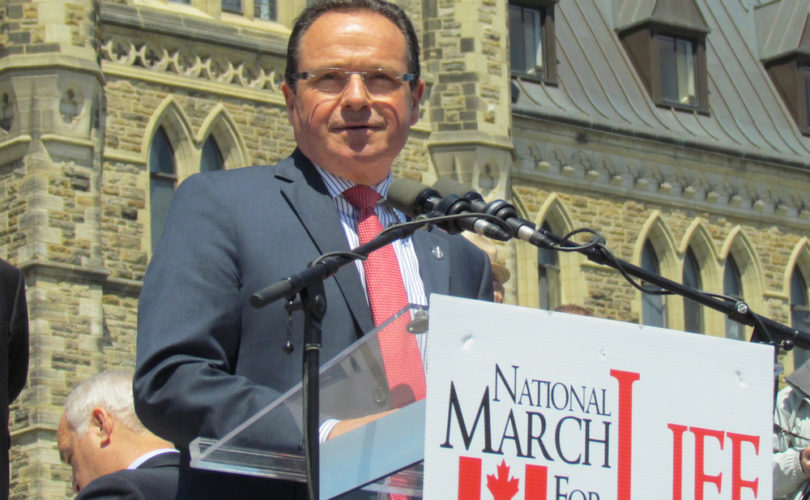 Conservative MP Harold Albrecht, a dissenting member of the federal committee on euthanasia, speaks at the March for Life in May 2015.Patrick Craine / LifeSiteNews

OTTAWA, February 9, 2018 (LifeSiteNews) – Conservative Members of Parliament (MP) are ramping up opposition to the Liberals’ controversial pro-abortion summer job grant attestation requirement, with one MP sponsoring a petition against it, and leader Andrew Scheer vowing his party “will fight the Liberal values test every step of the way.”

Ontario MP Harold Albrecht has now sponsored an e-petition on the House of Commons website asking the Liberals to drop the attestation. The petition calls upon the government of Canada to “remove this discriminatory requirement and allow Canadians to continue to exercise their freedom of religion and freedom of expression without facing institutionalized discrimination by the Government of Canada.”

The petition has been signed by over 1,250 people since its Tuesday launch, and will remain open until June 6. It can be found here.

Albrecht lambasted the Liberals in a Facebook video for implementing what he described as a “values test” that is divisive and discriminatory.

“This isn’t about the activities or services an organization is engaged in, this is about targeting the personal beliefs of the individuals who run those organization, and threatening to deny funding if those beliefs don’t line up with Justin Trudeau’s own values,” Albrecht says.

“This is Canada. It’s time for Justin Trudeau to stop deliberately dividing Canadians.”

“What we don’t know is whether or not other government services may also be subjected to the same values tests,” he said.

Indeed, the Liberals have banned activities or projects that do not respect “reproductive” or LGBTQ “rights” from receiving funding from the Canadian Service Corp, the youth volunteer initiative.

Albrecht said the Liberals have extended the deadline to apply to Canada Summer Jobs program from February 2 to February 9, but have not removed or altered the attestation.

Indeed, Trudeau and Employment Minister Patty Hajdu remain adamant the attestation does not affect religious groups, even though they have received a letter signed by 87 faith leaders asking them to drop it.

The religious leaders say the attestation is an “ideological test” that violates their Charter rights, and they cannot in conscience sign it.

Conservative leader Andrew Scheer echoed this in a video posted to Facebook Tuesday.

In bringing in the attestation requirement, Trudeau is “telling Canadians he won't defend their Charter rights unless you agree with him. This has no place in our tolerant, diverse society,” noted Scheer.

“The government does not have a right to force people to sign a form that violates their conscience or beliefs in order to qualify for government programs or funding,” he said.

“To allow the government this power would be to threaten our fundamental human rights.”

Scheer said the Conservatives will “fight the Liberal values test every step of the way.”