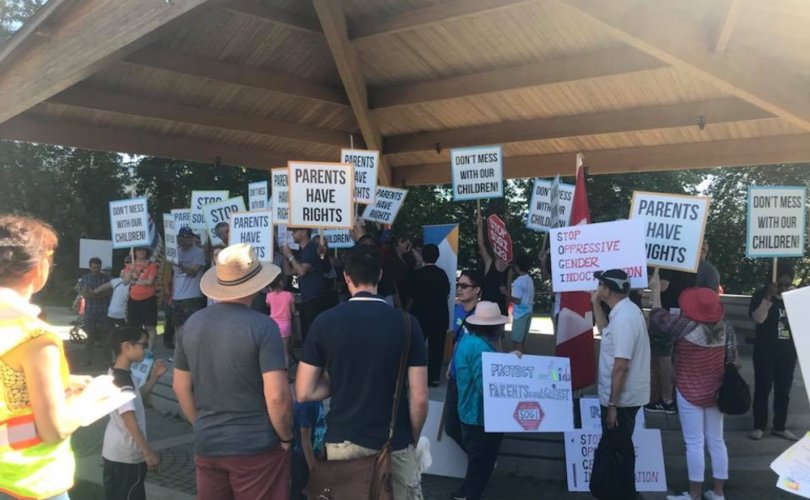 A parents’ rally to stop the teachings about sexual orientation and gender identity in public schools comes face-to-face with counter protesters in a park in the Vancouver suburb of Port Moody.Rick Glumac / Facebook

PORT MOODY, British Columbia, July 20, 2018 (LifeSiteNews) – A parents group fighting to stop schools from teaching about sexual orientations and gender identity is building up a war chest to take on the British Columbia Ministry of Education.

“We’re raising $3 million to $5 million for this from public campaigns,” she said Friday.

The funds already raised have allowed the organization to set up offices in 2,500 square feet of space  – roughly the size of a modest, two-storey bungalow – in Langley, British Columbia. The lawyer is to be hired in the next few weeks and legal action to be launched in September.

“As parents, grandparents and community members we refuse to be bullied into silence by the sex activists,” reads a Culture Guard brochure. “Instead we have decided to stand together, united to end the political abuse of our children, culture and democracy.”

According to Simpson, sexual orientation and gender identity education, often simply called SOGI, allows children to rename themselves when at school and go by whatever pronouns they wish to use, including any of the pronouns now in vogue by transgender activists. Much of that activity is hidden from parents, claims Simpson.

She’s hoping Culture Guard can get an injunction from the courts to put an end to this type of education in public schools.

“We’re rallying people together because we’re going to take the government to court for bringing in SOGI illegally,” she said. “Here, the law is that parents have to be consulted with regards to educational goals.”

Fighting back against the LGBTQ agenda that all sexual orientations are equally healthy and normal and that anyone can identify as whatever gender they wish is not without its hazards.

“I’ve had to endure death threats and (threats of) my house being burnt down and my children being raped,” said Simpson.

Then, there’s pushback from governments and those who support the ideology of gender fluidity.

Last Saturday, Simpson came face-to-face with some of that. After organizing a Stop SOGI rally for Rocky Point Park in the Vancouver suburb of Port Moody, Simpson had the $187.74 she had paid for a city permit returned to her less than two days before the event.

Her group was also threatened with a fine and eviction from the park should the Stop SOGI rally go ahead anyways.

“If you still choose to go to Rocky Point Park this Saturday, you will be in contravention of Parks and Facilities Bylaw BL2894-C which would result in a fine and a request to leave the park,” reads an e-mail from Jim LaCroix, Port Moody’s recreation manager, and Kate Zanon, the municipality’s general manager of community services.

“If the request from the bylaw officer is not complied with, assistance from the Port Moody police will follow,” LaCroix and Zanon warned.

According to that e-mail, the City of Port Moody canceled the group’s permit to hold the rally in the park because the municipality does not “rent our spaces to groups supporting or opposing an issue.”

Despite this warning that Culture Guard could be hit with a fine, the group went ahead with the rally and attracted roughly 280 people, said Simpson.

They were, however, met with counter-protestors, including Port Moody-Coquitlam MLA Rick Glumac, who held signs and disrupted the Stop SOGI event.

On Facebook, Glumac suggests those trying to rid schools of SOGI are motivated by hate.

“Several of us walked into the heart of an anti-SOGI rally today with signs promoting love, tolerance and inclusion,” wrote Glumac on his Facebook page. “They didn’t like that we were there, asked us to leave, saying this was their rally. But they didn’t have a permit and it’s a public park so we proudly stayed. There’s no place for hate in our society.”

There were about seven counter-protesters, including Glumac, at that Stop SOGI rally and they tried to take over the podium and would not leave the stage area, said Simpson.

“At our last rally in Vancouver, we had 400 people show up on four days notice,” said Simpson. “In Chilliwack, we had 500 people.”