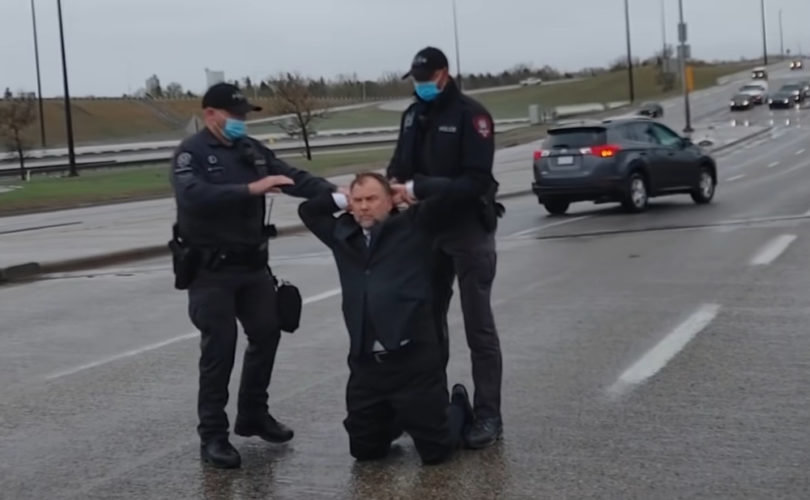 CALGARY, Alberta, May 10, 2021 (LifeSiteNews) — A Canadian pastor was arrested in dramatic fashion during a highway takedown on his way home after holding a Saturday service in defiance of COVID-19 health rules. The pastor had earlier made headlines for calling police and health inspectors coming to his church for two unannounced health visits “Gestapo Nazis.”

Members of the Calgary Police Service (CPS) stopped Pastor Artur Pawlowski of the Cave of Adullam church and his brother Dawid Pawlowski. The arrested and charged the pair “with organizing an illegal in-person gathering.”

Video of the arrest, which has been viewed thousands of times and has gone viral, shows multiple police cars surrounding the car Pawlowski was riding in with his brother on a busy road in Calgary.

Video shows his brother Dawid being dragged away in a similar manner. Both are currently in police custody.

The arrests followed a church service held at the Cave of Adullam church, which went against an earlier warrant issued against him and his church.

Earlier in the day before his arrest, in a video posted online by Rebel News, church members chased out multiple uniformed police from the church property.

Artur Pawlowski's supporters have ejected Calgary Police from the church. We expect they will return in force. @RebelNewsOnline pic.twitter.com/fz15nDlhit

LifeSiteNews was able to get a hold of Pawlowski’s son on Saturday, who confirmed the arrest of his father and uncle. Pawlowski’s son said that lawyers were working on next steps.

He is a well-known street preacher in Calgary and is renowned for feeding the homeless. He has been running Calgary-based Street Church Ministries for over 20 years and has been a vocal opponent to coronavirus lockdowns.

CPS said the brothers were arrested for violating the new “court order obtained by Alberta Health Services (AHS) in relation to mandatory compliance of public health orders for gatherings.”

“It is important to understand that law enforcement recognizes people’s desire to participate in faith-based gatherings as well as the right to protest. However, as we find ourselves in the midst of a global pandemic, we all must comply with public health orders in order to ensure everyone’s safety and wellbeing,” added the CPS in its statement.

The court injunction was issued in relation to a planned protest at an Alberta restaurant, The Whistle Stop Café, that was shuttered by AHS for staying open contrary to COVID-19 health rules.

The protest was held on Saturday in defiance of the new court injunction, with hundreds present.

“On May 6, the Court of Queen’s Bench granted a pre-emptive injunction against all planned events in contravention of public health orders. The injunction essentially defines these events as illegal public gatherings that do not comply with masking, attendance limits and physical distancing requirements,” said the RCMP in news release.

In essence, the court injunction has made it illegal for anyone in Alberta to protest government restrictions contrary to the government orders, despite the fact that protests are allowed under the charter of rights and freedoms.

Pastor Henry Hildebrandt of the Church of God in Ontario, who himself has kept his church open in defiance of provincial COVID orders, posted an image of Pawlowski’s arrest on Twitter. “Earlier this afternoon, my fellow pastor Artur Pawlowski was arrested in Calgary for the crime of holding a church service, as he does every Saturday morning. Are you awake yet?” he tweeted.

A Rebel News report stated that Pawlowski currently remains in jail. As of Sunday, he had still not talked with a lawyer and was forced to spend the night sleeping without a blanket on bare concrete.

This is the second time a Canadian pastor has been arrested and jailed because they held church services in defiance of draconian COVID-19 health rules. Notably, both arrests have taken place in a province under United Conservative Party (UCP) Premier Jason Kenney, who is a Catholic.