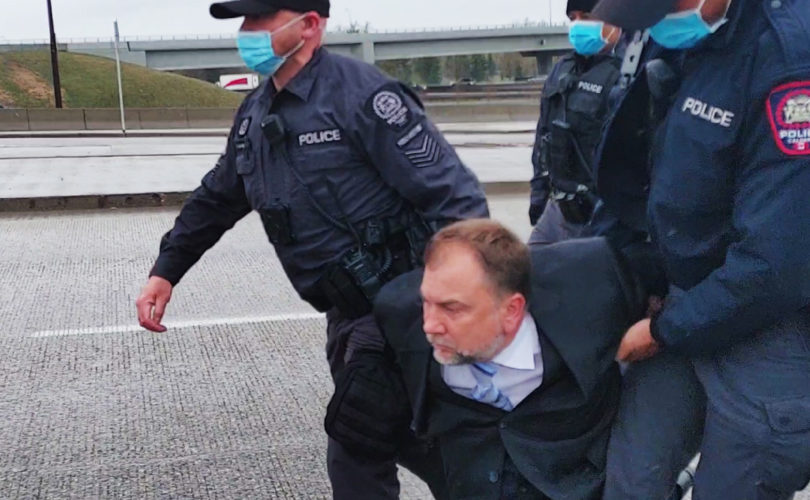 CALGARY, Alberta (LifeSiteNews) – During a court appearance yesterday to argue against a pending jail sentence, Christian pastor Artur Pawlowski told a judge that he stood before the court as a “political prisoner of conscience.”

“The AHS (Alberta Health Services) and the politicians have found a new way of penalizing anyone that is opposing their unconstitutional medical tyranny. They hate the idea that they have been exposed for what they really are: liars, hypocrites and cheaters,” Pawlowski said to Justice Adam Germain in a statement he read before the court.

“I am here in this court as a victim of a personal vendetta from a very corrupted and evil, lying and deceiving politicians. If I am guilty of a crime, then so it is the Premier of Alberta Jason Kenney with a bottle of Jameson Irish whiskey on the patio of the Sky Palace.”

In June, Germain ruled that AHS had proved that the brothers were guilty “beyond a reasonable doubt of contempt” of court. This came after the brothers earlier breached an injunction order against them that said they would go to jail if they held church services.

In July, AHS asked the court for a 21-day jail sentence against Pawlowski for “openly” flaunting COVID rules after holding worship services at his Cave of Adullam church located in Calgary in the spring of 2021.

The court was adjourned until September, and at Monday’s hearing AHS lawyer John Siddons argued that in addition to a 21-day jail sentence, Pawlowski should be fined $2,000 and pay $15,000 in costs. Siddons also recommended Dawid face a 10-day jail sentence.

The Pawlowskis’ lawyer, Sarah Miller, argued Monday that the time already served in jail by the brothers “is more than reasonable to sanction.”

“This is a civil proceeding that is designed to compel compliance with the court orders and that is exactly what has occurred,” Miller said. “As far as general deterrence, they have been deterred. They have spent their time in jail.”

The court is adjourned until October 13, when Germain will give his final ruling.

Pawlowski’s statement to the court lasted about seven minutes, during which he wasted no time blasting what he called “hypocrisy” and “double standards” that the “politicians and the AHS have been embarrassed by.”

“I have seen this growing back behind the Iron Curtain under the boots of the Soviets. I have heard from my grandparents about the similar tactics during the time of the Nazis,” Pawlowski said. “Persecuting churches and the clergy, and that what we are talking here about. Canada has fallen very low.”

Pawlowski said that the government and AHS were using the court as a “personalized weapon against us the whistleblowers that are simply exposing their corruption.”

“We do not have flu crisis. We have opioid crisis in Canada, alcoholism crisis, record high among the youth suicide crisis, homelessness crisis, hopelessness crisis,” he said. “As a pastor, I do not just deal with the physical problems but also emotional, spiritual and mental as well. People in our community are dealing with loneliness, stress, grief, loss, and isolation, and they desperately need their pastors.”

Pawlowski then said he has been a “front-line” worker in a time of “crisis.”

“People need more church, not less, More prayers, not less,” he said. “We, the clergy, are essential. Now the Church is more essential than the corrupted politicians are.”

“How can the politicians say that they care about the health and safety of people if they are imposing rules and are not even bothering to follow them? If they claim these rules are about safety but they violate their own mandates, then it must not be about safety — so then what exactly are these mandates are about?”

Pawlowski spent the better part of July and August in America on his Courageous Faith tour, telling the crowds about his ordeals with police and health officials who targeted him for not following local COVID rules.

As for Kenney, it is anticipated that he will introduce more COVID restrictions along with a vaccine passport, despite saying in July he would never do so.

It is unclear at this time if churches will again face restrictions on congregation size.