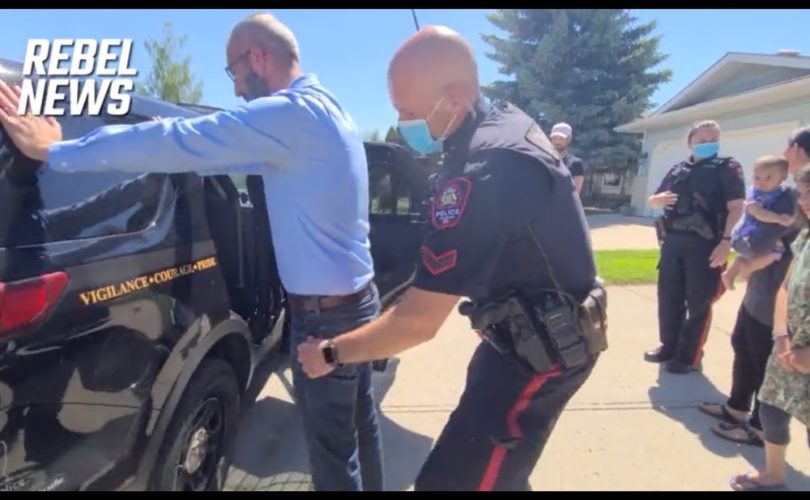 CALGARY, Alberta, June 25, 2021 (LifeSiteNews) — Jailed Canadian Pastor Tim Stephens wrote in a letter to Alberta Premier Jason Kenney that his government’s handling of the coronavirus crisis has made his province an “embarrassment of conservative governments” the world over.

“Mr. Premier, I know these restrictions will be lifted soon. I ask that you refrain from using imprisonment ever again to seek compliance to health orders. My imprisonment may be applauded by the left, but it has made Alberta the world-wide embarrassment of conservative governments,” wrote Stephens in a letter dated June 23.

“As restrictions are lifted, return responsibility to the people of Alberta and return it for good. May this not be a pattern for your government in the future.”

On June 14, Stephens was was arrested and charged a second time by members of the Calgary Police Service (CPS) for allegedly breaking COVID-19 health rules.

He is behind bars at the Calgary Remand Centre until his next court appearance scheduled for June 28.

Stephens’ new charges and arrest follow a service he held on June 6. The pastor had his church doors shut by police on June 5, but continued conducting services nonetheless, albeit in secret.

A video of his arrest shows Stephens’ children crying while saying “goodbye daddy,” as he was placed inside a police car.

In his letter to Kenney, Stephens pleaded with him and elected MLA’s “to uphold our highest laws to which you are held to account.”

“Temporary public health orders do not supersede our Alberta Bill of Rights, nor our Canadian Charter of Rights and Freedoms. I know that I am in the minority, but these laws are designed to protect the minority,” wrote Kenney.

Stephens wrote that he has missed many important family events, including his wedding anniversary and Fathers’ Day.

“My children will remember this Fathers’ Day as a time when they wept over the phone as I did my best to stay composed before other inmates while expressing my love for my children,” penned Stephens. “Your government has wrongfully put me on the horns of a dilemma. Either I forsake my convictions before God, or I’m imprisoned for some unknown time, taken from my family and the church community I’m entrusted to serve. If I choose the former then I deny God, thus I’m left facing the consequences of the latter. My conscience is captive to the Word of God and shall not be moved.”

Stephens’ letter also took aim at Alberta Health Services (AHS) officials who claimed they tried to work with him to seek compliance with COVID-19 rules before his arrest.

“I’ve shared publicly, and on many occasions how our theological convictions, mined from never-changing Scripture, come into conflict with your ever-changing ‘laws.’ AHS continues to make public statements that they tried “working” with us, which is shorthand for them seeking unbending compliance through greater threats of punishment,” wrote Stephens.

“Not once has anyone in your government shown any interest in actually working with us.”

Stephens’ first arrest on May 16 also occurred in front of his family, after he held an indoor church service that contravened the provincial government’s COVID rules. He was released after a judge agreed to let him out of jail on the condition that he abide by a now-amended May 6 injunction order issued by AHS.

Liberty Coalition Canada will be holding a “freedom” rally in support of Stephens this Saturday at the Calgary Remand Centre, starting at 1 p.m.

Other guest speakers are Pastor Jacob Reaume and Pastor Michael Thiessen. Both Reaume and Thiessen are facing thousands of dollars in fines for breaking COVID rules in the provinces they minister in.

Jay Cameron, Litigation Director for the JCCF, recently said that health officials “abused” their authority by arresting Stephens, and that a judge’s order used to detain Stephens “does not apply” in his situation.

“It is our position that Alberta Health Services (AHS) is engaged in an intentional act of public deception and abuse of authority in arresting Pastor Stephens and others,” said Cameron.

Cameron argued that AHS used a May 13 order from Alberta Associate Chief Justice Rooke to justify the arrest of Stephens, but that it does not “apply to the public broadly.” The order was originally issued in relation to a planned protest at an Alberta restaurant, The Whistle Stop Café.