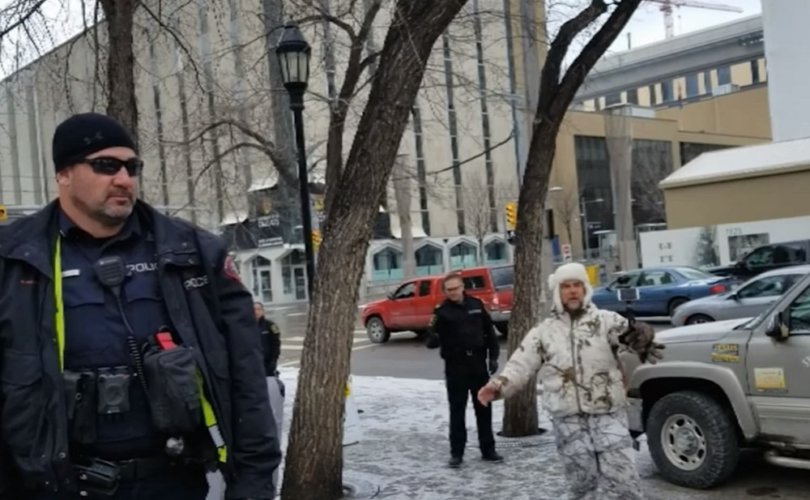 CALGARY, Alberta, April 21, 2020 (LifeSiteNews) — A Canadian street preacher known for feeding the homeless is vowing to fight a “social distancing” health fine he received for conducting an outdoor ministry.

Artur Pawlowski runs the Calgary, Alberta–based Street Church Ministries. He was fined $1,200 on April 3 by the Calgary Police Service for violating Alberta Health Services public health orders, put in place due to the coronavirus. Police said that his outdoor service had more than 15 people in attendance.

“When the police officers showed up, I was actually packing everything,” said Pawlowski to LifeSiteNews, noting that he worked as fast as possible to avoid line-ups while feeding the homeless.

Pawlowski said he has had to suspend all his outdoor services at this time or face even steeper fines.

Pawlowski said a video he provided to LifeSiteNews, shows that there were not more than 15 people in attendance.

Recorded by Pawlowski’s friend, the video shows at least one police officer pushing a homeless person, which Pawlowski says contradicts the very laws he was fined for breaking.

The video also shows the moment when Pawlowski receives his ticket and is then warned that if he violates the health order again, he will be fined. In response, he can be heard saying to the police officer, “So you’re proud of yourself,” to which the officer responds, “I’m doing my job.” Pawlowski then says, “Like a Nazi, a good Nazi that is doing his job. Tell that to those homeless people, see them, see them.”

Pawlowski says he does not have any intention of paying the fine, and he feels he was unfairly targeted. He is scheduled to appear in court on June 12.

“I believe it’s outrageous, I believe it’s illegal, they bullied me and again they targeted specifically me,” he said to LifeSiteNews.

Pawlowski has been running Street Church Ministries in Calgary for over 20 years. Four times a week outside Calgary City Hall, he “preaches the Gospel” to the homeless and others in the area. As part of his preaching, hot soup along with sandwiches are provided to those in need.

Pawlowski told LifeSiteNews he has all the relevant permits in place to be able to provide his street ministries legally. This includes having worked with the chief by-law officer and passing a health inspection so he could safely provide food.

Before the fine, officials told him he could keep operating so long as he followed social distancing rules, something Pawlowski said he was happy to follow.

“I had all the permits and passed all the health inspections…we provide essential services to the mentally ill and the people that are sleeping outside,” Pawlowski told LifeSiteNews.

“Everything I do is for the glory of God. I am not doing this myself.”

In late March, the Alberta government announced stricter measures for large gatherings, banning all indoor and outdoor funerals, weddings, and worship services with 15 or more people in attendance.

Fines for those who break the public health orders range from $1,000 for a first offense to $500,000 for more serious and repeat offenses.

In a CBC report of the incident, Calgary police said Pawlowski was warned not to proceed with the Friday service in light of new government public health orders.

Pawlowski confirmed this fact with LifeSiteNews, saying he was notified one hour before his planned Friday street church service that his permit had been revoked. The reason given, according to Pawlowski, was that “the Alberta government said no gatherings in a public place are allowed anymore.”

Despite the police warning call, Pawlowski proceeded with his service. He told LifeSiteNews that it was not until his service had ended that 12 police officers showed up to issue the fine.

Pawlowski told LifeSiteNews that many of those who attend his street ministries cannot go to the regular homeless shelters available in the city. This is due to the fact a lot of the people he serves have severe mental illness. Pawlowski added that a lot of the homeless are afraid of the police due to past criminal behavior.

Rebel News has retained a lawyer for Pawlowski and is vowing to help him fight his ticket. The media outlet launched a petition titled “FightTheFines.com” on behalf of his case as well as others.

The Rebel News petition reads, “Ordinary Canadians are being fined extortionate amounts for going outside while the prime minister visits cottage country. Can you help us fight this unreasonable infringement on our civil liberties?”

In April of 2007, Pawlowski was fined for using a bullhorn so he could preach in a public park. Pawlowski fought the fines and got them overturned, but the City of Calgary later won a court appeal and had the earlier acquittal voided.

In 2019, he drew the ire of LGBT groups in Calgary for a video he posted titled “If it is not God’s Kingdom, it will be the devil’s.” This video shows him calling out rainbow-painted planters installed at a local market. He called them “a lie from the pit of hell.”

Recently, a lawyer for the Alberta, Canada–based Justice Centre for Constitutional Freedoms (JCCF) told LifeSiteNews the firm has concerns about people’s freedoms coming under attack due to lockdown laws.

Last week, the JCCF voiced its concern that the Canadian province of Alberta’s plan to track citizens via cell phones to “deal with” those who break quarantine is government overreach.

Canada has been in a nationwide lockdown since early March, with all public schools, churches, sporting events, and sit-down restaurants, and most stores deemed non-essential, shut.

As of today, Canada has registered just under 37,000 coronavirus cases with 1,690 deaths. Alberta, which has a population of just over 4 million people, has recorded 2,908 confirmed cases with 59 deaths.

The JCCF has dedicated a portion of its website as a place to hold the government to account during the coronavirus pandemic, ensuring that “in unprecedented times like these, the Canadian Charter of Rights and Freedoms matters more than ever.”

Recently, whistleblower Edward Snowden warned that authorities around the world are exploiting the pandemic to increase surveillance and track individuals.