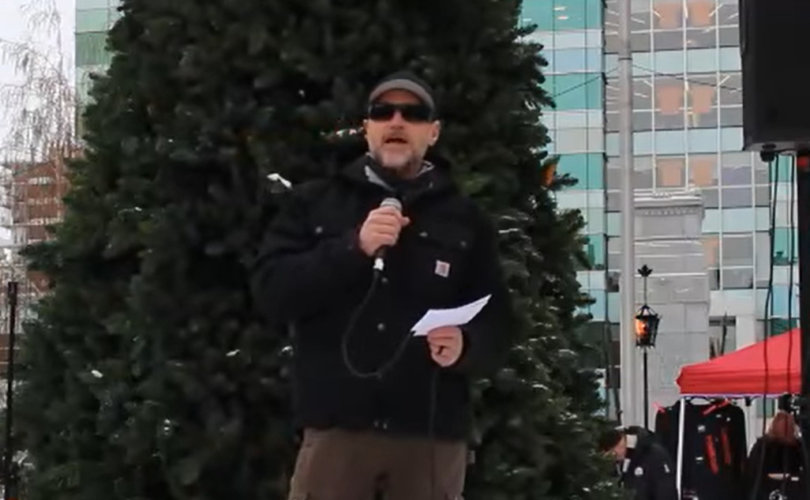 CALGARY, Alberta (LifeSiteNews) — A Calgary police officer who was suspended without pay for refusing the experimental COVID jab gave a powerful resignation speech at a pro-freedom rally this weekend.

On Saturday, 24-year Calgary Police Service (CPS) veteran Brian Denison announced his resignation from the force, after he was recently suspended without pay for refusing the experimental COVID jabs, and reported to the crowd that he has since resigned from his post because his superiors told him that he is not allowed to speak publicly about the coercion he is facing or the potential illegality surrounding the service’s vaccine policy.

“I decided I was going to sleep on that because that’s a direct order written from high up the ladder. So, I did, I slept on it. I gave it a good prayer to God about what’s going to happen. So, this morning, unfortunately, I turned in my resignation because I cannot abide by what they are doing,” added the former officer, whose statement was met with cheers and applause. “Their orders are wrong. This government’s orders are wrong. Do not listen to them.”

Denison came to prominence earlier this month when he released a video of himself, in uniform, stating publicly that he was not going to comply with the Calgary Police Service’s COVID-19 vaccination policy and that he urged other officers to do the same. As a result of his so-called non-compliance, he was placed on unpaid leave.

The coercive mandate, which went into effect December 1, requires all employees of the CPS to either provide proof that they had been “fully vaccinated” against COVID or agree to subject themselves to frequent testing, or else they would be suspended without pay.

While many Canadians are opposed to mandatory shots on both legal and moral grounds, constitutional rights lawyer Rocco Galati has warned that mandatory testing is also illegal under the Criminal Code, and therefore should be resisted as part of the fight against encroaching tyranny.

According to Galati, per the 2017 Genetic Non-Discrimination Act in the Criminal Code, “it is a criminal offence punishable by fine, and a maximum of five years in jail, for anyone to conduct a DNA or RNA test to determine whether or not, that person is susceptible to transmitting a disease.” Also prohibited in the law is requiring a test as a condition of continuing a contract, such as employment, or providing goods, services, or access to facilities.

Denison told the crowd, “The chief, the police commission, and the mayor are all wrong. We cannot continue to allow them to control our lives. We have a constitution in this country of ours and that constitution is the supreme law of our country. We have Charter of Rights and Freedoms, and they are breaking them all.”

“Don’t be fearful of what they can do because they can do nothing. You have all the power; they work for you. If we don’t want them, you vote them out. You put pressure on them. We do not want them. They are not the leaders that we need … I just want to let you know that I’m not going to be disappearing. I’m not going to be standing down from this tyrannical behavior … We need more like us to stand up. Thank you.”