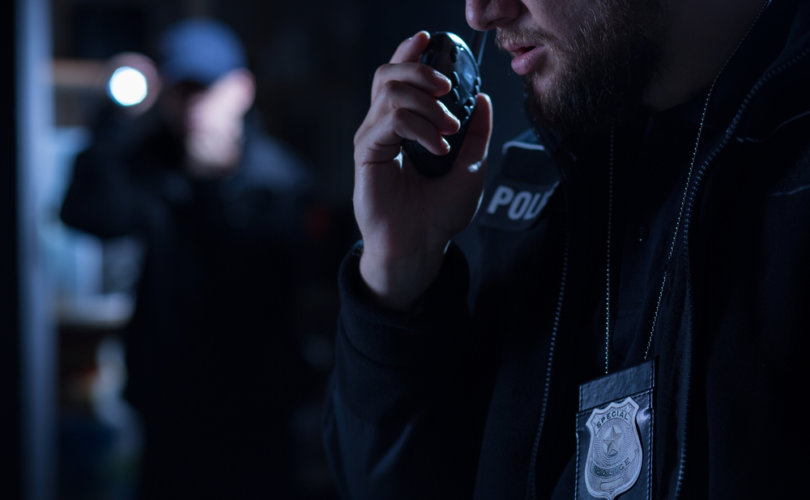 FLINTON, Ontario, October 13, 2020 (LifeSiteNews) — Ontario police showed up after midnight with flashlights and banged on the door of a 32-year-old woman living alone to perform a COVID quarantine check last week. The terrified woman, who was self-isolating due to travel,  locked herself in the bathroom, believing intruders were breaking in to abduct her and worse.

The woman's father says he is filing an official complaint with the police and is considering legal action for “significant suffering damages” that he says his daughter experienced as a result of the police action.

The father, who declined to be interviewed by LifeSiteNews and asked that his personal details not be published, sent an account of the incident to Ontario Member of Provincial Parliament (MPP) Randy Hillier, who posted it on his website, Facebook and Twitter.

Here are the results, now police can do what they want.
Are we to become like Australia? You tell me

We must stop this Gov overreach #onpoli #COVID19 pic.twitter.com/RIVNLgMvLa

In his October 6 email, the father says that his daughter had returned from abroad and was quarantining alone in a family property in the hamlet of Flinton.

In March, Prime Minister Justin Trudeau’s Liberal government brought in emergency orders under federal Quarantine Act requiring individuals entering Canada from other countries to isolate for 14 days. Those found guilty of breaking the orders face a maximum fine of $750,000 or six months in jail.

“Last night (early today) at 1:24 AM, [redacted] OPP attended the property with no notice and no announcement or introduction and no police car lights on,” the father stated.

— Article continues below Petition —
PETITION: No to government and corporate penalties for refusing COVID-19 vaccine
Show Petition Text
103122 have signed the petition.
Let's get to 125000!
Thank you for signing this petition!
Add your signature:
Show Petition Text

“My daughter only heard loud banging on the door and saw flashlight(s) and car headlights, but no flashing police lights and frantically locked herself in the bathroom and called me in Oshawa,” he said.

“I am two hours from a terrified daughter asking me what to do, Daddy, if the intruders enter the house and abduct her or whatever. We called 911 from Oshawa and were informed within about another 10 minutes that it was the police doing a quarantine checkup (at 1:24 AM?),” he stated.

“Meanwhile my daughter can hardly breathe and I’m helplessly left to wonder what is to become of my daughter. My other son was contacted the Sergeant [redacted] who callously stated that this is a pandemic and police can do what they want.”

The father is filing an official complaint with the OPP detachment and “considering media contact and legal action for significant suffering damages,” he said.

“What are OPP doing terrorizing a single female law-abiding citizen following quarantine guidelines as set out by your government in the middle of the night?”

Independent MPP Hillier told LifeSiteNews that “the family and myself are seeking to resolve this,” but that he could not speak on their behalf as to what the resolution might be.

There “could be other legal actions,” he suggested. “I think we can all see that the actions that happened were intolerable.”

OPP reached out and apologized: spokesman

The officer in question serves at OPP Central Hastings detachment, but the force does “not release the names of officers involved in specific incidents,” OPP spokesman Bill Dickson told LifeSiteNews.

He said the OPP has apologized for the timing of the quarantine check.

“A member of the Central Hastings OPP recently attempted to conduct a required compliance visit, under the Federal Quarantine Act, in the early hours of the morning,” Dickson said in an email.

“We are aware that this matter caused distress and was subsequently shared on social media.”

The OPP “has reached out the individuals involved in the incident to apologize for the timing of the compliance visit and moving forward, will ensure Quarantine Act visits are not conducted at unreasonable times,” added Dickson.

He did not comment on whether or not the officer identified himself as police in a timely manner, stating that the OPP “will not engage in a discussion in the media about an incident.”

Nor did he confirm if the father has gone forward with filing a formal complaint.

Hillier told LifeSiteNews that as a result of his social media post, “OPP brass” has reviewed protocols around quarantine checks and “verbally” assured him such incidents won’t happen again.

He’s also written OPP Commissioner Thomas Carrique for an assurance that there will be protocols for such compliance checks.

Hillier said that what’s particularly disturbing about the Flinton incident is the officer allegedly stating he could do what he wanted because this is a pandemic.

The incident comes after Premier Doug Ford, in response to media criticism he was being too lax in enforcing coronavirus restrictions, told police during a press conference in September to “bring the hammer down.”

“No, no, he can’t. I don’t care what the premier says,” said Hillier. “We must adhere to the rule of law. We must have regard and respect for people.”

Canada on path to “medical authoritarianism”

However, such incidents are not unusual in a Canada that is “descending down a scary path towards medical authoritarianism,” says Jay Cameron, lawyer with the Calgary-based Justice Centre for Constitutional Freedom (JCCF).

“That’s taking place across the country,” he told LifeSiteNews.

“Police are showing up and doing randomized checks. I've heard stories about people being compelled to present ID at the door to verify their identity. And it’s all to enforce the quarantine provisions,” Cameron added.

The “rigorous checks and balances” in Canada’s Criminal Code are “sorely missing and entirely absent in most cases” in the country’s new “health regime,” he said.

“The Charter says it protects against authoritarian state action, but governments are ignoring the Charter. That’s the practical reality.”

He pointed to an incident in Quebec City where police arrested and forcibly quarantined two people suspected of being infected with Covid-19 at a karaoke bar.

The Post Millennial reported last month that Quebec City health authority Dr. Jacques Girard explained during a press conference that patrons were told to wait for their test results at the bar, but some refused to do so.

As a result, he ordered two people “taken and forcibly placed into isolation by the state … and police cooperation was exceptional,” said Girard.

The individuals were not being held at home, he added.

“It is a location; we at the CIUSS [Government agency] have the power to provide for preventative isolations. It is happening.”

LifeSiteNews contacted Girard for a comment on the incident, but did not hear back.

Cameron underscored the disturbing aspects of the case.

“The police did the bidding of that one public health official. No judge was involved, no lawyers were involved, there was no bail hearing, there was no show cause hearing. It was all based on suspicion of infection of a disease that we know is nowhere as near as scary as we were told.”

Some provinces have put their own quarantine restrictions in place, he said.

Alberta Premier Jason Kenney’s UCP government has implemented a 14-day mandatory isolation period for individuals arriving from other countries that is a “house arrest provision” and does not even allow the quarantined individual to go outside for “mental health” and exercise.

“Locking down everything and harassing citizens for a virus that statistically is nowhere near as dangerous as what’s projected is draconian.”

The Trudeau government’s plans to expand federal “quarantine/isolation sites” across Canada is also a cause for alarm, added Cameron.

PHAC made 180,438 referrals to police since March

Public Health Agency of Canada (PHAC) media relations told LifeSiteNews in a statement that it and the RCMP rely on “regional law enforcement agencies to verify the compliance of travelers entering Canada,” and that “law enforcement is expected to use its discretion” in enforcing the emergency orders.

PHAC assigns “a priority level, either high, medium or low priority to travelers based on indicators gathered from the verification call(s) or from other sources, such as information referenced at time of border crossing,” it stated.

“PHAC is not able to provide the numbers of referrals that were sent to police as a result of Canada Border Services Agency flag.”

According to the PHAC statement, from the Mandatory Isolation Order’s implementation on March 25, 2020 until September 29, 2020, “a total of 180,438 referrals (high and medium) were made by PHAC to law enforcement for the physical verification of travelers.”

During that time, “a total of 52 contravention tickets and four summonses, have been reported to PHAC as being issued for offences under the Quarantine Act.”