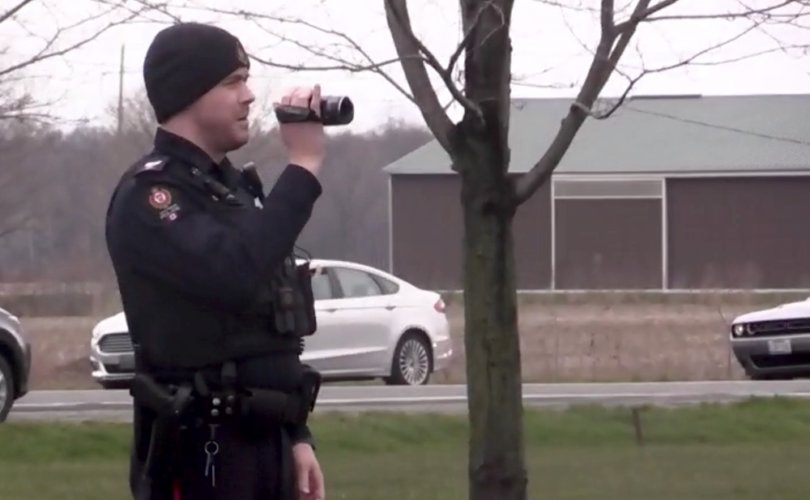 AYLMER, Ontario, April 28, 2020 (LifeSiteNews) – Police from an Ontario town say churchgoers taking part in a Sunday drive in service yesterday will “be held accountable” for allegedly breaking coronavirus social distancing rules, adding they will use video evidence they recorded of the event to back any fines issued as a result.

According to a local media report, around 70 or so vehicles showed up at the Church of God in Aylmer, Ontario for a planned drive-in style Sunday service.

The church had twice previously held a drive-in style Sunday service without any issues and with the full approval and permission of the local police, said the pastor of the church Henry Hildebrandt.

Hildebrandt said in a statement posted Saturday that police warned him that should he proceed with a third service, it would be “under the threat of hefty fines, disruption, and physical roadblocks by order of the Aylmer Chief of Police.” He did not agree with this assessment.

“Drive-in services at a place of worship are not illegal and there is absolutely no legal foundation for such a claim,” said Hildebrandt, adding, “Liquor stores are considered essential and their parking lots are not under any scrutiny. Liquor is essential, but God is not?”

On Sunday, police were on-site filming the service at the Aylmer Church of God but did not block the entry or exit of vehicles nor issue fines. Only the pastor of the church and a handful of others were on stage. Congregants were in their cars with their windows closed tuning in to a low wattage radio station broadcasting the service.

It is not yet clear when any violations will be served to either Hildebrandt or his congregants because they participated in the Sunday drive-in service. Local police say this could come soon.

“Today our officers were on scene monitoring the events and watching what was taking place. Just because the public didn’t see us handing out a ticket like a speeding stop, people will be held accountable for what happened today,” said Inspector Nick Novacich of Aylmer Police Service in a CTV news report.

“It’s no secret the officers were videotaping the event and we’ll review all that video and we’ll put a package together to present to the local county prosecutor to see what route we need to follow.”

Hildebrandt said that they followed all proper health and safety measures to not break social distancing rules. Despite police telling him to not proceed, he went ahead with the service.

“This is not a gathering because people are staying in their vehicles. There was no crowd to be seen anywhere. When I preach, I use my hands, my arms, half of my preaching is by my actions,” said Hildebrandt after the service had finished.

Hildebrandt noted that he told his congregants that they did not need to show up for the service.

“Whoever would like to join this morning, it's your decision, and you could possibly be ticketed. They showed up and were cheering me on,” said Hildebrandt in the CTV report.

“We’re not asking for special privilege or treatment. There were no parking lots as safe as ours this morning. We had no interaction before, during or after.”

Last week, Aylmer police Chief Zvonko Horvat said that he instructed his officers to begin to lay charges under the Ontario Emergency Measures and Civil Protections Act to any “faith-based organizations that break the order banning gatherings of more than five people.”

Ontario’s Emergency Management and Civil Protection Act says that it is against the law for more than five people to get together to conduct a religious service. Hildebrandt feels this a direct violation of religious freedom as protected under the Canadian Charter of Rights and Freedoms.

In his statement, Hildebrandt said he “attempted, unsuccessfully, to reach an acceptable compromise with him (the Aylmer Chief of Police) these past 6 days,” to be allowed to continue with his Sunday services. Hildebrandt said he even offered to hire two off-duty police officers to ensure no laws were being broken. This idea was dismissed.

Hildebrandt said that a now-deleted Facebook post showing a packed church parking lot at a past service may have had something to do with the sudden crackdown on the church services. In his statement, he says this Facebook post incorrectly caused outrage after people accused churchgoers of congregating inside the church. He says this is simply not true as people were always in their vehicles.

“Unfortunately, the Chief has also decreed that his officers must enforce the law as he interprets it, recklessly abandoning the discretion and interpretation used successfully in the past weeks, both here in Aylmer and across the country and the continent,” said Hildebrandt in his statement.

“One thing is clear to us at this moment, he finds himself on the wrong side of history and we extend our gratitude and pray for blessings and wisdom on the officers of the Aylmer Police Service as they are thrust into this unenviable position.”

Canada based Justice Centre for Constitutional Freedoms (JCFF) was retained by The Church of God in Aylmer last week to help them fight any potential fines and to ensure their religious liberty is respected.

Lisa D.S. Bildy, a lawyer for the JCCF provided LifeSiteNews with the letter they sent to Aylmer police on Friday, asking them to rescind their decision to go ahead and ticket church members.

“The restriction on public religious gatherings, in which people exclusively occupy their personal vehicles on a parking lot while worshipping, is irrational, unnecessary, and not a minimal impairment of Charter rights,” said Bildy in the letter.

“Government authorities like the Aylmer Police Department may only infringe Canadians’ constitutional rights if such authorities can demonstrate a pressing and substantial justification for doing so. There is no justification for prohibiting people from parking in the same parking lot for a drive-in religious service when drive-thru restaurant windows and grocery stores are open.”

The incident in Aylmer is only one of a growing number of police actions resulting in fines regarding the breaking of social distancing rules in Canada.

Recently, an Ontario pastor was fined $880 for violating “social distancing” health rules because he held “a seder night” at his residence.

In early April, a Calgary, Alberta street preacher was fined $1200 for breaking social distancing health rules after refusing to cancel a street service which included feeding the homeless.

Also, health authorities from Saskatchewan banned a drive-in Easter Sunday service at a small-town Canadian church, saying it would have constituted a “mass gathering” in violation of its coronavirus health orders.

The JCFF served a legal warning to the Saskatchewan Health Authority, saying it violated the rights and freedoms of worshipers from the Nipawin Apostolic Church.

The Government of Saskatchewan later reversed the decision by its health authority banning drive-in religious services and issued guidelines that recognize the right for churches to hold such services as long as safety precautions are heeded.

A few weeks ago, the JCCF warned that Canadian’s rights are being trampled because of the coronavirus lockdown measures.

Pro-abortion Prime Minister Justin Trudeau said in late March that, “all options are on the table,” when it comes to combating the coronavirus. This includes leaving the door open to the possibility of tracking Canadians cell phones either via a dedicated app, or through one’s cell phone provider.

Canada has been in a nationwide lockdown since early March, with all public schools, churches, sporting events, sit-down restaurants, and most stores deemed non-essential, shut. As of today, Canada has registered just under 49,000 cases with 2701 deaths.