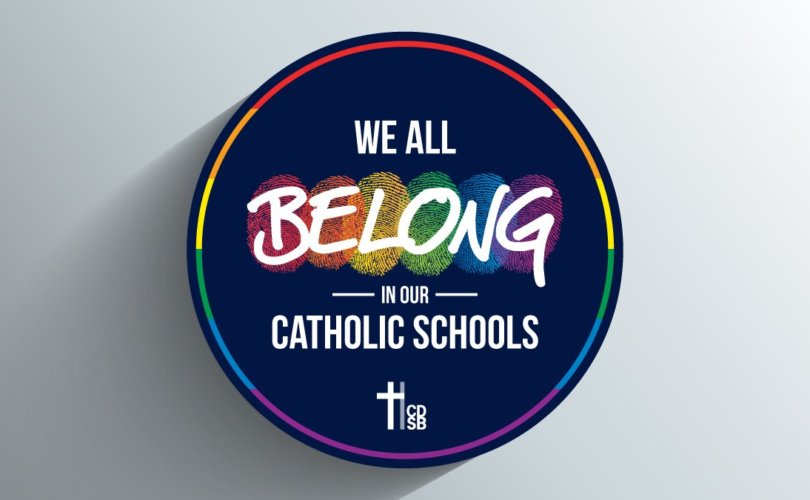 OAKVILLE, Ontario (LifeSiteNews) — A recent report revealed that a Halton Catholic District School Board (HCDSB) trustee who has a history of supporting pro-LGBTQ policies was charged with 12 counts of fraud earlier this year.

Nancy Guzzo, who voted in favor of flying a “gay pride” flag at all Catholic schools during “pride month,” was charged by Hamilton police on January 21 with 10 counts of fraud under $5,000 and two counts of fraud over $5,000 in relation to a previous job she held as assistant business manager at the Laborers’ International Union of North America (LiUNA).

According to Guzzo’s social media, she worked for LiUNA’s Local 3000 between March 2018 and April 2019, and before that acted as a treasurer for the company’s Local 1110.

Guzzo, who is still an active member of the Catholic board, released a statement last Friday addressing the allegations.

“What I can disclose, is that I was a 20-year employee of LIUNA until March of 2019, at which time I was dismissed without cause. I cannot comment further, but I look forward to being able to share my side of this situation as this legal process plays out.

I remain committed to upholding my duties as trustee for the Halton Catholic District School Board. I will continue to advocate passionately for the students and families served by our system, and I will always ensure the voices of my constituents are heard at the board table.”

According to Board chair Patrick Murphy, the school board has been aware of the charges but maintains that removing her from her post is unnecessary thus far.

“We understand that this is a pending legal matter that is currently before the courts,” Murphy stated.

“As these allegations are not in connection with her role as trustee, this matter falls outside of the purview of our board,” he added.

Criminal charges notwithstanding, Guzzo’s voting record has been a major cause for concern among faithful Catholics in the area, who feel as though Guzzo is more committed to politics than upholding the Catholic faith.

In April, Guzzo voted in favor of another trustee’s motion to “fly the Pride flag outside all [Catholic] schools throughout the month of June, as well as put up Safe Space posters in every classroom,” saying the action would show “we support and are welcoming of all students, staff and community members.”

“I feel had it been one of the ‘conservative’ trustees [charged with fraud] they would have been basically tared and feathered,” the resident added. “There would have been an extreme backlash, and then also I’m sure the senior administration would have definitely done something to have them removed.”

The proposal was ultimately rejected by the board, but according to Oakville News, the rift between those who supported the anti-Catholic proposition and those who rejected it led to “dysfunctional” and “shameful” behavior on the part of the trustees.

“The actions and conduct of some of the trustees during the board meeting were shameful as they seemed to take every opportunity to delay, obstruct and talk about anything other than the possibility of flying this flag and what it would mean to staff and students,” said trustee Peter DeRosa, who voted against the pro-LGBT proposal.

“HCDSB had a chance to act as a leader in the Catholic school system and instead showed a deeply divided, dysfunctional board room,” he added.

Echoing the sentiment of the person who spoke to LifeSiteNews, DeRosa suggested that the “pride flag” proposal was “political” and that the motion was destined to fail as there is a “silent majority” of people that do not support the pro-LGBT agenda but “are reluctant to speak out for fear of repercussions.”

The authentic teaching of the Catholic Church, as stated in the Catechism of the Catholic Church, informs its members that “homosexual acts are intrinsically disordered” and that homosexual acts “are against the natural law, are closed to the gift of life, and do not proceed from a genuine sexual complementarity,” adding that “Under no circumstances can they be approved.”

Guzzo’s support for the LGBT agenda is not the first time an Ontario Catholic school board has come under fire by faithful Catholics for their anti-Catholic conduct.

In September, Toronto Catholic District School Board trustee Michael Del Grande blasted fellow members after he realized a new member had not been required to swear the adhere to the Catholic Magisterium upon his installation as a trustee.

According to Del Grande, Catholic trustees have always been required to take an oath when they were installed as members of the board, promising before God that they are committed to upholding the faith.

“I’ve got grave concerns that we are really drifting.”