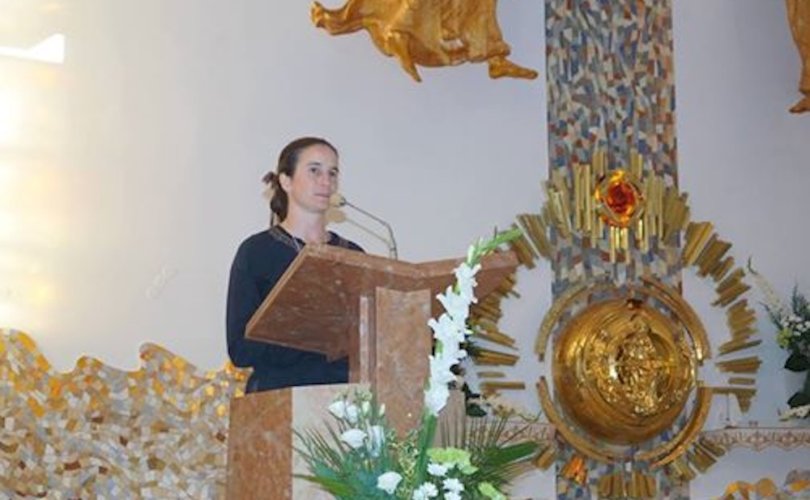 VANCOUVER, BRITISH COLUMBIA, September 11, 2019 (LifeSiteNews) — Famed Canadian human rights defender Mary Wagner was convicted of trespassing and interference with the operation of a business, following months in jail after she entered a Vancouver abortion facility to inform expectant mothers about alternatives to abortion.

In a statement on Facebook, Wagner said, “This conviction is nothing I am ashamed of. On the contrary, I am pleased that the court has found there is enough evidence to conclude that I interfered with the business of destroying helpless unborn children, who remain unprotected and abandoned by the courts.”

According to the Facebook account, Wagner is to be released today but remains in custody of the court.

In a telephone conversation with LifeSiteNews, defense attorney Peter Boushy said the Vancouver court found Wagner guilty on charges of mischief under section 430 of the Criminal Code but sentenced her to time served in jail. She had been in jail since her arrest on April 17. According to Boushy, she served 148 days in prison. Canadian law credits each day served in jail pre-trial at the rate of 1.5 to one, which means that Wagner has already served more than the maximum sentence allowable for the offense attributed to her. While the Crown asked for three years of probation, the court allowed only two years.

During the sentencing, Judge Mark Jette said to Wagner directly, “I appreciate that you come from a strong and good family and that you are a good person,” said Boushy. While the Crown had asked for 30 days of community service as part of the sentence, the judge said, “I’m satisfied that you give back to the community on a daily basis. It’s in your DNA.” Boushy said that he had never heard such a compliment from the bench before. He noted that the judge referred to Wagner as a “warrior” during his remarks. Wagner will not have to render community service as part of the sentence.

Boushy said cases such as Wagner’s “bring into sharp focus Christian witnessing.” He noted that her supporters are a handful of Christian women, whom he described as “gentle, humble, graceful, loving and truthful.” They exhibit the same characteristics as the female followers of Jesus Christ who were with Him on the road to Calvary, he said. “At the end of the day, a true Christian is imbued with the Holy Spirit and can actually ‘see’ the horrors of abortions.” In apparent reference to the Gospel of St. Mark, Boushy said Jesus used parables because his listeners could not otherwise “see” what He was talking about. “That whole idea is brought into focus in these cases,” Boushy said and noted that Wagner’s supporters are joyful. “Thank God for them,” he said.

On Monday, according to her mother, Jane Wagner, Wagner took the stand and said that she had entered the abortion facility in Vancouver in April to “offer hope and love to the mothers about to abort their children,” while describing options and support that are available. While witnesses summoned by the abortuary said she had interfered with their business, slowing down the process of killing and wasting their time, attorney Boushy said his client was doing nothing but communicating with the patients, which is not unlawful.

In a summary of the proceedings offered by “Alba,” who was present in the court, Boushy said Wagner had come to the abortion facility to speak to the patients, while giving away roses and papers that offered contact information about available help. According to Alba, Wagner was not forcing patients to do anything, and she provided information that they might not have known about otherwise. “Mary didn't push, touch or hurt anyone, she was only communicating,” wrote Alba.

In Wagner’s defense, attorney Boushy cited for the court what had been done in similar cases in the past. According to Boushy, Canada’s criminal code provides that if mischief was committed for the purpose of communicating, it can afford a defense for the accused.

According to Jane Wagner, her daughter was “astonished” by the support she received from pro-life advocates abroad. Jane wrote that she “doesn’t care if she is found guilty. She is proud to be guilty of interfering with the enjoyment of their grisly business.” Pro-life campaigners prayed and left roses outside the Canadian embassy in Argentina in tribute to Wagner’s practice of bringing the blossoms to the abortion facilities where she intervenes. They also lit candles and brought images of Our Lady of Guadalupe, the patroness of the Mexican people and all of the Americas, whom pro-life campaigners have adopted as their own. The miraculous image of the Virgin Mother of God is said to depict her during her pregnancy with the Savior.

Support for Wagner came in the form of prayer from many quarters. In Argentina, pro-life champion Mariana Rodríguez Varela organized a group of pro-life advocates who assembled outside the Canadian embassy in Buenos Aires on Tuesday evening. In Washington, D.C., Fr. Bill Kuchinsky of West Virginia and other pro-life campaigners stood outside the Canadian diplomatic mission in support of Wagner’s witness. According to her supporters, people gathered at churches in Poland to offer prayers for her release. Rodríguez Varela told LifeSiteNews that Argentines gathered in churches all over the country to pray for her release.