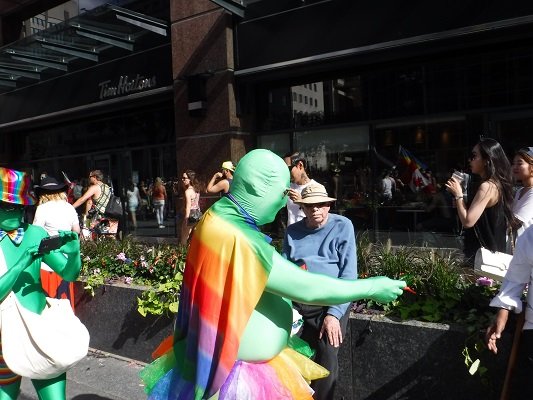 Bill Whatcott dressed as a 'Gay Zombie' handing out medical and Gospel information about same-sex activity.

August 17, 2016 (LifeSiteNews) – On August 15, Campaign Life Coalition was sent a letter and attached text of a Statement of Claim (notice of lawsuit) from a legal firm regarding the publication of the LifeSite report Christians dress as gay zombies to infiltrate Toronto Pride Parade with Gospel message.

The text of the cover letter is as follows:

Re: Hudspeth and Smitherman v. Whatcott, et at

We are the solicitors for Christopher Hudspeth and George Smitherman, representative plaintiffs in the above noted class action. With the couriered copy of this letter, we are enclosing a copy of the Statement of Claim in the matter issued on Thursday, August 11, 2016.

Your organization operates a website called LifeSite News. On your website there is a story by Pete Baklinski entitled “Christians dress as gay zombies to infiltrate Toronto Pride Parade with Gospel message” bearing a date of July 4, 2016.

Our clients take the most serious exception to this story. Most egregiously, and in particular, it contains an embedded link directing readers to Whatcott’s blog and the offensive literature that was distributed at this year’s Toronto Pride parade. What was distributed was not a “Gospel message,” but rather a hate speech contrary to the Criminal Code, as well as defamatory statements about the Liberals who participated in the Toronto Pride Parade.

By publishing this story with the link, you have published a libel against our clients and have acted in furtherance of Whatcott’s civil conspiracy.

Our clients require that you to take down the story immediately, or at a minimum, to remove the imbedded link. Failure to do so may result in further legal action against your organization without further notice to you.

Enclosure: Statement of Claim via courier

The full statement of claim and the originally formatted cover letter are displayed below.

Campaign Life Coalition does not operate LifeSiteNews, which is a separately incorporated and managed organization.

The attribution error aside, LifeSite has other objections to the demands and claims of the letter, which will be responded to by LifeSite legal counsel.

Our most serious concern is the attempt in this letter to suppress Canadian freedom of the press and freedom of expression, which LifeSite finds itself obliged to defend for the benefit of all Canadians, regardless of their respective views on controversial issues. Canadians of all views have a right to full information about what took place during the Pride Parade regarding the very newsworthy actions of the so-called “gay zombies” and the materials that they distributed at that time.