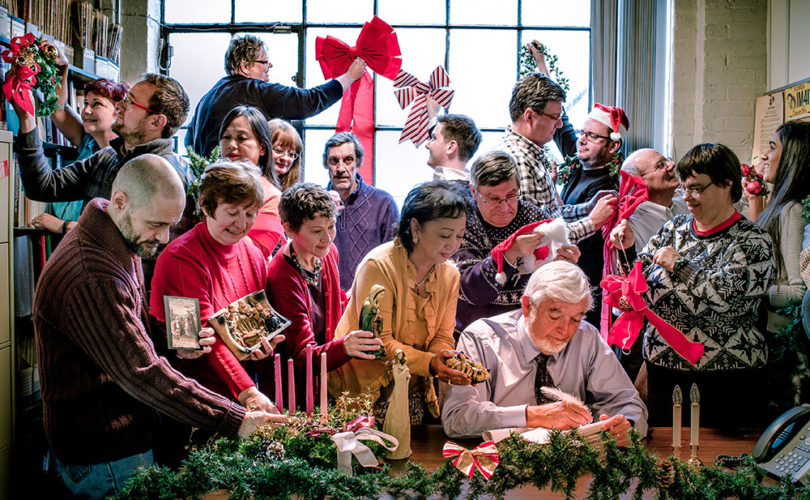 Photo of Jim Hughes and current office staff and regular volunteers that was taken for their 2015 Christmas mailing.

December 23, 2015 (LifeSiteNews) – In September 1997, LifeSite was launched as a new addition to the efforts of Canada’s national pro-life organization, Campaign Life Coalition (CLC). The person who directed me to initially create the website that soon became the LifeSite international news service, and who entirely funded LifeSite for its first several years of existence, was CLC president Jim Hughes. In its October 2015 edition of Legatus magazine, Legatus, the US-headquartered, influential organization for Catholic presidents and CEOs, featured Hughes in its cover page story on his extensive, almost 40 years of pro-life work.

The article, titled “Canada’s Pro-Life Warrior, Legate Jim Hughes’ 40-year fight for human life,” relates the accomplishments and challenges of its legate (member of Legatus), who was one of the 6 persons awarded Legatus’ highest pro-life honor, the Cardinal John J. O’Connor pro-life award, in 2006.

The article reports that Hughes, a successful businessman in the late 1970s, like myself a few years later, was shocked into pro-life awareness by a slideshow from the local right to life association. “I couldn’t believe what I saw,” Hughes told Legatus. “I said, ‘You gotta be kidding me that they can kill babies right up until birth.”

That “stark reality” of abortion eventually resulted in Hughes leaving his very successful business career and becoming involved in pro-life work full-time up to the present day.

In addition to his lead role in Canada’s largest and oldest pro-life organization and his Legatus involvement, Hughes is also a vice-president of International Right to Life Federation and a board member of LifeSite.

He fully used the skills gained during his business years to launch many first-time pro-life initiatives in Canada. He established the Parliamentary Pro-life Caucus to aid and support pro-life parliamentarians in Ottawa, the nation’s capital, in the 1980s. REAL Women of Canada was initiated from within the CLC offices in Toronto after strong encouragement from Hughes to Real Women founder Gwen Landolt.

Canada’s national pro-life newspaper, The Interim, was founded by Hughes in 1983 and is still going strong. Catholic Insight, an influential magazine dedicated primarily to frank discussion of pro-life issues from a Catholic perspective, was begun by editor Fr. Alphonse de Valk as a result of encouragement and initial office and other support by Hughes. He also played a major role in the launch of Faithful Insight, the new LifeSite run magazine targeted to a Catholic pro-life, pro-family audience.  Faithful Insight is meant to fill the vaccum created by the ceased publication of the print edition of Catholic Insight this year about a year after Fr. de Valk had resigned as its editor and publisher. An Ontario pro-life political party, The Family Coalition Party, was begun with major support from CLC in 1987. The Canadian March for Life, begun by CLC in 1997, has grown to over 25,000 participants this year.

Hughes’ quickly responded to the 1994 call of Pope John Paul II for pro-life groups to get involved at the United Nations to counter worrisome population control efforts by the international body.

Campaign Life Coalition was one of a small handful of groups that first sent representatives to lobby at the United Nations. They, along with many other groups that have since joined the UN efforts, have been astonishingly successful in convincing UN delegates to reject anti-life and anti-family proposals. CLC delegates have continued this specialized, multi-lingual effort at United Nations headquarters in New York almost every year since that time. Jim Hughes has even sent staff and capable youth volunteers to major United Nations conferences in Beijing, Cairo, Istanbul, Copenhagen, and other international locations.

As a result of this international involvement, CLC became a world leader in educating pro-life people about the international dimensions of the war against life and the natural family. Hughes has for years been relentlessly promoting this crucial information so that pro-life leaders may better understand what it is that they are really fighting against.

John-Henry Westen, co-founder and editor-in-chief of LifeSiteNews, told Legatus that, “In Canada, he is the face of the pro-life movement. Jim Hughes is like the Joe Scheidler and John C. Willke of Canada all wrapped into one.”

Peggy Hartshorn, of the Ohio-based Heartbeat International, told Legatus magazine, “Many people think that Canada is just like the United States, but we have much more support than the pro-life movement has in Canada. Canada is much further down the path of secularism, relativism and the loss of religious liberty.”

Legatus reports that “Under Hughes’ leadership, the Canadian pro-life movement has been successful at spreading awareness of the sanctity of life, but the pro-abortion politics of the nation’s leading political parties and secularized culture have presented major obstacles.”

The article reports the major role that Hughes’ Catholic religious faith has played in his daily efforts to protect the sacredness of human life in Canadian law. He has, however, gladly often worked with persons and organizations of all faiths over the years. One thing he has always insisted on is that CLC openly acknowledge the need for prayer and its dependence on God in all of its efforts. Hughes has made sure that all meetings begin with prayer and CLC office staff pauses each day for prayer at noon.

LifeSite’s John-Henry Westen is quoted in Legatus about Jim Hughes’ “tough guy image” that does not reveal a man who is actually a “deeply spiritual person.”

“He sort of presents as a gruff kind of guy, but underneath that exterior is a very caring man who has amazing spiritual insights,” Westen told Legatus. “Which to me, it makes a lot of sense because, honestly, how else do you survive with what we’ve been living with these last 40 years?”

“You know you’re doing God’s work and you continue to do it, although you don’t see the victories that you would have hoped for,” Hughes told Legatus Magazine. “The victory is really the changes in all the people who get involved.”

“When feeling discouraged or frustrated — or finding himself critical of some Church leaders for their apparent lack of support, Hughes says he spends time in front of the Blessed Sacrament.”

“I ask Him to fill me back up again, and then off I go,” Hughes said. “I put everything into God’s hands every day and then I try to do my best.”

Although LifeSite some years ago became separately incorporated from CLC into its current American and Canadian divisions with their own staffs and an office in Virginia, LifeSite leadership still frequently consults with Jim Hughes on the issues of the day because of his vast experience.  LifeSite has attended Legatus conferences with Hughes in recent years and reported on the many outstanding pro-life speakers and other individuals at those conferences.

Legatus has been awarding its annual Cardinal John J. O’Connor pro-life awards since 2001. For many years Jim Hughes has played a leading role on the Legatus Pro-Life Awards committee that vets and approves candidates for the annual award. The Legatus article on Jim Hughes lists all 59 past recipients of the award, most of whom have been the subject of LifeSite reports over the years and with whom LifeSite has developed fruitful, ongoing working relationships.