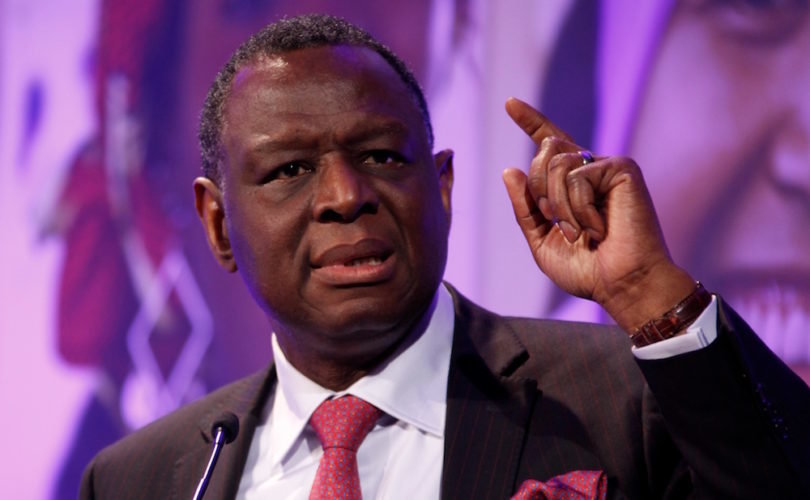 OTTAWA, March 18, 2016 (LifeSiteNews) — Canadian pro-life MP Garnett Genuis grilled the leader of the United Nations Population Fund (UNFPA) last week over what he said was evidence of the organization’s involvement in what the MP called “coercive family planning policies” in China.

But when the MP for Sherwood Park—Fort Saskatchewan provided evidence that UNFPA gave China $50 million in seed money in 1979 to fund an “information gathering system” integral to the population control program, UNFPA’s executive director Babatunde Osotimehin denied the charge.

“We don’t [fund the use of coercive family planning techniques]. There is not even one occasion where it has occurred,” he said, adding that the money was earmarked for “gathering information,” not for a “policy that actually coerced people.”

Not convinced, Genuis replied, “Your organization was involved in providing funding to an information gathering system that was necessary to facilitate the exercise of the program. Respectfully, sir, your organization has yet to apologize for what is, I think, very concerning involvement in coercive family planning programs in China.”

“If you would simply take a step back and recognize the coercive nature of those programs, and apologize for defending the activity of your organization and defending the program, I think that would clear the air, because … I have grave concerns about this history and what seems to me an unwillingness to face up to it,” he added.

But Osotimehin would not budge, stating, “We have worked in China with great dignity and respect for the Chinese government, and we have never been involved in coercive issues of family planning,” he said.

The exchange took place on March 8 during a meeting of the Parliamentary Committee on Foreign Affairs and International Development.

But life and family leaders from around the world have long accused the UNFPA of supporting China’s brutal “one child policy” since its inception and of providing millions of dollars in aid for various programs that support the policy and enable the government to forcibly abort the children of women who have transgressed the quota. Critics have noted how the agency has repeatedly deceived the public about its involvement in China, first by denying that forced abortions were happening, then by claiming that it was mitigating the severity of the program through its presence.

In 2002, then U.S. President George W. Bush halted funding for UNFPA when it was discovered by an independent investigation the previous year — and confirmed by a U.S. State Department investigation in 2002 — that the UN group supported restrictive laws and coercive population control tactics in China, including forced abortion and sterilization.

Colin Powell, then U.S. Secretary of State, stated at that time that “UNFPA’s support of, and involvement in, China’s population-planning activities allows the Chinese government to implement more effectively its program of coercive abortion.”

Reggie Littlejohn, president of Women's Rights Without Frontiers, told LifeSiteNews that if UNFPA was actually advocating for a relaxation of China’s brutal policy, as the organization claims, then it would be transparent about where it works in China and what it does in those places.

“We can’t do any investigation to see if there's been reductions in the forced abortions and forced sterilizations in the areas in which they have been operating, because they won’t tell anyone where those areas are,” she said.

“One of the big problems here is what appears to be a complete lack of transparency. I call on the UNFPA to open their records and to let us investigate. I want to know exactly where have they been in China and I want to be able to research whether coercion in those areas has actually been any less than anywhere else,” she added.

Littlejohn said that Osotimehin appears to not know the history of the organization he represents.

“He is either deeply uninformed or deeply misinformed, either of which is equally troubling. He needs to learn the history of his organization before he takes a public position that is so easily proved to be wrong,” she said.

The UNFPA has been a champion of contraception, abortion, prostitution, homosexuality, and other ideologies antithetical to the good of the family.

A UNFPA representative told a colloquium in Mexico in 2009 that high rates of divorce and out-of-wedlock births do not represent a social crisis, but rather a triumph of “human rights” against “patriarchy.” A 2012 UNFPA report called on governments to counteract “religious” objections to “emergency contraception,” which the report said stood in the way of fundamental human freedoms. A 2014 UNFPA report stated that laws against abortion, sex work, drugs, and same-sex relationships impinge upon the freedoms and potential of young people.

“I and other PRI investigators have visited areas in China where the UNFPA is directly responsible for running the local family planning program, and have repeatedly documented that forced abortions and forced sterilizations are in fact occurring there. The UNFPA is deceiving itself — and its foreign donors, including the governments of Canada and the United States — if it claims otherwise.”

Mosher said that, contrary to Osotimehin’s claim to Genuis that “we have to work in China,” the UNFPA is not forced to work anywhere, but chooses to work where populations can easily be curbed.

“The UNFPA is not forced to work in China. It is there because it approves of, and is eager to support, China's Planned Birth policy, under the terms of which the state has taken control of every reproductive system in the country.”

“The fact is, the UNFPA has never met a population control program, however horrific, that it did not embrace. That is why it has offices not just in Beijing, but in the capitals of other countries with forced pace population control programs, such as Pyongyang and Hanoi. That is why it willingly served as the ‘technical secretary’ of Peru's barbaric forced sterilization campaign of a few years ago,” he added.

Mosher said that it is simply impossible for anyone to deny that the UNFPA has worked “hand in glove with the Chinese Communist Party on the implementation of its planned birth policy from the beginning.”

“Osotimehin is perfectly correct in saying that ‘Coercive family planning’ is the national policy of China, but he should have gone on to state — in all honesty — that any organization that collaborates with this policy is collaborating with forced abortions and forced sterilizations,” he said.