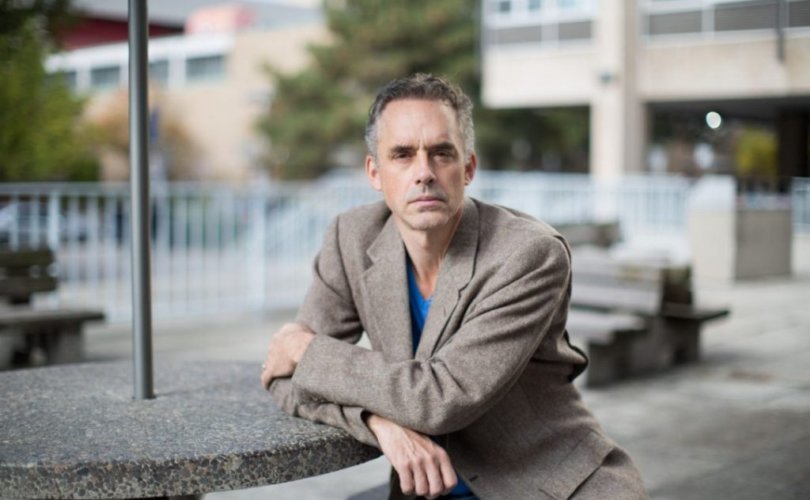 TORONTO, January 3, 2018 (LifeSiteNews) – In a recent video, Canadian freedom-of-speech advocate Dr. Jordan Peterson exposed how and why the extreme left dispenses with the concepts of objectivity, logic, and evidence.

Laurier student Lindsay Shepherd made headlines worldwide after she was called into a disciplinary hearing by two other professors for the apparent crime of having shown a clip of Peterson debating transgender activists on a publicly funded television show. Peterson, a psychology professor at the University of Toronto, shot to prominence through publicly opposing legislation that would force Canadians to use made-up pronouns for transsexuals.

In one segment of the film, Haskel reveals that he was astonished by a principle he found in the widely used university textbook Race, Class, and Gender: An Anthology: “Objectivity, as found through rational thought, is a western and masculine concept that we will challenge throughout this text.”

“It’s too bad that you’re shocked by that,” says Peterson. “The PC types have been saying exactly that since the 1970s. Make no mistake about this…. This isn’t something they’re secreting in. This is the dead statement.”

Peterson explained that the notions of logic, coherence and even empirical data are held in suspicion by the postmodernist intellectuals who rule the roost in contemporary universities.

“[They say] ‘Let’s question the definition of evidence’,” Peterson says on the video. “Because the underlying idea here is that all hierarchies are predicated on power.”

From this point of view, there is no disinterestedness, no love of truth: only desire for power.

“The reason I put forward something as evidence [from the postmodern point of view] isn’t because it’s evidence,” Peterson explains. “It’s because it’s evidence that I get to have that position of power. And so if you’re a postmodernist and you say ‘Well, I’m going to question your evidence’, what you think you’re saying is that you’re going to question my claim to that arbitrary power.”

Postmodernists don’t believe there is any evidence outside claims of arbitrary power, Peterson asserted: “The postmodernists dispensed with that [idea] in the 1970s. That’s [French philosopher] Derrida. That’s exactly what he said.”

This leftist obsession with power encroaches even on the hard sciences; postmodern activists see power structures even in scientific fields like biology and chemistry, Peterson explained.

“And so the next people on the hit list are going to be the biologists,” Peterson continues. “They’re already under attack from the social justice warriors”

“I’ve just read a paper that says mathematics is whiteness,” says Haskell. “I didn’t know that mathematics could have a race.”

“Yeah, but the thing is, there’s nothing illogical about these claims once you’ve accepted the central axiom,” Peterson replies. “Axioms are straightforward. The world [according to postmodernists] is a battleground of power hierarchies. That’s what it is. There isn’t anything else outside of that.”

Attempt to Wrest Back Control of the Narrative

Truth, to postmodernists, is merely the stories, or “narratives”, which keep a hierarchy going.

“[They believe] each power hierarchy generates its own internal narrative, including rules for what constitutes evidence that support and buttress the structure of that hierarchy,” says Peterson. “And because the hierarchies exclude, then it’s in the best interests of the people who are excluded to invert the hierarchy. And of course [postmodernists] also regard that as just, even though that’s part of the incoherence of the entire argument.”

Business professor McNally observed that “every dimension” of the Lindsay Shepherd scandal was  about power, including the “double-speak”, the idea that exposing people to ideas could be violent, and the “sacred circling around the victim group.”

Peterson, a professor of psychology, enthused that the attempts of postmodernists to make Shepherd the bad guy in the free-speech scandal were “so bloody interesting.” He noted the “unbelievable strategic attempt to transform Shepherd into the perpetrator and [professors] Rambukkana and Pimlott into the victims, especially Rambukkana as a professor of color.”

The President and Vice-Chancellor of Sir Wilfrid Laurier University, Dr. Deborah MacLatchey, eventually released a statement exonerating Shepherd of any wrongdoing, but before that the student was vilified by some of Rambukkana’s defenders.

“The reverse narrative was, well, Lindsay Shepherd was using something like her white privilege,” explains Peterson, “and her white tears … to harass a poor … untenured professor of color. There was every attempt on the part of people going after Shepherd to make that the narrative.”

“Deconstruction: The Lindsay Shepherd Affair” was taped on December 19, 2017 and posted on Facebook on December 26.