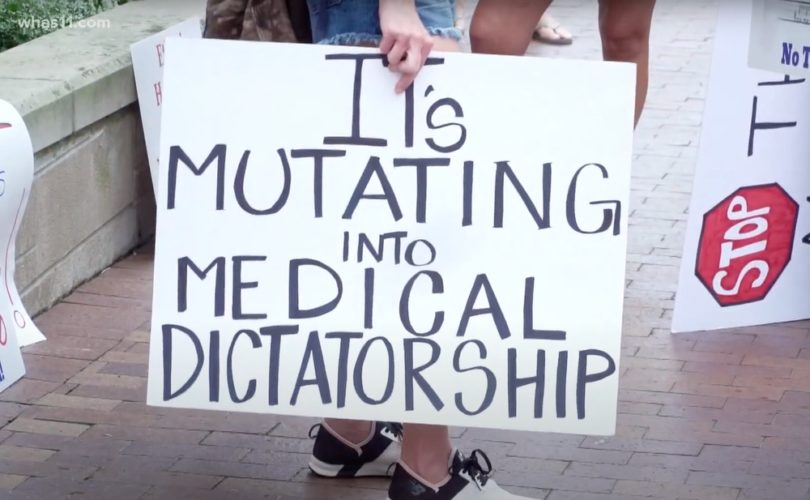 One letter was sent to the University of Waterloo in late August and is entitled Open letter to UW officials: Repeal the COVID vaccination and testing mandates. The letter was written chiefly by Dr. Michael Palmer, a medical doctor who now an associate professor in the chemistry department at university. Other professors and staff, as well as parents and students, have signed it.

The intent of both letters is to urge administration at the universities to rescind their vaccination mandates.

Palmer’s letter begins: “We, the undersigned employees and students, or parents of students, of the University of Waterloo (UW) herewith express our categorical disagreement with the COVID-related mandates recently imposed by the university administration on all employees and students… These mandates are unlawful, and their net effect will be to cause disease, not to prevent it.”

The letter also adds: “Any mandates involving vaccination, declaration of vaccination status, and testing violate all employment contracts that were concluded, as well as all offers of admission that were accepted before the mandates were imposed. The rights infringed upon include those enshrined in the Canadian Charter of Rights and Freedoms, the highest law of the land. Thus, the mandates are unlawful and invalid.”

— Article continues below Petition —
PETITION: Ban COVID vaccine mandates for schools and universities!
Show Petition Text
42773 have signed the petition.
Let's get to 45000!
Thank you for signing this petition!
Add your signature:
Show Petition Text

This refusal persists despite evidence that natural immunity is much stronger than vaccine-induced immunity. Dr. Robert Malone M.D., M.S. told Stephen K. Bannon of Real America’s Voice last Saturday that, according to new data he received, “natural immunity is about 20 times more protective than the vaccine is.”

The letter also calls into question the efficacy of the PCR test as a method with which to test healthy people: “While PCR methods have their legitimate uses in diagnosing infectious diseases, there is no good reason for using them on persons who are not sick… In contrast, PCR will also detect non-viable virus particles and even fragments of viral nucleic acids.” The PCR test has been criticized due to high rates of false positives and misuse of the test.

Both universities have in place vaccine mandates similar to those at other schools in the province. As at the University of Western Ontario (“Western”), where Dr. Julie Ponesse recently gave a powerful testimony about the unethical nature of vaccine mandates, those who receive exemptions must be subject to frequent testing if they wish to enter campus.

In the professors’ opinion, the vaccine policies at Wilfrid Laurier and Waterloo discriminate against the basic rights of the staff and students, and the mandate is not justified by science.

About discrimination the authors wrote: “The policy explicitly divides our university communities into two groups, the vaccinated and the unvaccinated, and then adds to the latter group a requirement to seek an exemption and to regularly undergo onerous biological testing—this falls squarely within the definition of ‘discrimination.’”

They also stated that the coercive nature of the mandates goes against the basic rights of Canadians as laid out in the Canadian Charter of Rights and Freedoms. They contend that the testing policies and insistence to disclose medical information violate the Charter protection that grants “Right to security of the person.”

Like the August letter, this September letter also called into question the scientific evidence used to justify the policies. The letter specifically noted the dubious efficacy of the COVID jab, given that it is still in an experimental stage: “Policy makers ought to provide and summarize for our university communities all available data demonstrating the efficacy of relevant COVID-19 vaccines, focusing only on conclusive, well-powered, randomized, double-blind, placebo-controlled trials that measure both short term and long-term immunity in university-aged samples.”

It is also claimed that “people’s ability to make ‘enlightened decisions’ about pandemic-related issues may have been compromised by governmental use of manipulative behavioral economics techniques, suppression and censorship of scientific views and media bias.”

After outlining their position and all their concerns, the professors ended the second letter by saying: “Based on the foregoing concerns, we request that the current Covid-19 vaccination and testing policy be repealed immediately and that it be replaced with a policy whereby students, staff, and faculty have freedom of choice regarding vaccination and testing.”

As of today, the letters have had no effect on changing the universities’ policy.