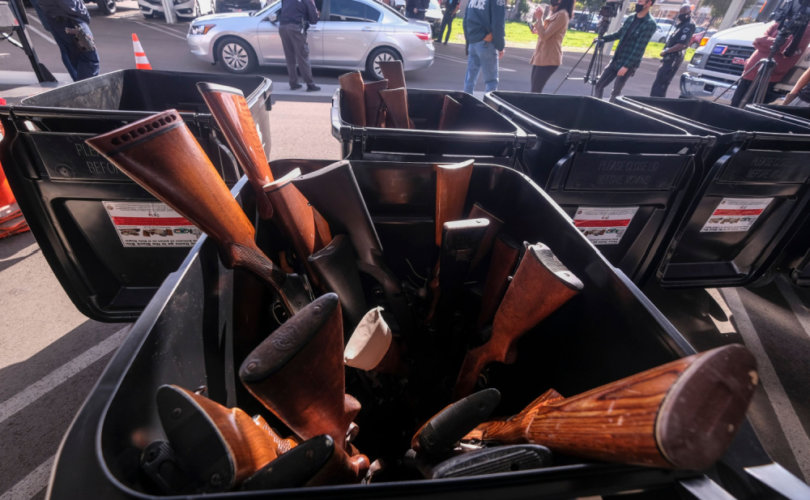 EDMONTON, Alberta (LifeSiteNews) – The Alberta government said it will direct national police in the province to not comply with a semi-automatic gun buyback program enacted by the Canadian federal government of Prime Minister Justin Trudeau.

Speaking to reporters yesterday, Alberta Justice Minister and Solicitor General Tyler Shandro said that “we will not tolerate taking officers off the street in order to confiscate the property of law-abiding firearms owners.”

Shandro said that he sent a letter to Deputy Commissioner Curtis Zablocki, the head of the Alberta division of the Royal Canadian Mounted Police (RCMP), telling him that taking away people’s guns is “not an objective, priority or goal.”

Shandro told Zablocki that “the RCMP should refuse” to comply with the gun-buyback program.

He said the directive he sent to the RCMP was in response to a letter from Canadian Public Safety Minister Marco Mendicino.

Mendicino’s letter to Shandro said that the goal of the Trudeau government is to start “buying back” guns in late 2022, but that he would need Alberta’s cooperation.

In a press release, Shandro noted that the letter from Mendicino was dated August 19. He said, however, that “Alberta is not legally obligated and has informed Ottawa it will not offer assistance.”

“Alberta taxpayers pay more than $750 million annually to fund the RCMP as our provincial police service. Alberta’s government expects that no tax dollars or police resources be wasted implementing a program that will not increase public safety,” the press release states.

Despite directing the RCMP to not comply with Trudeau’s gun grab, Shandro noted that the Trudeau government might still try and “direct the RCMP to serve as confiscation agents.”

Shandro said that should Trudeau try and do this, “Alberta will formally dispute any attempt to do so by invoking Article 23.0 of the Provincial Police Service Agreement (PPSA).”

Alberta chief firearms officer Teri Bryant said that Trudeau’s gun grab is an “ill-advised firearm confiscation program” and “another misguided step in the federal government’s efforts around the criminal misuse of firearms.”

“I do not believe that law-abiding Canadian firearms owners support these bungled efforts and have no confidence in the capabilities of the federal government to administer such a massive seizure of personal property securely and effectively,” Bryant noted.

After the Nova Scotia mass shooting in May 2020, Trudeau banned over 1,500 “military-style assault firearms” with a plan to begin buying them back from owners.

Legal gun owners possessing a Possession and Acquisition License (PAL) would, under the new ban, be barred from buying or selling, as well as transporting, or even importing a slew of guns the government considered to be “assault” style rifles.

Alberta looking to ditch RCMP to do its own provincial policing

Unlike many provinces in Canada, Alberta does not have a provincial police force. However, the current United Conservative Party (UCP) government of Premier Jason Kenney, who will be replaced by a new leader on October 6, has said Alberta should investigate ditching the RCMP and creating a police force.

The UCP is set to elect its new leader after Kenney announced earlier this year that he would step down.

Kenney faces poor ratings after his imposition of vaccine mandates and lengthy lockdowns during the COVID-19 so-called pandemic.

Should the RCMP comply with Trudeau instead of the Alberta government, which pays for their services, it is likely the public sentiment would shift toward quickly enacting an Alberta Provincial Police force.

The frontrunners in the race to replace Kenney, notably Danielle Smith, Travis Toews, and Brian Jean, have all said they oppose Trudeau’s gun grab, and have shown at least some support for an Alberta provincial police force.

Smith, however, went one step further and has been campaigning on her “Sovereignty Act” idea, which would prevent federal government overreach.

She said that as premier she would ban all police forces in the province from going along with Trudeau’s gun grab scheme.

A recent report has shown that the RCMP commissioner tried to plot with the Trudeau government to push gun control after a mass shooting in 2020.

In late May, Trudeau announced controversial plans to freeze all new and used handgun sales through Bill C-21. This bill has reached second reading stage in Canada’s House of Commons.

A 2018 report shows that there are approximately 900,000 handguns owned by Canadians.

Earlier in the year, Trudeau falsely claimed that Canadians do not have a right to use their guns for self-defense.