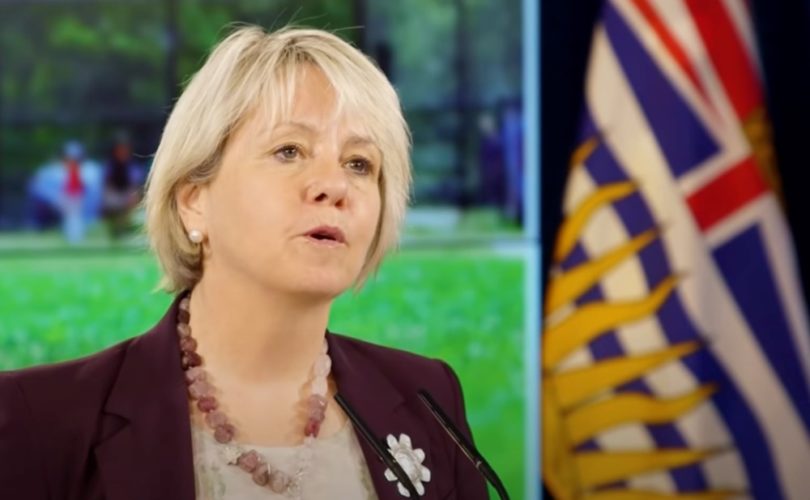 (LifeSiteNews) – Judges ruled in two important court cases in Alberta and British Columbia that health officers in those provinces are not above the law and must account for their roles in enacting COVID mandates and restrictions.

Henry had asked the court to throw out a petition submitted by the Canadian Society for the Advancement of Science in Public Policy (CSASPP).

Henry’s lawyers had argued that CSASPP was a purpose-built “anti-COVID-19 measures entity,” and did not have legal standing to challenge the COVID rules.

However, Coval did not agree, stating that Henry’s vaccine mandates and health orders did indeed affect “a defined and identifiable group” and that the orders, therefore, appeared to also affect their Charter rights.

“(CSASPP) alleges that its alternative proposals reflect a superior approach, taken in other Provinces and elsewhere around the world, much less intrusive on healthcare workers’ Charter rights,” Coval said. “In my view, this raises substantial questions that meet the threshold of ‘clearly not frivolous.’”

Coval added that the CSASPP’s petition did indeed look at “important and complex” healthcare issues and that the society had a right to legal standing.

“Also counting somewhat in favour is the evidence, albeit vague and inferential, of (the society’s) stake based on the health care workers amongst its membership,” Coval added.

CSASPP is representing approximately 41 healthcare workers who have been affected by vaccine mandates. The group is arguing that the province’s vaccine mandates are unconstitutional and that those refusing the jabs should have been accommodated.

According to its website, “The Canadian Society for the Advancement of Science in Public Policy (CSASPP) is a non-profit, non-partisan, secular, crowd funded, and volunteer driven organization that was created in response to popular community demand for a direct action initiative to counter BC’s COVID-19 related measures.”

Since October, healthcare workers in B.C. have been mandated to be double jabbed.

Indeed, the province has already fired many healthcare workers who refused to get the jabs.

Last month, the province, which is facing a large nursing shortage, said it will make it easier for foreign nurses to get licensed instead of allowing nurses who have refused the COVID jabs return to work.

Currently, Henry and the B.C. provincial government are facing multiple additional legal challenges to their COVID vaccine mandates, including one from the Justice Centre for Constitutional Freedoms (JCCF).

Hinshaw is currently facing a long-delayed civil suit regarding whether her public health orders, which resulted in many being fired, were constitutional.

The suit, brought forth by the JCCF in 2020, is representing churches, a gym owner, and other individuals who are fighting Hinshaw’s “unconstitutional” health orders.

“I find that, whether or not the evidence falls within the scope of public interest immunity, it is admissible as both relevant and necessary to fairly dispose of this case and to assist the Court in determining the facts upon which the decision in the case will depend,” Romaine added.

In early April, Hinshaw’s lawyers had argued that cabinet confidentiality prevented her from answering specific questions posed to her in court, on whether or not the provincial government of Premier Jason Kenney was behind her decision-making.

One of these questions, which in fact Romaine had been asked “in camera” or in secret in court, was whether Kenney or his cabinet had ever instructed her to impose more restrictions on places of worship or other venues, contrary to her advice.

As a result of Romaine’s ruling, Hinshaw must now answer questions in open court. However, the next dates regarding the trial are still yet to be determined.

Hinshaw was front and center for months as the official spokesperson for daily COVID updates in Alberta. She also at times announced rule changes imposed by the Kenney government.

She had argued that her draconian public health orders were only a “last resort” needed to protect the public from COVID.

Her public health orders, however, resulted in many government and private sector workers losing their jobs for refusing to get the experiential COVID jabs.

Also, countless businesses were closed for months on end. Families were prevented from seeing one another for months, and churches were forced to severely restrict attendance size. Also, those who refused the COVID jabs were banned for a time from eating out or attending certain venues as well as visiting family members.

Alberta Christian Pastor Artur Pawlowski was jailed for nearly two months after speaking out against COVID mandates while giving a sermon to truckers blockading the highway in Coutts, Alberta.

Last fall, Hinshaw was forced to apologize for incorrectly saying a 14-year-old died of COVID when in fact he passed because of terminal stage four brain cancer.

In March, the government of Alberta dropped a COVID jab mandate for healthcare workers put in place late last year. It also dropped its vaccine passport and mask mandates.

COVID vaccine mandates have split Canadian society, and the shots themselves approved for use in Canada have been linked to a multitude of negative and often severe side effects in children.