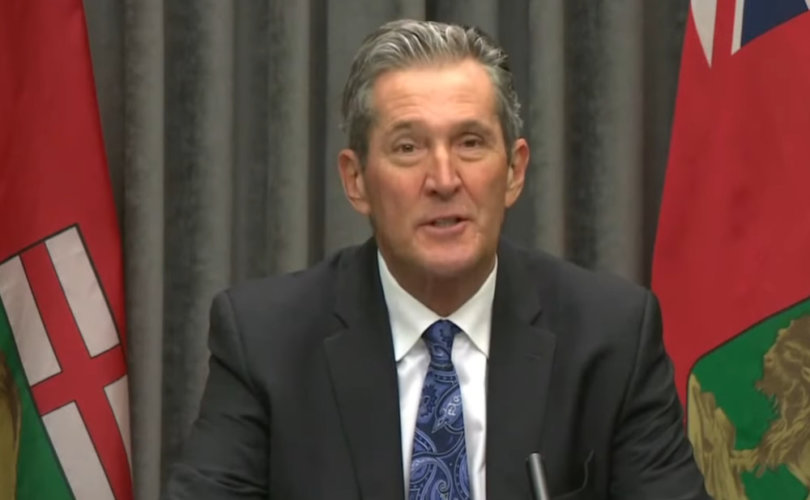 WINNIPEG, Manitoba, December 4, 2020 (LifeSiteNews) — The leader of one of Canada’s most locked-down provinces boasted on Thursday that he is “the guy who’s stealing Christmas” to keep people in his province “safe” from COVID-19.

“I’m the guy who’s stealing Christmas, to keep you safe because you need to do this now,” said the Progressive Conservative Premier of Manitoba Brian Pallister to reporters at the end of his Thursday press conference.

Pallister suggested that not getting together for Christmas is a way to “love” and “care” for each other.

“Stay safe, protect each other, love each other, care for each other, you’ve got so many ways to show that, but don’t get together this Christmas,” said Pallister.

Pallister and his government have enacted some of the most severe and restrictive COVID-19 lockdown measures in Canada, moving the entire province into the red “critical” phase of lockdown levels on November 12.

The current measures are set to expire on December 11, but the province’s chief public health officer, Dr. Brent Roussin, hinted that the harsh restrictions most likely will remain in place beyond that date.

The Manitoba government decreed that all churches “must close” and only “provide services virtually.” Before the “critical” lockdown level orders were enacted, regulations allowed churches in Winnipeg to operate at 15 percent capacity, and those in the rest of the province at 20 percent.

Social gatherings of any kind are not “permitted” in Manitoba, and only businesses listed as “critical services” can be open at 25 percent capacity. This means that gyms, movie theaters, recreation centers, and museums are being ordered to close. Restaurants can offer take-out only, but schools remain open.

Just recently, police in Winnipeg, which is Manitoba’s largest city and capital, put out a call to actively encourage its citizens to make use of COVID-19 “snitch lines” to report large private gatherings to the government.

Some churches — although not Catholic ones (as Winnipeg Archbishop Richard Gagnon closed churches, following government orders) — have fought back.

Only recently, the Manitoba Church of God in Steinbach was handed a CA$5,000 fine after defying COVID-19 restrictions to hold an in-person service.

The same church again defied COVID-19 rules banning all church services other than virtual ones last Sunday, and held a drive-in service which saw the police block the parking lot of the church. The pastor of the church, Tobias Tissen, forged ahead with the planned service but had to do so from the side of the highway with a loudspeaker in the back of a truck. He used the church’s Facebook page to give updates to his parishioners.

The Justice Centre for Constitutional Freedoms (JCCF) released a “comprehensive Charter analysis of the Manitoba Government’s lockdown measures,” going on to say that the Pallister government’s COVID-19 orders “violate the Charter freedoms of citizens to move, travel, assemble, associate and worship, all while crippling society and the economy.”

“The Province seems to have completely ignored the fact that Manitobans have Charter rights that protect their freedoms to assemble, associate, worship, and express themselves,” said Allison Pejovic, a Winnipeg-based lawyer and a member of the Manitoba bar.

“Manitobans are basically living under draconian restrictions. They are being told that they can’t see their loved ones and friends, buy their children Christmas presents at the stores, and come together in worship during the Christmas season.”

On December 2, the JCCF warned it will seek an injunction against the Manitoba government to allow drive-in church services if Pallister does not reverse course.

“Premier Pallister has two days to reverse this decision, or the Justice Centre will file for an injunction to prevent the continual enforcement of fines and tickets against church goers,” said the JCCF in their warning.

On December 3, the JCCF released a bombshell charter analysis called “Flying Blind,” which shows how the Canadian and provincial government’s own data indicates that COVID-19 lockdowns have caused more harm than the virus.

“Flying Blind explains how the risks posed by COVID-19 have been mischaracterized; governments have relied on speculation and exaggerated estimates to justify Charter-violating lockdown policies,” reads the analysis.

Pallister joins Ontario’s Premier Doug Ford, who in November said that he expects families to avoid “holiday parties or large family dinners” for 2020 in a politically correct announcement about “Holiday Season Safety” that did not mention Christmas at all.

In late October, Canada Prime Minister Justin Trudeau warned that unless “we’re really, really careful,” Canadians might not be able to celebrate Christmas with family and friends, despite the fact he allegedly broke coronavirus restrictions himself to visit his family this Easter.

As of today, Manitoba lists 9,172 “cases” of COVID-19 with 362 deaths attributed to the virus. The population of Manitoba is roughly 1.4 million, which means 0.03% of the province’s population has died due to the coronavirus.