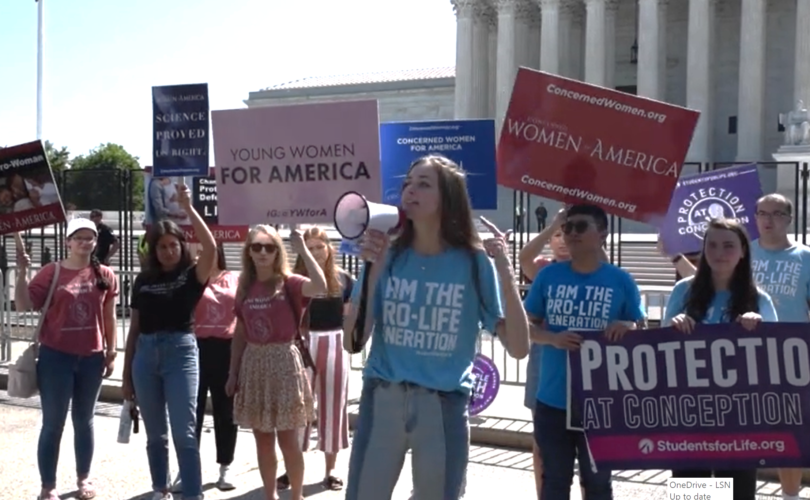 Pro-lifers in front of the Supreme Court prior to the Roe ruling.Rumble

(LifeSiteNews) – After news broke this morning of the U.S Supreme Court’s ruling overturning Roe v. Wade, the reaction from Canadian politicians and media pundits was swift, with many praising the decision but others venting a wave of disturbing anger.

“Tens of thousands of babies in the womb will be saved from death in states which proceed to make the child murder of abortion illegal. God is good,” said Fonseca.

The Archdiocese of Edmonton, Alberta, both retweeted the U.S. Conference of Catholic Bishops statement praising the news of Roe v. Wade being overturned, and had this pro-life message to say for itself.

“Continue to pray for the legal protection of life from conception to natural death in America and Canada,” tweeted the Archdiocese.

Perhaps the most egregious reaction came from Canadian Prime Minister Justin Trudeau, who said today’s U.S Supreme Court’s ruling overturning Roe v. Wade was “horrific,” and vowed to continue advocating for the killing of the unborn in Canada.

Canada’s Foreign Affairs Minister Mélanie Joly, with Trudeau at her side while in Rwanda today, said that today’s news is “a reversal of hard-fought gains by generations of women. And this decision will put women’s lives at risk.”

Others lambasted Trudeau for being two-faced.

“If you support a woman’s right to choose, then surely that must also include other medical procedures. No vaxx mandates. OK,” wrote twitter user @DevorguillaScot in reply to Trudeau.

Another user was blunt in his disapproval of Trudeau blasting today’s overturning of Roe v. Wade.

Well-known Canadian political commentator Viva Frei had this to say regarding Trudeau’s comments.

“You are such a hypocrite, it’s beyond words. Now talk about your vaccine ‘mandates’, and how you have imposed your will on millions of Canadian women @JustinTrudeau#TrudeauTheHypocrite #TrudeauTheTyrant,” tweeted Frei.

“While I recognize there are strongly held beliefs on this issue, reproductive rights in Canada are non-negotiable. I will remain focused on issues that unite Canadians, not divide us,” tweeted Charest.

Former Rebel News reporter Keean Bexte and now head of the Counter Signal, had this to say:

“Liberals literally want to kill children in the name of ‘bodily autonomy,’ but if you tell them you don’t want a state-mandated injection, you are the crazy one,” wrote Bexte.

“Suddenly they all seem to know what a woman is now. Strange how that works.”

Publisher of Western Standard Derek Fildebrandt said that those complaining about today’s news but supported COVID mandates, have no say in the matter.

“If you supported mandates over the last two years, your opinion on this matter is invalid,” tweeted Fildebrandt.

CLC President Jeff Gunnarson in a statement sent to LifeSiteNews said that his heart goes out to the “four million victims destroyed by abortion in what is the greatest human rights abuse in our nation’s history.”

Gunnarson said that what Trudeau said is “simply wrong.”

“There are two bodies when it comes to pregnancy: the mother and her baby. The baby inside the mother’s body has his own DNA, brainwaves, and a heartbeat separate from the mother,” noted Gunnarson.

“Our own Supreme Court made it clear in the 1988 Morgentaler decision that the state has an interest in protecting the lives of both the mother and her pre-born baby. It’s time for the Prime Minister to catch up with science when it comes to life in the womb.”