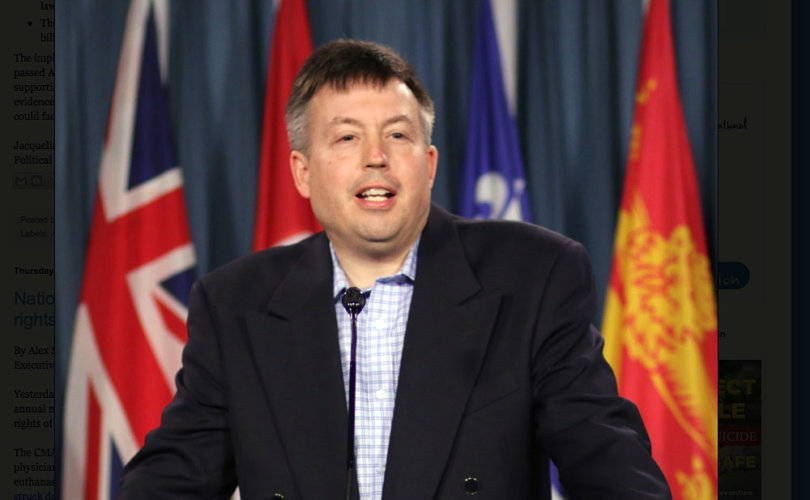 'Bill C-14 remains a dangerous bill that must be defeated,' says Alex Schadenberg, executive director of the Euthanasia Prevention Coalition.

OTTAWA, May 20, 2016 (LifeSiteNews) — The Senate legal committee’s May 17 report proposing amendments to the Liberals’ controversial euthanasia legislation “doesn’t actually deal with the worst parts of the bill,” warns Alex Schadenberg.

“Bill C-14 remains a dangerous bill that must be defeated,” says the executive director of the Euthanasia Prevention Coalition, who urged concerned Canadians to contact their senators with this message.

The range of recommendations in the pre-study report — 10 by a committee majority, eight by a minority — signal that Bill C-14 could be delayed in the Senate well past the June 6 deadline, when the Supreme Court’s Carter ruling voiding the law on assisted suicide and euthanasia comes into effect.

The House is expected to hold third reading vote on Bill C-14 on May 30, after which the bill goes to the Senate.

The report recommends an amendment that Bill C-14 limit euthanasia and assisted suicide to individuals with a “terminal” disability or disease.

And it proposes a conscience rights amendment which states that “a medical practitioner or nurse practitioner is free to refuse to provide medical assistance in dying; and that a social worker, psychologist, psychiatrist, therapist, other health care professional, or any institution is free to refuse to aid in the provision of medical assistance in dying.”

But it also recommends allowing advance directives for people diagnosed with degenerative diseases such as dementia, while calling for removal of  the bill’s clause that the government study allowing euthanasia for mature minors and solely for mental illness.

While the Senate report “improves some things,” conceded Schadenberg, it leaves intact the two sections of the bill regulating euthanasia and assisted suicide that “allow anyone to do it,” and “that says that the doctor or nurse practitioner must only be ‘of the opinion’ that you fulfil the requirements of eligibility.”

So if a doctor or nurse practitioner approves the death of a person who is incompetent, “no one can come back on them,” because they can state they were “of the opinion” the individual was competent to request euthanasia, he told LifeSiteNews.

He also said that the Senate committee’s proposed amendment on conscience rights doesn’t deal with the question of requiring medical practitioners to give their patients an “effective referral” to someone willing to kill them, the policy adopted by the College of Physicians and Surgeons of Ontario.

The Alberta Court of Appeal ruled May 18 that the Supreme Court’s Carter decision did not limit assisted suicide and euthanasia to those with a terminal illness or disease, nor did it, as Bill C-14 does, exclude people suffering solely from psychiatric illness, Schadenberg pointed out.

Meanwhile, the Liberals, in rushing Bill C-14 through the House of Commons ostensibly to meet the deadline, forced closure on debate at both second and third reading of the highly contentious bill.

The opposition roundly excoriated these moves, noting that the legislation is likely the most significant the House will ever face. As noted by Conservative MP Jason Kenney, to shut down debate on an “end of life conscience issue” is unprecedented.

Meanwhile, Prime Minister Justin Trudeau’s now infamous manhandling of Opposition whip Gordon Brown and elbowing of NDP Ruth Ellen Brosseau just before the May 18 vote to close debate on Bill C-14 delayed things further, as the the prime minister and his behaviour became the subject of a privilege debate that preoccupied the House Wednesday evening and Thursday morning.

With Parliament taking next week off, “Elbowgate” inadvertently pushed C-14’s third reading vote to May 30.

Now several senators say the bill won’t make it through the Senate by June 6.

“By the time we have debate at second reading, then it goes to committee for hearings and comes back, it just won’t happen, in my view,” Independent Liberal Senator James Cowan told iPolitics. “It’s a very serious bill and we can’t rush it.”

Conservatives Claude Carignan and Vernon White echoed that sentiment, with Carignan telling iPolitics that it would be “impossible to have the bill passed by June 6,” and adding that he didn’t think there would be a “legislative void” if that happened.

Schadenberg urged people not only to contact senators with their concerns over Bill C-14, but to attend the June 1 rally on Parliament Hill to protest the legislation.

Alex Schadenberg's points on the Senate committee’s report are outlined as follows:

The Senate Committee report, that was tabled makes several good recommendations and a few negative recommendations, nonetheless Bill C-14 remains dangerous bill that must be defeated.

1. Bill C-14 continues to allow anyone to cause death by euthanasia or assisted suicide.

No jurisdiction in the world offers legal immunity to anyone who does anything for the purposes of assistance in dying. These sections must be struck from the bill.

Currently, Section 241.3(a) makes it impossible to penalize any medical or nurse practitioner for approving or doing an assisted death in a manner that contravenes Bill C-14, since the bill only requires them to: “be of the opinion” that the person meets all of the criteria of the law. This is the lowest possible standard. “If the person was incompetent, the medical or nurse practitioner would only need to state that he/she was “of the opinion” that the person was competent.”

Bill C-14 will be deemed unconstitutional unless Section 241.3(a) is amended to state: ensure that the person meets all of the criteria set out in subsection (1).