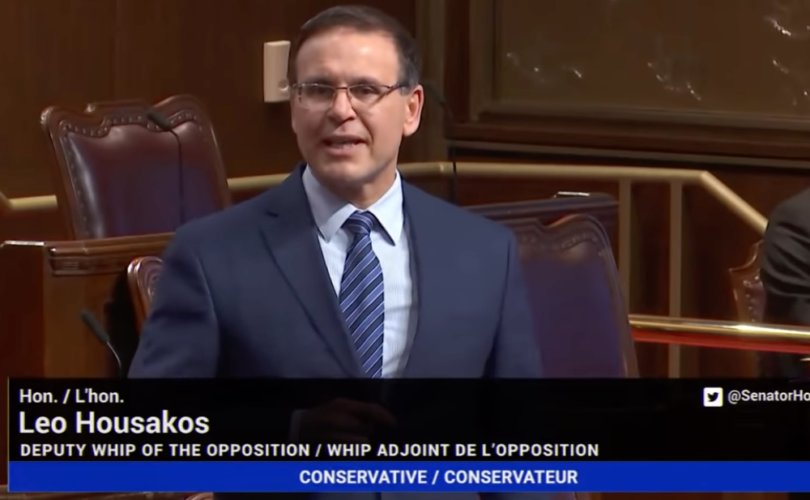 “When we become the laughing stock of other Western democracies, when we’re all over the front page news of the in the U.K. and in the United States and France and Germany, where I’m getting calls from parliamentarians and friends saying, ‘what’s happening to your great democracy?’ And I have no answer. I can’t explain it,” said Housakos.

Speaking to Canada’s Senate yesterday, Housakos took aim at the divisive words Trudeau used over three weeks ago when the Freedom Convoy was on its way to Ottawa.

“We see a government where one minute these protesters’ convoys were coming to Ottawa and they were marginalized by the Prime Minister, who called them a fringe minority, and the next minute, this ‘fringe minority,’ the small group of Canadians that are anti-vaxxers and anti-mandates, all of a sudden became such a threat that we had to impose something that’s been done in this country only three times before in the history of this country,” he continued.

“So clearly from that admission, the prime minister was wrong when he called this group a fringe group, a minority. Colleagues, it doesn’t take a genius to figure out that it wasn’t a fringe group. It isn’t the fringe group. This country is deeply divided like I’ve never seen in my 50-plus years or proud Canadian.”

“In these moments of an existential crisis, all prime ministers are obligated to bring the parties together, not to throw fuel on the fire, not to call protesters names, not to call them extreme right or extremists or racists,” said Housakos.

“That kind of political posturing is completely unnecessary, and we saw this government do it in the last general election where they tried to create the atmosphere of them versus us.”

During his 16-minute speech, Housakos said that Canada is “divided like I’ve never seen,” adding that it is in these moments “when the executive branch of government and every prime minister has an obligation to put the nation’s interests above the interests of himself, his party, and partisan politics.”

“Prime Minister Trudeau said at the beginning of this crisis, we’re all in this together. That’s what he said. Said We’re going to be in this together unless we have your back. But unless you’re a trucker, if you’re a trucker, you’re on your own. Unless you’re not willing to accept a medical procedure, if you’re unwilling to take a vaccine, you’re on your own in a big way,” said Housakos.

Housakos noted how former Conservative Prime Ministers such as Stephan Harper, and even past Liberal PMs such as Jean Chrétien, always “put the nation first, regardless of political differences at various times.”

Shortly after the Senate debate regarding the EA on Wednesday, Trudeau announced that he was ending the EA, saying “the situation is no longer an emergency.”

As a result, the Senate later in the day withdrew its debate surrounding the EA.

‘Frustrated Canadians’ are not ‘enemies of the state’

Trudeau took the unprecedented step of enacting the EA on February 14. He claimed this was necessary to deal with the truckers from the Freedom Convoy, which had been in Ottawa for the past three weeks protesting COVID mandates.

The EA allowed the government the power to freeze the bank accounts of anyone associated with the convoy without a court order. It proceeded to put a block on several accounts.

Canada’s Minister of Finance and Deputy Prime Minister Chrystia Freeland admitted Wednesday that the reason some Freedom Convoy supporters’ bank accounts were frozen under the EA was to “convince” them to “listen to reason,” adding that some accounts will stay locked.

Neither Trudeau, nor anyone from his government, ever personally met with any of the protesters.

Housakos ripped Trudeau for not doing his “job” as a leader.

“We have an obligation, particularly as parliamentarians, as a prime minister, whoever it is to dialog with these people,” said Housakos.

“It’s the right to protest in this country. It’s a responsibility, though, of the parliament and our prime minister and our governments to dialog with these citizens. These are not enemies of the state. These are frustrated Canadians.”

Canadians must have ‘freedom’ to decide whether to take COVID shots

Housakos touched on one of the main reasons the trucker Freedom Convoy began: COVID mandates, including coercion to take coronavirus shots.

“These are rights that should be fundamental in the country. So, when these protesters come to Ottawa, there should be consistent rules for all Canadians.”

Housakos also said that the Trudeau government should have, like many Canadian provinces, ended COVID mandates.

“The only one who has tripled down and is refusing to eliminate those mandates is Prime Minister Trudeau. And at this point, we see there’s no good reason for it, except he doesn’t want to acknowledge political defeat,” said Housakos.

Yesterday, Conservative Party of Canada (CPC) MP Pierre Poilievre, who is running to become the leader of the CPC, announced that Housakos will be one of the co-chairs for his campaign.