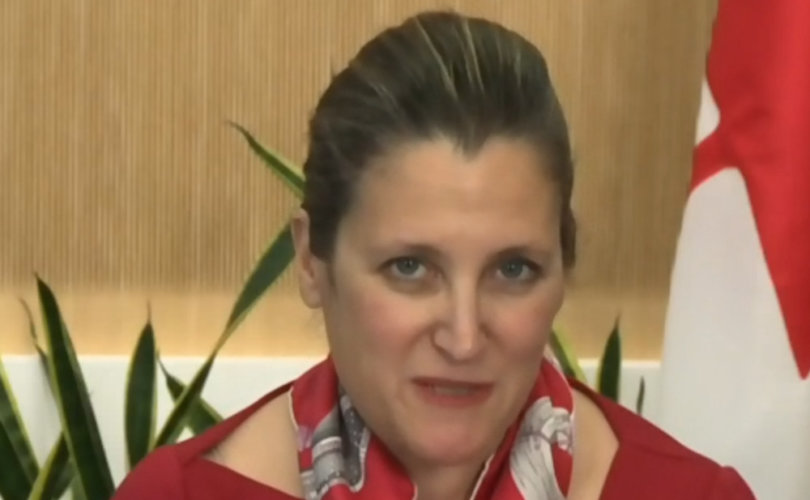 OTTAWA  (LifeSiteNews) – The Canadian Senate is currently in the second reading session for a bill that seeks to develop “a national framework for a guaranteed livable basic income.”

Amid the chaos of Canadian politics in recent months, the Senate proposed and is now in the second reading of Bill S-233. The bill, if passed, would require the Minister of Finance to develop a national system to provide “guaranteed livable basic income” to everyone in Canada over the age of 17.

“The Minister must develop a national framework for the implementation of a guaranteed livable basic income program throughout Canada for any person over the age of 17, including temporary workers, permanent residents and refugee claimants,” reads the text of the bill, which was first introduced in the Senate in December of last year.

“In developing the framework, the Minister must consult with the Minister of Health, the ministers responsible for employment, social development and disability, representatives of the provincial governments responsible for health, disability, education and social development, Indigenous elders, Indigenous governing bodies and other relevant stakeholders, including policy developers and political decision-makers, as well as experts in other guaranteed livable basic income programs,” adds the bill.

According to the bill’s text, some of its goals are to “create national standards for health and social support,” as well as a data-gathering measure to determine “what constitutes a livable basic income for each region in Canada” by “taking into account the goods and services that are necessary to ensure that individuals can lead a dignified and healthy life, as well as the cost of those goods and services in accessible markets.”

The bill is still in the early stages, and for it to pass, it would need to be approved by the Senate, and then go on to the House of Commons to be approved there as well.

While inflation and high cost of living is seen as a problem within Canada and the Western world more broadly, many are skeptical of such an approach because it would result in massive government intervention and control over personal finances.

In fact, the bill seeks to employ the Finance Minister Chrystia Freeland as the head of the project, who earlier this month took the unprecedented step of demanding that banks freeze the accounts of anyone involved in the Freedom Convoy protest in Ottawa, without a court order.

Freeland is also a member of the Board of Trustees for the World Economic Forum (WEF), the group behind the now-infamous “Great Reset,” an agenda that critics say seeks to install a global system similar to that of China’s Social Credit System.

According to prominent retired American politician Ron Paul, implementing a universal basic income is one of the major goals of the WEF’s Great Reset global socialist plan.

“The Great Reset involves a huge expansion of the welfare state via a universal basic income program. This can help ensure compliance with the Great Reset’s authoritarian measures,” Paul wrote last year, adding that the “authoritarian” measures outlined in the Great Reset include a dramatically expanded “surveillance state via real-time tracking,” the “use of brain scans and nanotechnology to predict, and if necessary, prevent” non-government approved behavior, and “digital certificates” in order to travel.

“[The WEF] envisions an authoritarian system where big business acts as a partner with government. Big business would exercise its government-granted monopoly powers to maximize value for ‘stakeholders,’ instead of shareholders. Stakeholders include the government, international organizations, the business itself, and ‘civil society,’” explained Paul.

He added that the “disastrous response to Covid is just the latest example of how those who give up liberty for safety or health will end up unfree, unsafe, and unhealthy.”

The retired congressman concluded, “Instead of a Great Reset of authoritarianism, we need a great rebirth of liberty!”