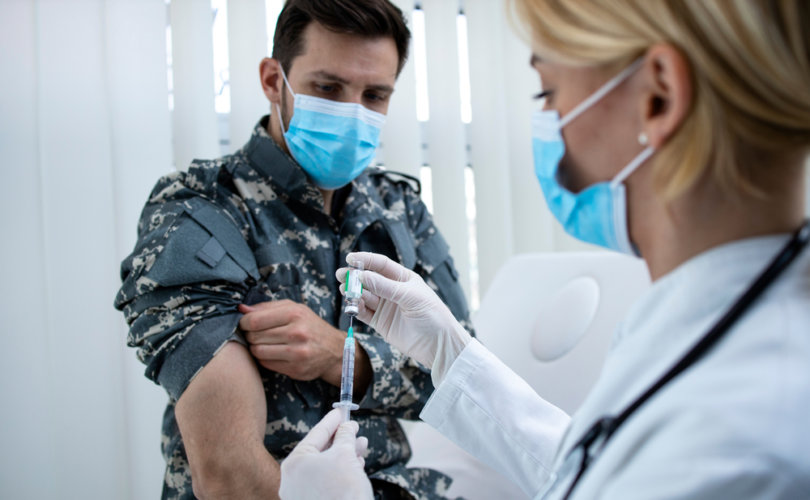 CALGARY (JCCF) – The Justice Centre has engaged well-known trial lawyer and former Combat Officer Phillip Millar to represent Shannon Jones, a healthy and skilled Canadian Armed Forces (CAF) member who will be kicked out of the military because she has refused the mandated COVID shot.

Miss Jones filed an application in Federal Court on May 24, 2022 for an injunction to fight what she feels is an unfair release due to the vaccinate mandate put in place by the CAF. A hearing will take place on June 6, 2022.

This will be the first of many injunctions sought to protect the serving military soldiers, and Miss Jones is just one of dozens of serving members of the CAF being represented by Mr. Millar on the basis of health concerns, religious or conscientious objections to the COVID injections.

Warrant Officer James Topp is another client. Mr. Topp is a member of the CAF reserve force facing the charge of “Conduct to the Prejudice of Good Order and Discipline,” which has the potential to result in Court Martial.

Mr. Topp, who has been a serving member of the CAF for 28 years, has gained national headlines for his 4,293 kilometre “Canada marches” walk across the country, in protest of mandatory vaccine mandates, forced quarantines, mandatory testing, and other conditions of employment or provision of services.

Mr. Topp began his march on February 20, the same day police forces began using physical force against unarmed Freedom Convoy protesters in Ottawa. Facing job loss for refusing a COVID shot, Mr. Topp is averaging 30 km a day along the highway. His goal is to reach the Tomb of the Unknown Soldier in Ottawa by June 22.

The CAF chain of command has been fast-tracking personnel out of the force if they are not granted a waiver, using the 5F release procedure.

Beginning in January 2022, the Justice Centre for Constitutional Freedoms received hundreds of requests from active military members for help and guidance about steps they could take to avoid being discharged unfairly under the 5F release procedure.

The Justice Centre maintains that military members are entitled to have their constitutional freedoms such as freedom of religion and conscience protected, as CAF members have fought and served to protect the freedoms of all Canadians.

— Article continues below Petition —
PETITION: Tell the CPC to reinstate conservative leadership candidates!
Show Petition Text
5367 have signed the petition.
Let's get to 6000!
Thank you for signing this petition!
Add your signature:
Show Petition Text

Mr. Millar, a former full-time Combat Officer in the CAF Infantry, former Assistant Crown Attorney, and experienced trial lawyer who has already successfully sued the Department of National Defence (DND) in the past, is taking an approach to fighting for the rights of CAF members that is different from other legal actions.

“Miss Jones’ life is being upended, her career destroyed and her pension put at risk without due process,” says Mr. Millar. “This is fundamentally a patched together policy designed to punish those who do not get in line with the political objectives assigned to DND policy from Ottawa.”

“There is inconsistency in how this policy is being applied, and it is unduly punitive and wrong,” he added. “We are asking the Federal Court to grant an injunction that prevents the military from kicking members out before their concerns are heard,” adds Mr. Millar.