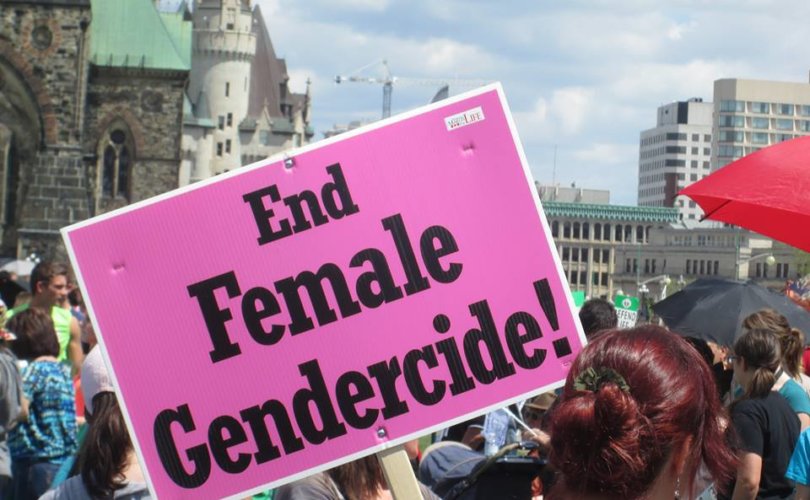 TORONTO, April 12, 2016 (LifeSiteNews) — Indian-born women in Ontario with two or more children appear to be choosing to abort their daughters in the second trimester of pregnancy, the time after which an ultrasound can reveal the sex of the baby, a new study suggests.

The study, headed by Dr. Marcelo Urquia from Toronto’s St. Michael’s Hospital and published April 11 in the Canadian Medical Association Journal, revealed that between the years 1993 and 2012, women who immigrated from India to Ontario and had two or more children gave birth to 138 boys for every 100 girls, while those with more than three children gave birth to 166 boys to every 100 girls.

By contrast, Canadian-born women in Ontario gave birth to 105 boys to 100 girls, roughly on par with the global average, according to a Canadian Press report.

While it’s against Canadian law to select the sex of a baby through in-vitro fertilization techniques, it is possible to know the sex of a baby in utero through ultrasound after 14 weeks gestation, Urquia told the Canadian Press.

The study suggests that immigrant parents from India are choosing to abort their daughters, as abortion is legal and covered by Ontario health insurance, he said.

Entitled “Sex ratios at birth after induced abortion,” the study concluded that the “high male:female ratios observed among infants born to women who immigrated from India are associated with induced abortions, especially in the second trimester of pregnancy.”

The study also noted that while “skewed male:female ratios at birth have been observed among certain immigrant groups,” the “data on abortion practices that might help to explain these findings are lacking.”

The Canadian Press reported that the ratio of boy to girl births rose to 326 boys per 100 girls “for Indian-born mothers with two daughters who had an abortion preceding her third birth” and to “409 boys for every 100 girls if the mother had more than one abortion.”

The study noted that the boy to girl birth ratio was “3.88 times higher if the induced abortion was performed at 15 weeks or more gestation relative to no preceding abortion.”

The authors stated that “prior to the live birth of a third child, one-quarter of women born in India who had previously given birth to two daughters underwent at least one induced abortion, and one-third of them underwent repeated induced abortions during that interim.”

According to the study, “among some women born in India, multiple induced abortions were performed in the short interval that elapsed between two consecutive live births.”

“These proportions likely underestimate the potential risk that a woman born in India will undergo an induced abortion after two daughters, because the natural probability of the next child being male is about 51%, which is independent of the sex of the previous sibling(s).”

“The strongest indication” of the preference for sons among Indian-born women in Ontario “was associated with abortions at 15 weeks or more gestation, most of which can be assumed to have been performed at a point in which the sex of the fetus can be accurately determined by ultrasonography,” the study noted.

Moreover, “after giving birth to two males, an induced abortion at 15 weeks or more gestation among women born in India was so uncommon that data suppression was required because of the small counts.”

Christina Alaimo of Campaign Life Coalition noted that the study underscores the tragic reality that “there is absolutely not one single law in Canada restricting abortion in any single way.”

“It’s sad and it’s ironic that there are laws for IVF that you can’t gender select, and yet for abortion you can,” she told LifeSiteNews. The government “won’t even let you choose to create a child with a certain gender, and yet they will let you destroy an already created embryo because of its sex.”