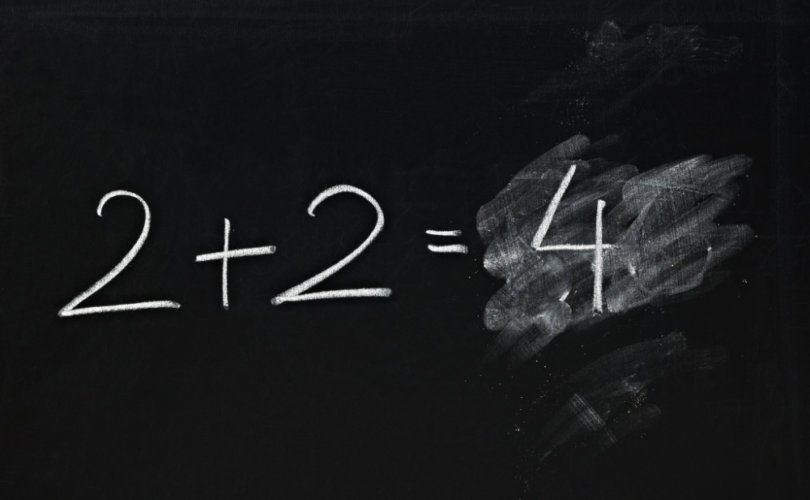 (LifeSiteNews) – A Canadian teacher from Ontario made the bizarre claim that basic mathematical equations such as 2+2=4 is somehow a form of “white supremacy.”

Heather Theijsmeijer, who serves as a math coordinator in Ontario, recently posted on Twitter, “There are many math education practices that we (white folk) don’t see as racist or supremacist.”

“Because they are so ingrained in our background and experiences (and we have been the ones to benefit from them.)”

The post from Theijsmeijer, which included a graph, was brought to light by Chris Rufo, who is a journalist and a Manhattan Institute senior fellow.

Rufo has been for some time calling out multiple cases of pushing critical race theory (CRT) in both large corporations as well as in municipal governments.

Theijsmeijer’s graph claims that “Covert White Supremacy” would include the 2+2=4 along with text saying “Assuming math is neutral,” and “Dismissing alternative algorithms.”

In a blog written by Theijsmeijer, she notes that she has stopped using the word “equals” when talking about equations.

CRT, as it is known, is a concept that claims “race is a culturally invented category used to oppress people of color,” and that all legal institutions in the United States are “are inherently racist.”

Theijsmeijer’s post is part of a larger trend in education in both Canada and the United States  that wants math to be taught using CRT ideology as a guide.

However, recent polls has found that most Americans oppose the indoctrination of students via LGBT and CRT-infused curricula.

Many school boards in the U.S. have already banned the use of CRT in the classroom. Also, some states such as Florida have banned CRT from teacher training, and others such as Oklahoma have banned its use outright.

In Canada, however, the province of Ontario’s new ninth-grade math curriculum is heavily infused with CRT ideology, claiming that math is a subjective method that normalizes racism because it emphasizes “Eurocentric mathematical knowledge.”