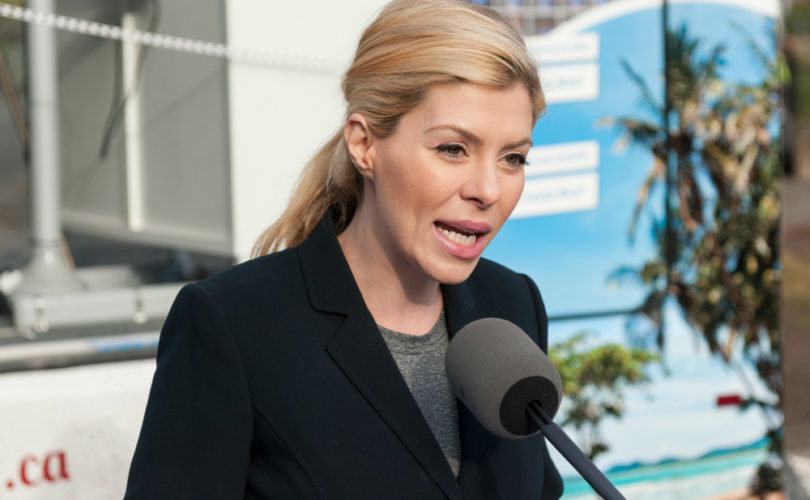 OTTAWA, February 9, 2015 (LifeSiteNews.com) — Conservative MP Eve Adams announced this morning that she is crossing the floor to join the Liberal Party.

At a press conference with Liberal leader Justin Trudeau, Adams was questioned on the timing of the move given her recent struggles in obtaining a Conservative nomination.

But she said, her decision is “actually about the fact that the party no longer shares my values. … I haven't felt at home in the Conservative Party now for many years.”

The only example she gave of a difference in values was abortion. “For somebody who so tightly controls policy initiatives and communications, … how is it possible that a woman's right to choose still comes to the floor of Parliament and is debated?” she asked. “How is that had we simply relied on Conservative members of Parliament, a woman's right to choose would be imperiled today? It took opposition members standing united, voting against that.”

Campaign Life Coalition, Canada’s leading pro-life group focused on politics, gave Adams a “yellow light” rating until this morning, when they changed her rating to a “red light” because her pro-abortion remarks.

Adams voted against MP Stephen Woodworth's Motion 312 to study whether a child in the womb is a human being based on the preponderance of evidence from modern medical science.

Canada needs a “leader who strongly and unequivocally respects a woman's 'right to choose',” rather than “fear-mongers and bullies,” said Adams.

Indicating zealously pro-abortion Justin Trudeau, she said, “We need a kind, generous and strong leadership that champions shared vision for how to make Canada work for everyone.”

Trudeau announced during last year's National March for Life in Ottawa that all Liberal MPs or those hoping to run for office under the Liberal banner must be pro-abortion.

“I can no longer support mean-spirited leadership that divides people instead of bringing them together,” Adams said, pointing to “policies like income splitting, which will devour the surplus without benefitting many Canadian families, or creating a single job” as an example of this divisiveness.

Adams failed to secure nominations as a Conservative in two separate ridings last year, which led to her announcement that she would not be running for re-election. She indicated today that she plans to seek a Liberal nomination in the Toronto area.

“I'd like to consider serving Canadians, and I believe Justin Trudeau and the Liberal Party offer the most positive, hopeful leadership available,” Adams said.

Trudeau praised Adams as wanting to be “her community's voice in Ottawa, not the prime minister's voice in her community,” then took a swipe at the Prime Minister, saying Adams has “seen her work restrained by a party focused on the politics of meanness and division.”